What is the future for Russia’s economy?

Russia’s economy is at a turning point. Following a decade of spectacular growth fueled by high energy prices, the country could either use its newfound riches to finance much-needed modernization and become a driver of innovation and growth, or muddle through by continuing to rely on its large yet maturing hydrocarbon base. Russia may either become the big R or the great absent in tomorrow’s BRICS.

In this context of uncertainty, the Forum has launched a year-long process to develop Scenarios for the Russian Federation to the year 2030. Building on the Forum’s previous competitiveness research and bringing together the wide-ranging stakeholders of the Russian economy, this project aims at challenging short-term thinking and conventional wisdom with regards to the country’s “business idea”.

The Scenarios for the Russian Federation revolve around a series of interactive workshops whose first iteration took place in Moscow on 27 February 2012, which brought together 20 of the Forum’s Russian Young Global Leaders and Global Shapers. These leaders, under the ages of 40 and 30 respectively, expressed broad satisfaction with the way their country has developed in the past 10 years. At last, the Russian leadership has managed to tame the volatilities of the 1990s, they say, and the economy is now more secure than ever in recent history. This is evidenced, among other things, by the country’s rising standards of living and its soaring domestic consumption.

Nevertheless, some hold that the pendulum of government intervention in the economy has swung too far. While a strong political centre may have helped the country recover from its post-Soviet woes by providing much-needed stability, Russia’s particular brand of state capitalism may now be reaching a point of declining marginal returns. So while Russia is the richest of all BRICS, its psychological risk premium may also be the highest, limiting an otherwise limitless foreign investment appetite. 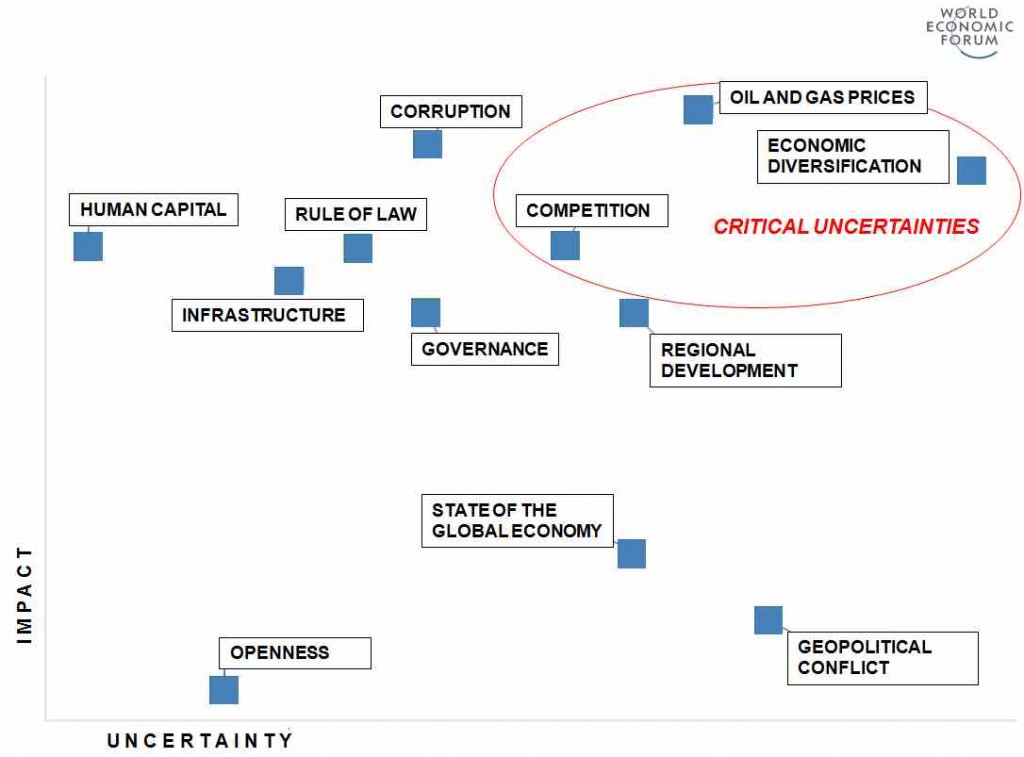 Ranking the importance of different drivers for Russia’s economic development

Ranking the importance of different drivers for Russia’s economic development in terms of impact and uncertainty over the way in which they may evolve over time, the group highlighted oil and gas prices as well as economic diversification and competition as critical uncertainties (see exhibit). Going forward, it is the intriguing and sometimes counterintuitive relationships between these and other uncertainties that the Scenarios for the Russian Federation will explore in further detail. Through this process, it will suggest new perspectives on alternative pathways for the future of the Russian economy.