What if security as we know it breaks down?

Sania Nishtar on why interconnected crises could spell the end of conventional security. The interview is part of the Risk Response Network’s “What if?” series.

What is your main field of expertise and current research?
My main area of work is health policy and systems analysis and research, and surrounding areas of governance. So, while the key focus is on health, there are many aspects of health systems that cross-cut governance, which is why I am interested in broader issues of governance as they impact health and related social sector processes.

Given your research, what would you say is the most under-appreciated risk?
It’s not one risk, I would say it’s rather a constellation of interconnected risks. The world has, for a very long time, appreciated conventional security and has aligned its priorities accordingly. But the state of human security risk is not well appreciated and, in the past five years or so, the impact of the lack of attention to this area is becoming increasingly apparent.

We have the economic meltdown; there are a number of food crises emerging. There are issues of water security and energy security that feature very prominently in many developing countries, tying into the issue of health security, with burgeoning rates of emerging and re-emerging infections. In certain parts of the world, demographic security has become a challenge. So, this constellation of human security issues is a risk that the planet faces and, of course, environmental security is a major part of that.

How would you frame this risk as a hypothetical scenario: “what if” this was to actually happen?
You can take the global economic downturn as a key example. If things are not stabilized and if the debt burden deepens further, there will be massive job cuts; governments will not have the fiscal space for investment in the social sector; people will be pushed into poverty; crime and violence will increase, and that will further worsen the law and order situation, which will have a negative impact on the economy; and governments will not focus their attention on health, education and the environment. It really could get out of hand.

Who will feel the impact the most?
Those who have the least resilience: the poor and the marginalized who will bear the brunt.

How well do you think the world’s leadership and institutions are prepared to respond?
They are responding to this unfolding situation by addressing its manifestations, but not so much by addressing the core determinants. You need stronger institutions, careful attention to conflicts of interests, policies that safeguard and uphold equities, and all this is not being put in place. You require transparency and regulation, and that is not happening either. Unfortunately, in many parts of the world, we’re just focusing on the manifestations.

How dire is the current situation?
There are many pointers indicating that things are deteriorating at a faster pace than we thought they could. The debt situation in America, the similar situation in many countries of Western Europe – these are the determinants. They have a huge negative knock-on effect because of the globally interconnected world. And for things to be reversing so swiftly after the initial pick-up of the economy that we saw following the global financial crisis is a very ominous sign.

What is your top mitigation approach for this risk?
Well, I think [leaders] need to get down to cutting redundant costs. They need to get down to tightening the belt. They have to be very clear about transparency and regulation. They need to plug the channels of corruption, plug the pilfering and leakages from the system, provide industry with a level playing field, foster better competitiveness, have institutions that are more responsive and transparent, and move towards a fairer role for governments and oversight. All these have a long list of follow-up actions.

On the flip side of this risk scenario, what are the opportunities?
I think there are opportunities because, perhaps for the first time, the world is appreciating that if you are not going to embrace the values enshrined in equity, solidarity, fairness, transparency, participation, openness, respect for other sovereign nations, respect for culture and religions – if you are not going to embrace cross-cultural and cross-religious harmony – there are dire consequences.

The most important opportunity emerging from this is a realization that business as usual is not an option any more. There are costs associated with business as usual that are unacceptable even to the wealthiest countries and they take a toll, with implications for everyone. Since the Second World War, we have not seen such a consolidated negative impact of the policies that many countries have been pursuing.

And I think there are other opportunities as well, because we see that businesses are moving towards a paradigm where they are finding different attributes to profit. We have businesses talking about social responsibility, about a greener imprint, and about a commitment to well-being, and I think that the World Economic Forum is playing a very proactive role in bringing these attributes to centre stage.

So, there is another opportunity here related to the openness that there is within the private sector towards these attributes, and the possibility of bridging the public-private divide to work towards a common good together.

What role would you say technology could play?
Well, I think technology has a huge potential because technology is a cross-cutting enabler. It reduces errors, it maximizes efficiency and effectiveness, it can eliminate abuse from the system, and it can help improve targeting. It is really an enabler in ways that we cannot even appreciate.

Pictured: A man walks past motorbikes set ablaze by an angry mob in Karachi (Reuters) 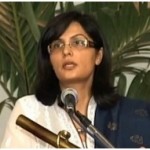 Sania Nishtar is the Founding President of Heartfile, Pakistan and a member of the World Economic Forum’s Global Agenda Council on Health and Well-being