What if the American middle class loses hope?

Raghuram Rajan on how political divisions and a changing labour market are threatening the American dream. The interview is part of the Risk Response Network’s “What if?” series.

What is your main field of expertise and current research?
I am a financial economist and do research in the areas of banking, corporate finance, international finance and financial institutions. I also do work on international governance. Of course, an economist today has to opine on many things outside their specific area of expertise.

Given your research, what would you say is the most under-appreciated risk?
I would say it is the challenge posed by technology and integration to the availability of middle class jobs. That’s a long-winded way of saying that, to some extent, I think that the [financial] crisis was in some ways driven by the fact that in industrial countries, especially in the United States, the traditional jobs of the middle class were getting displaced by a combination of technology and global integration.

That, I think, is something that the crisis itself has not given us enough time to reflect on. To my mind, the kind of social and political problems that it generates are producing outcomes that, unless we do something about it, will only get worse.

The answer, in my opinion, is that we have to find ways to improve the skills of the population, who are falling behind, and also find ways of incentivizing job creation in the areas where skills lie. This means there is movement on both sides: on the demand side, in the demand for the kind of skills that exist, and, perhaps more importantly, in the realignment of skills towards the jobs that are being created [on the supply side]. Otherwise, we will have growing economic inequality and all the ills that that brings; if you think that we are in a bad political situation now, you ain’t seen nothing yet.

How would you frame this risk as a hypothetical scenario: “what if” this was to actually happen?
What if a disillusioned American middle class, especially the lower middle class, sees fewer and fewer opportunities? They push their representatives to do something – to do anything. One demonstration of what is done is an attempt to increase taxation and redistribution in the US, which is met by an opposing force, those working for the better off. And so, there is political conflict; that’s one level.

None of this does that much for the people falling behind, so frustration manifests itself in much higher levels of crime, flash mobs and social break down and, no matter how brutal the police are, it doesn’t stop the cycle – there is a limit to how much brutality a civilized society can enforce – and so, there is essentially a breakout. This leads to a rise of nationalistic parties, populist parties, etc.

That’s a scenario that I think is still a low probability; the American people are very patient. The bleakness over the past 10 years was in a way removed by rising house prices and the rising stock market in the sense that things were getting better. Of course, all that was interrupted by the crisis and now, without jobs, with huge amounts of debt and with nothing to look forward to, bleakness would convert into impatience and eventually action.

Is this risk restricted to America or are you seeing the same threat in other industrialized nations – Britain, for example?
Well, I think it’s more broad. It’s not just the overall growth picture; it’s where the jobs are and who gets the jobs. The middle class is an extremely powerful force for social democratic societies and, to the extent that it’s angered, to the extent it is weakened, the kinds of things that free enterprise democratic societies depend on, the institutions that they rely on, those tend to get weakened. And when those institutions weaken, there is the potential for movements to fill the gap, movements that pander to the worst instincts of the middle classes rather than to the best instincts.

Specifically in the US, some would argue that President Obama’s authority has been eroded by the debt crisis. Would you see that as an example of an institution being weakened?
I would say that applies to Washington in general. It’s not just the presidency, but Congress, which actually has a significantly lower reputation now, according to the latest polls, than the presidency.

It seems to me that, in a sense, the gridlock in Washington reflects the gridlock or the division among the American people, and this is where inequality is particularly pernicious. When you don’t find jobs, you don’t see that you have a fair deal, you think the system is flawed and you want the system to change.

And so this has become a polarized debate, partly because society is polarized. So, when people say the [debt] deal could have been done in Washington much more easily and “you should have all been grownups and stood across the table and worked out a compromise”, well, the American people are so divided that they wouldn’t have stood for compromise individually. Yes, collectively they’ll blame Washington and say “you should have compromised”, but if compromise means giving away something from their cherished agenda, they won’t stand for it.

So, I think what is really needed is for the divisions in the population to quiet down a little and for the middle to assert itself more, and that may take an election. And even after the election, all we may see is a reassertion of division.

To some extent, politicians are as good as the electorate allows them to be. I don’t think we’ve suddenly got a set of pygmies leading us in Europe and the US. I think the problems are enormous, the political room to deal with them is much more limited and, as a result, even good leaders – and I don’t think the current batch is any worse or any better than the past batches – seem shrunken in stature.

Europe, I think, has, over and above the economic problems, a real problem of the elite support for European integration. It’s far stronger than the popular support for European integration, and the elite have carved out a situation where it’s really hard to backtrack from where they are. But they are so far out on a limb relative to where the population is that, every time they go back to the people and say “do you support what we just did?”, the people say “no”. That’s what [German Chancellor] Angela Merkel is seeing at every election.

Pictured: A boarded up house between two occupied homes in a Detroit neighbourhood (Reuters) 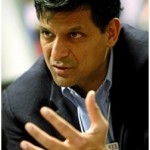 Raghuram Rajan is the Eric J. Gleacher Distinguished Service Professor of Finance at the University of Chicago Booth School of Business, and a member of the Global Agenda Council on Fiscal Crises.