What if global institutions fail?

Douglas Rediker on how a smouldering financial crisis could push existing power structures beyond their limits. The interview is part of the Risk Response Network’s “What if?” series.

What is your main field of expertise and current research?
I focus on international finance, international institutions, capital markets and the broad strategic and foreign policy implications of finance and economics.

These are market crises and they are moving at a totally different speed than that at which global, consensus-driven organizations can operate.  It is a real concern. There is a real disconnect between the necessity for fast, efficient, bold, coordinated global action and the otherwise slow, deliberative, cautious, least common denominator, consensus-driven approach of global institutions in their response.

This disconnect could lead to paralysis, a failure to act effectively or the bypassing of these institutions as the means used to address the problem.

How would you frame this risk as a hypothetical scenario: “what if” this was actually to happen?
The real “what if?” scenario that we need to worry about is what happens if there is a real crisis – financial, environmental or other – and global institutions are simply unable to act, or react, in a timely manner. This would then leave responses to either individual nations or ad hoc or regional alliances. And what if those ad hoc, regional and national responses are inconsistent?  This could lead to rising conflict rather than coordinated global responses.

I think we’re already seeing an evolving rise in the “rest” of the world, where the dominance of the European and American liberal democratic-oriented global institutions is being questioned. If you take a look at China, which is clearly the world’s fastest growing economy, a rising superpower, we can clearly see that it has one foot in the existing global system, but it remains somewhat wary of jumping in with both feet.

It is not surprising for China to be “hedging” itself. It can continue to develop bilateral and regional alliances on its own terms, while also seeking a growing but still somewhat muted influence on the international stage in the international institutional framework that was established before its dramatic rise began.

The world has changed in the last 20-30 years, evolving from bipolar, where it was US-Soviet Union, to uni-polar, where it was dominated by the US. Are we now entering a period we might call multi-polar or even “non-polar”?  That is, are we potentially evolving to a world in which we rely more and more on consensus-driven global institutions to address cross-border problems that may arise within financial, climate or border disputes, rather than being guided by one or more countries serving as global leaders?

But what is the result if these institutions aren’t up to the task? This scenario is not necessarily hypothetical; we need only look at the case of military action in Libya, where we saw leadership taken not by the UN or any other global institution, but by the Arab League and then by France, the UK and the US. None of the action was undertaken through traditional global institutions or alliances.

In your analysis, how might this scenario unfold?
I think the world’s economic and financial crisis will continue to smoulder.  If you assume that fudges and compromises are, at some point, no longer adequate, then real, hard decisions and real, firm commitments of capital and sacrifice are required and existing institutions may simply be unable or unwilling to step in.

Today, global institutions have insufficient resources to address problems on a catastrophic scale and it’s really beyond any one institution’s mandate to solve the world’s financial problems in one fell swoop. Many people look to the G20, but that is a cumbersome group with no independent resources, financial or human, and it requires absolute unanimity to make any pronouncements. That means it’s very difficult to announce firm, bold measures.

The risk is if individual countries and/or regions undertake responses to a financial crisis that are inconsistent with one another and also the greater good.  These could include capital controls, trade barriers, beggar-thy-neighbour policies, all the sorts of things that global institutions are supposed to be there to prevent. Such uncoordinated national or regional responses to very systemic global problems, in the face of failing global institutions, run the risk of escalating global and regional conflicts, reviving old animosities and potentially making the economic impact of the crisis that much worse.

Who would feel the impact the most and how?
Well, the problem with this scenario is that everyone is impacted. If the crisis begins in Europe then the most direct impact would be in Europe itself, but there is no denying that everyone from China to the US has very deep trading and economic ties to Europe. Most economists believe that a major financial crisis in one part of the world, for example Europe, would result in global growth slowing considerably elsewhere.

Banking and trade could be hit. Commodity producing countries, used to running huge surpluses, could find that slow growth means lower demand for commodities which means lower prices, leading to domestic and budgetary problems at home.

While everyone will be impacted, those affected most acutely could the weakest and the poorest, which is exactly what the global system is intended to prevent.

How well do you think we’re prepared for such a contingency?
I think existing global institutions are inadequately prepared to take bold pre-emptive action without unanimous support – and there is a real disconnect between the two.

Ironically, I think that the contingency plans that might be most necessary are often not available for crises that are increasingly possible. The very act of planning for a specific contingency can be seen as potentially precipitating that very event. Therefore, many institutions don’t fully explore contingency plans and scenario playing, but remain reactive and wedded to existing paths, as they are paths of least resistance.

What is your top mitigation approach for this risk?
The solution that I would see as a means to address the potential inability of global institutions to act involves going against the grain of much of what we have seen over the past 30 or 40 years, in terms of giving a greater voice to every single country, large and small, in global institutions.

What may be needed is a smaller group of the world’s leading countries that meets, in addition to existing institutions, to ensure that in times of crisis those countries with the greatest resources necessary to be brought to bear are actually able to take decisions collectively.

A suggested mitigation approach for this risk is to have a reconstituted G5, 6 or 7, this time with some staff and a regular meeting schedule.  This should not be structured on the basis of historical, post-World War II power dynamics, but rather in a way that reflects the current dynamics of the world’s economic and global power shifts. That probably means reflecting a shift away from Europe towards the Pacific as well as other difficult shifts. I say difficult, because deciding who is in and who is out of this group is perhaps the most difficult dynamic one could imagine. The US is in. China is in, and so is Japan. But what about Europe? Is it one representative, and if so, then who?  We can already imagine how that might play out. Is the UK part of Europe or not?  What about Brazil, India? It’s an almost impossible situation, but this is a “what if?” scenario, so I am giving a “what if?” answer.

On the flip side of this risk, what opportunities do you see associated with this scenario?
We have the opportunity to put in place a real crisis Risk Response Network in which major actors sit around the table.

This need not be conducted in the public space. The fears of the world should not be set alight by saying that leading countries are together planning for every worst case scenario, but a platform is needed in which country representatives could meet privately to ensure that scenario playing and contingency planning is taking place at the right level and that there are agreed upon responses and no unnecessary surprises.

The risk of the rise of inefficient and conflicting regional and national responses to potential crisis threatens the very liberal democratic values that we’ve grown to embrace on a global institutional scale. Ironically, and I know it is impolitic to say, but a slightly less transparent model might lead to greater harmonization of responses to global crises and ultimately preserve those very liberal democratic values in the long run. 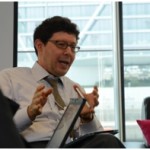