Did the euro kill governance in the periphery?

The conventional wisdom before the creation of the euro was that the monetary union would force its least productive members to undertake the structural reforms needed to modernise their economies. In the past, the peripheral European countries had used devaluations to recover from adverse business-cycle shocks, but without correcting the underlying imbalances of their economies. The euro was expected to eliminate the bias of their monetary policy toward inflation, force sound fiscal policy and encourage widespread liberalisation.

By the end of the 1990s, under the incentive of Eurozone-entry, most peripheral European countries were busy undertaking structural reforms and putting their fiscal houses in order. However, the arrival of the euro, and the subsequent interest-rate convergence (see Figure 1), loosened a tide of cheap money that reversed the incentives for further reforms. As a result, by the end of the euro’s first decade, the institutions and governance in the Eurozone periphery were in worse shape than they were at the start of the decade. The credit bubbles unleashed by the euro not only undermined competitiveness and increased indebtedness, but they also undermined the institutional basis of these economies. 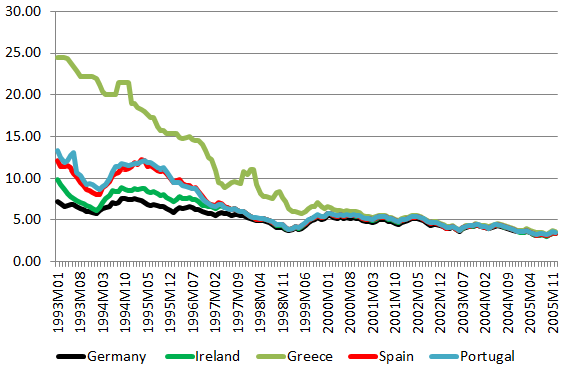 There were two main channels through which these large inflows of capital led to the abandonment of economic reforms. First, they relaxed the constraints under which agents were acting, thus reducing the pressure for reforms. Second, they made it harder for principals in both the public and private sectors to extract signals about who was performing well or poorly. When banks are delivering great profits, all managers look competent; when countries are delivering the public goods demanded by voters, all governments look efficient. As a consequence, bad agents were not fired, incompetent managers kept their jobs and inefficient governments were re-elected. The efforts to reform key institutions that burden long-run growth, such as rigid labour markets, monopolised product markets, failed educational systems, or hugely distortionary tax systems plagued by tax evasion, were abandoned and often revoked.

In Fernández-Villaverde, Garicano and Santos (2013) we examine this mechanism, develop a framework to understand it and apply it to the experience of Spain, Ireland, Greece and Portugal. We then argue that the same circumstances that allowed delays in the periphery actually forced reform on a reluctant Germany.

In Spain, the years before the euro were auspicious for reform. In particular, Spain’s fiscal position was consolidated and several strong multinationals appeared as a result of a wave of privatisations. But Spain’s real-estate bubble turned the clock backward. Meagre attempts at reforming the malfunctioning labour market in 2002 were not completed, the educational system suffered an increase in the dropout rate, and local governments and a large segment of the financial system were infected by the pervasive corruption engendered by the real estate boom.

Similarly, Ireland had introduced important economic-policy reforms since the second half of the 1980s, including labour-market reforms, and had liberalised strategic sectors of the economy such as air transport and the telecommunication system. These reforms helped to deliver real annual output growth that averaged more than 6% from 1987 to 2000. However, as real interest rates dropped, Ireland became the country with the highest share of housing investment in gross capital formation in the EU. Rather than seeking to counterbalance the bubble, governmental policy accentuated it through regulatory and tax changes – such as reductions in stamp duties or increases in the ceiling on income-tax deductibility of mortgage interest – that made real-estate development even more attractive. Moreover, several major legislative changes worsened financial supervision. Probably not unrelatedly, from 1997 to 2007, 49% of disclosed donations to Fianna Fáil – the party in government- were from property developers and the construction industry (Byrne 2012). Thus, Ireland, instead of transitioning toward a lower, more sustainable rate of growth based on productivity gains, went from growth based on increases in the employment ratio to a speculative cycle.

Greece is the poster child for postponed adjustment. Greece’s curse, more than any of the other peripheral countries, was an unreformed economy. Although the examples of arrested reforms are many, one of the clearest is the pension system, where reform has been considered imminent at least since 1990 as the system faced both a dramatically rising dependency ratio and an overly generous replacement ratio (OECD 2009). Furthermore, the system was extremely fragmented, with 236 separate funds in 2003 (O’Donnell and Tinios 2003) that caused inefficiencies and duplications and yet left many pensioners at risk of poverty. There had been sporadic attempts at reforming this defective system. Some changes had taken place in 1992 when the budget was under serious strain, but they did not tackle the long-term imbalances. The year 2001 saw the defeat of a reform package of the pension system that had first been proposed in 1958 and was already considered extremely urgent (Borsh-Supan and Tinios 2001). A new reform package, characterised by creative accounting and little real reform, sailed through parliament in 2002. The government of Greece had been under some pressure during the negotiations about joining the Eurozone. But once Greece had entered the Eurozone, the pressure was off, pension and other economic reforms were abandoned and not taken up again until Greece was already in the midst of the worst of the economic crisis.

Finally, after 15 years of economic growth that followed its accession to the EU, Portugal’s economy stagnated around 2000. Shockingly, in 2012, Portugal’s output was lower than in 2001. The headline government budget deficit never fell below 2.9% of GDP and the primary balance was constantly in deficit, even after controlling for the effects of the business cycle and one-off and temporary adjustments (Marinheiro 2006, updated 2011). The parade of deficits led public debt to accumulate from 51.2% of output in 2001 to 92.4% in 2010. The private sector responded to the stagnant economic outlook by reducing its saving rate and heavily borrowing from abroad to finance current consumption, while investment fell as a percentage of national demand. In short, the behaviour of both the public and the private sector was unsustainable in the medium run. However, accession to the euro allowed both the public and the private sector to postpone the day of reckoning by taking advantage of the historically low interest rates. For example, while government debt as a share of GDP rose by 41 percentage points, interest paid on the debt barely budged; it was 2.9% of GDP in 2000 and 3% of GDP in 2010. Thus, the euro allowed Portugal’s political-economic equilibrium to be sustained in the medium run by the large capital inflows from the rest of the world, even if a correction was eventually unavoidable.

On the other hand, in the years after the introduction of the euro, Germany undertook painful reforms of its welfare state and labour market (particularly those known as Hartz IV). Germany’s poor economic performance in the late 1990s, the accumulated costs of reunification and the adverse demographic trends had placed the welfare system under severe strain. Why did the euro not have the same effect in Germany as in the peripheral countries like Spain, Ireland, Greece and Portugal – namely, to postpone reforms? In our view, and consistent with our hypothesis, the answer lies in the paths of interest rates shown in Figure 1. For Germany, the euro meant tighter budgetary and fiscal constraints but not looser financial conditions. Absent the leeway provided by a financial boom, politicians had no choice but to act.

In summary, while observers had expected the arrival of the euro to lead to a modernisation of the peripheral European economies, the steep financial boom derived from the drop in exchange-rate risk and from the Eurozone-wide financial bubble meant that the budget constraints that these countries faced were loosened, rather than tightened. Countries that could cheaply borrow delayed painful reforms. Moreover, accountability was lost during the bubble as bad decisions had no negative short-run consequences, since rising asset prices hid all mistakes.

Our work suggests several avenues for future research. First, while case studies are ideal for providing a careful analysis of the mechanisms at play, a more systematic empirical analysis of public and private governance in bubbles is necessary to test our theory. Second, as our work is currently in progress, our hypothesis on signal extraction in bubbles needs to be formalised. Third, our theory suggests that there may be differences between how damaging private and public bubbles are. Private bubbles appear to be more damaging, since they not only affect the sustainability of public finances but also damage governance in the private sector. A final issue concerns the broader applicability of our analysis. Are all situations in which financing is plentiful and cheap conducive to the deterioration of governance and the abandonment of economic reforms? If so, this situation is currently the one the US, at the zero lower bound, is facing, in which case our analysis suggests that a similar deterioration of public and private governance may occur.