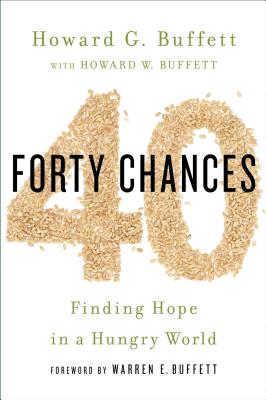 In 2006, Warren Buffett asked his children this question: if you had 1 billion dollars to do something important with, what would you choose? For anyone else, this question would have been hypothetical; for his elder son, it was an opportunity to follow his passion for farming to improve food security for the world’s hungriest people.

Howard G. Buffett is a first generation farmer. He learned his trade by working the land, and by studying the techniques of those around him. His curiosity, intelligence and energy have resulted in a passion for soil, and for the farming techniques which enhance and protect it.

His book, 40 Chances: Finding Hope in a Hungry World, combines his experiences on the land as a farmer and as President of the Howard G. Buffett Foundation and turns this into an intelligent and thought-provoking review of 40 separate hands-on experiences.

He provides both pragmatic examples of successful charitable endeavours, as well as cautionary tales from well-meaning failures. This creates a valuable resource for anyone interested in effective giving.

The 40 chances from the book’s title refer to the average number of seasons a working farmer will need to learn how to perfect their crop. Buffett applies this mindset to his philanthropy. “To make the most of your forty chances, from time to time you’ve got to do things you don’t necessarily know how to do, make some mistakes, call an audible, and try again. It’s a simple concept, but so many people are afraid of change.”

His focus is on the impact and importance of agriculture – not only to feed the starving, but also to promote peace and stability. Buffett is a talented photographer, with a compassionate eye for the human story. His photos illustrate his experiences of charitable collaboration in over 80 countries, with people as diverse as the singer Shakira and child soldiers in Sierra Leone.

The famous Buffett family pragmatism informs Howard’s advice which is frequently specific and actionable. He discusses the importance of matching crops and seeds to soil and climate, cultural considerations, and donations that will have a positive impact on local workers.

He also gives examples of large-scale efforts such as a programme which buys commodities from smallholder farmers in order to lift a region’s economic base, at the same time getting food to people who need it.

He meets and invokes some of the great names of contemporary philanthropy, but the heart of the book is with the front-line workers who are striving to make the world a better place.

Ultimately, his message is about the importance of building independence for farmers and sustainability in agriculture as a mechanism for creating social stability. While he shies away from any label that might identify him as a “greenie,” he can’t hide his love of Mother Earth as he exhorts us all to be active and involved in the mechanisms that support life.

“All of us make mistakes because of youth or ignorance or both. We can’t do much about youth, but we can do something about ignorance.”

India is battling its worst desert locust outbreak for decades and is using a helicopter and 12 drones to spread insecticide to battle the swarm.