Will our cities survive the storms of the future?

Tacloban in the Philippines has now joined the growing list of cities – including New Orleans, Bangkok, Moscow, New York, Beijing, Rio de Janeiro, and Port-au-Prince, to name just a few – pummeled in recent years by climate catastrophes. Yet many of the world’s largest cities, built on seacoasts and rivers, face the threat of rising sea levels and intensifying storms.

The importance of cities in today’s world economy is unprecedented. Until the Industrial Revolution, human history was overwhelmingly rural. Only around 10% of people lived in cities. Today, the share of urbanites is around 53% and is likely to rise to around 67% by 2050.

Because per capita incomes are higher in cities than in rural areas, the world’s cities today are estimated to account for more than 80% of global income, with the largest 600 accounting for around half. Most of the new jobs over the next few decades will be created in cities, offering livelihoods to hundreds of millions of young people and, as China and Brazil have demonstrated, helping to slash extreme poverty.

Cities are also the innovation hubs for public policy. Every day, mayors are called on to get the job done for residents. They are the ones responsible for providing safe water, garbage collection, safe housing, infrastructure, upgraded slums, protection from disasters, and emergency services when catastrophes hit. So it is not surprising that while national governments often are paralyzed by partisan politics, city governments foster action and innovation.

Economic prosperity speaks for itself. Social inclusion means that all members of society – rich and poor, men and women, majority and minority groups – should have equal rights and equal opportunities to benefit from rising prosperity. And environmental sustainability means that we must reorient our economies and technologies to provide basic services like safe water and sanitation, combat human-induced climate change, and protect biodiversity. Achieving these three goals will require good governance, public finance, and effective institutions.

Cities will be in the front lines of the battle for sustainable development. Not only do they face direct threats; they also have the best opportunities to identify and deliver solutions. As high-density, high-productivity settlements, cities can provide greater access to services of all kinds – including energy, water, health, education, finance, media, transport, recycling, and research – than can most rural areas. The great challenge for cities is to provide this access inclusively and sustainably.

A significant part of the solution will come through advanced technologies, including information systems and materials science. The information and communications revolution has spawned the idea of the “smart city,” which places the relevant technologies at the heart of systems that collect and respond to information: smart power grids, smart transport networks (potentially including self-driving vehicles), and smart buildings and zoning.

The advances in materials science open the possibility of much more energy-efficient residences and commercial buildings. Cities also give rise to the opportunity to combine public utilities, as when urban power plants use the steam released in electricity generation to provide hot water and heating to residents.

Yet technology will be only part of the story. Cities need to upgrade their governance, to allow for a greater role for poorer and more marginalized communities, and to enable much more effective coordination across city lines when a metropolitan area is home to many individual cities. Metropolitan governance is therefore crucial, as smart cities require networks that operate at the metropolitan scale.

A wise political doctrine known as subsidiarity holds that public-policy challenges should be assigned to the lowest level of government able to address them, thereby ensuring maximum democratic participation in problem solving and the greatest opportunity to tailor solutions to genuine local needs. While some issues – for example, a national highway or rail system – require national-level problem solving, many key challenges of sustainable development are best confronted at the urban level.

The world’s governments are now negotiating the Sustainable Development Goals, which will guide the world’s development agenda from 2015 to 2030. In an important meeting on September 25, the United Nations General Assembly agreed that the SDGs would be adopted at a global summit in September 2015, with the next two years used to select the priorities.

An urban SDG, promoting inclusive, productive, and resilient cities, would greatly empower tens of thousands of cities worldwide to take up the cause of sustainable development for their own citizens, their countries, and the world. 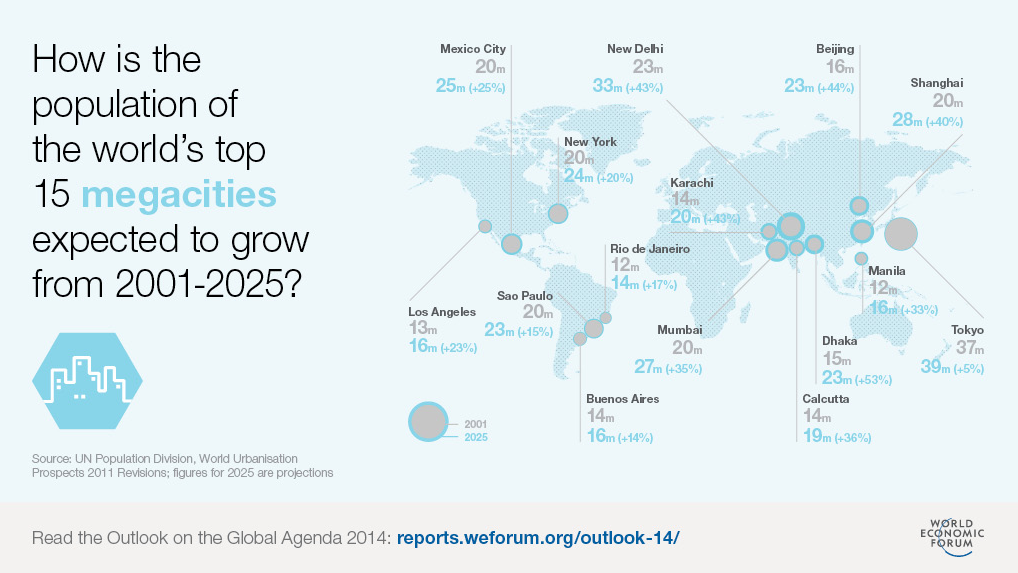 Author: Jeffrey D. Sachs, Professor of Sustainable Development, Professor of Health Policy and Management, and Director of the Earth Institute at Columbia University.

Image: Bolts of lightning are seen in a highway in Las Vegas REUTERS/Ethan Miller.