Why Japan needs women for its new dawn

For years, pundits called Japan the land of the setting sun. They said that for an economy as mature as Japan’s, growth would be impossible. They said that our public debt was unsustainable. They pointed to our supposed psyche of resignation as a symptom of relative decline.

But now such voices are rarely heard. Japan’s economy has swung from negative to positive growth and is on the verge of breaking free from chronic deflation. This spring, wages will increase – a long overdue development that will lead to greater consumption. Our fiscal position has also improved steadily, with my government on track to consolidate public finances.

And, as the economy has turned around, Japan’s people have become more vibrant and upbeat – a mood reflected in public enthusiasm over the choice of Tokyo to host the 2020 Olympic and Paralympic Games.

So it is not twilight, but a new dawn, that is breaking over Japan. And that is because we have overcome the notion that certain reforms could never be carried out. I have maintained that I am willing to act like a drill bit, strong enough to break through the solid rock of vested interests. And so we have.

For example, we will completely liberalize Japan’s electricity market. By the time the Olympians arrive in six years, the power sector will be fully competitive, with electricity generation separated from distribution.

We will also foster medical care as an industry. Japan is on the forefront of regenerative medicine, and we will make it possible to generate stem cells at private-sector labs. And I have just proposed additional reforms, because we also need large-scale health-care providers in the form of holding companies, much like America’s Mayo Clinic.

Moreover, we are eliminating the “rice production adjustment” system, which has been in place for more than 40 years. Barriers to private companies’ entry into the agricultural sector will be removed, and farmers will be allowed to grow the crops they want, without official control over supply and demand.

Soon, our deregulation package will be set in motion. Over the next two years, in designated areas, no vested interests will remain impervious. For example, in Japanese cities aspiring to world-class status, limits on floor space will become a thing of the past. We will soon see high-quality housing, business complexes, and zero-emissions towns appearing, one after another.

Likewise, the Trans-Pacific Partnership (TPP) will remain a central pillar of my economic policies, and we will press ahead with the Japan-European Union Economic Partnership Agreement. As a result, Japan’s economy will become even more deeply integrated into global flows of knowledge, trade, and investment. Companies and people from abroad will find Japan among the most business-friendly places in the world.

Japan’s management of public funds – such as the Government Pension Investment Fund, which now holds about $1.2 trillion – will also undergo far-reaching change. We will press ahead with reforms, including a review of the GPIF’s portfolio, to ensure that public funds contribute to growth-nurturing investments.

We must also make our corporate taxes internationally competitive. In April, the tax rate on companies will fall by 2.4 percentage points. And we will put in place tax incentives aimed at encouraging companies to use their cash for capital investment, research and investment, and wage increases.

At the same time, we will reform labor-market rules that tie workers to old industries. New industries require innovative and creative human resources, and we will redirect our subsidies so that workers without meaningful employment in declining industries can move on and find rewarding work in rising sectors.

Of course, given that Japan’s population is rapidly aging, and the number of children is falling, investors find themselves asking an obvious question: “Where will Japan find the innovative and creative human resources that it needs?”

Arianna Huffington once quipped that if Lehman Brothers had been “Lehman Brothers and Sisters,” the firm would have survived. Japan’s corporate culture is even more male-dominated – a world of pinstripes and button-downs.

I was greatly encouraged when Hillary Clinton told me that Japan’s GDP could be 16% larger if women participated in the labor market at the same rate as men. Indeed, Japan’s female labor force is the economy’s most underused resource. 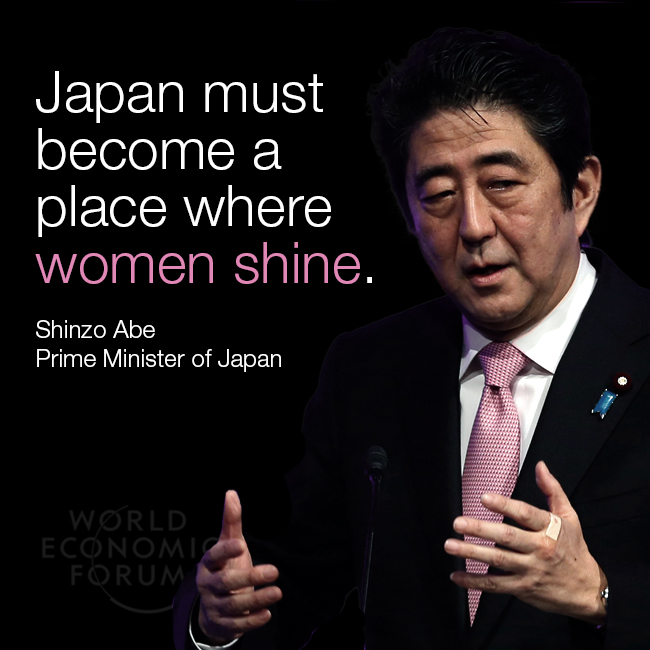 Japan must become a place where women shine. By 2020, we want women to occupy 30% of leading management positions – a goal that presupposes a more flexible working environment, as well as support from foreign workers to take over domestic and personal services.

A major impetus for change will come in the form of legal reforms, to be introduced at the next parliamentary session, that will increase the number of external directors on corporate boards. Next month, we will also propose a stewardship code that will enable institutional investors to play a greater role in corporate governance.

I am confident that the combined effect of these reforms will enable Japan to double its inward direct investment by 2020, rebooting the entire country and changing its economic landscape dramatically.

But there is still much to do. Soon, three years will have passed since the catastrophic earthquake and tsunami struck northeastern Japan on March 11, 2011, causing the failure of the Fukushima Daiichi nuclear power plant. While the recovery is far from complete, the love and compassion reflected in the world’s response touched us deeply, as has the survivors’ spirit of perseverance and mutual aid to overcome hardship.

It is in the same spirit that Japan is now set to contribute even more positively to world peace and development. In our age, no single country can preserve peace by itself. None of us alone can solve the challenges that the world faces without helping one another.

In Cambodia, for example, a Japanese-built hospital for mothers and newborns has helped to reduce the country’s infant-mortality rate. In the Philippines, Japan’s Self-Defense Forces mounted a major relief effort after the devastating typhoon in November. And our servicemen and women based in Djibouti remain on high alert against piracy, protecting ships from around the world.

Japan is surrounded by neighbors with unlimited possibilities: China, South Korea, the ASEAN countries, India, Russia, and, across the Pacific Rim, the TPP partner countries. Indeed, with Asia becoming the engine driving the world economy, the need to achieve lasting peace and prosperity has never been greater, because the global knock-on effect of any threat to regional stability would be enormous.

The foundation underpinning prosperity is freedom of movement for people and goods. On sea-lanes, in air space, and now in outer space and cyber space, freedom of movement must remain secure. The only way to maintain these indispensable public goods is by rigorously upholding the rule of law and promoting fundamental values like freedom, human rights, and democracy.

There is no alternative. Asia’s growth dividend must not be wasted on military expansion. We must use it to invest in innovation and human capital, which will further boost growth in the region. As is true elsewhere, trust among Asian countries is crucial for their peace and prosperity, and this can be achieved only through dialogue and adherence to international law, not through force or intimidation.

In order to create a region of trust and order, I would like to appeal to Asia and the world. To prevent unchecked military expansion in Asia, defense budgets should be made completely transparent, with verifiable public disclosure. Moreover, Asian governments should create a mechanism for crisis management and strong communication channels among our armed forces. We must also establish rules that promote behavior based on international maritime law.

Only then can we achieve lasting growth and prosperity in Asia, enabling all of us in the region to realize our great potential.

Japan has pledged that it will never again wage war, and we have never stopped working for a world that is at peace. It is my fervent hope that Japan’s economic revival, with its promise of increased global and regional prosperity, will help to bring such a world closer.

Author: Shinzo Abe is Prime Minister of Japan. He is participating in the World Economic Forum’s Annual Meeting 2014 in Davos-Klosters, Switzerland. Watch his Special Address in full here.