Oxfam’s recent estimate that 85 multibillionaires have accumulated fortunes greater than the wealth of the world’s poorest 3.5 billion people implies an uncomfortable situation for governments worldwide: economic disparity is worse today than at any other point in history.

Considering the overall condition of our world economy, this seems surprising. According to nearly every indicator, the income gap between each country on the planet is shrinking, as dynamic markets in Asia, Africa and Latin America begin to catch up (and even surpass) those of Europe and North America. But within societies, the difference between the richest and poorest has never been more apparent.

On the Gini coefficient, 0 represents a state of perfect economic equality, and 1 represents total inequality. The United Nations rates coefficients greater than 0.4 to be indicative of dangerous levels of inequality.

According to the most recent data available from the World Bank, nine G20 economies (Argentina, Brazil, China, Mexico, Russia, South Africa, Turkey and the United States) have already passed the 0.4 threshold, implying dangerous levels of inequality. Of the remaining major economies, only Japan and Germany have coefficients of less than 0.3 (no data is available for Saudi Arabia). 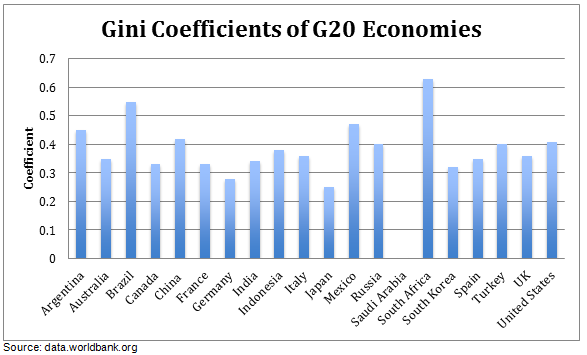 Beyond the G20, the World Bank lists 29 economies in sub-Saharan Africa with coefficients above 0.4, as well as 19 in Latin America, five in East Asia and five in the Caribbean.

Where crossing the 0.4 threshold once represented a state of gross inequality, it is now the status quo for much of the world. Left uncorrected, disparity at this level can have serious, negative consequences.

Social unrest of the type that we are seeing in Brazil is directly linked to the extra financial burden placed on taxpayers from the building of stadiums, hotels and associated infrastructure for the 2014 World Cup. Following months of dissent, last summer’s 50-cent bus fare hike in Rio de Janeiro ignited a series of violent protests that have continued into this year.

A Jana poll run in February 2014 offered some insight into the public mood. As a poll of Brazil’s middle-class mobile Internet users, it should represent the opinions of those enjoying the benefits of Brazil’s growing economic might. However, the feedback that we took from our panel painted an overwhelmingly negative picture.

Among respondents, 93% recognize economic disparity as a serious problem in Brazil. Furthermore, 77% believe Brazil’s tax system is unjust; and 67% believe to some degree that the economic system in Brazil favours the wealthy.

This situation is not unique to Brazil. The same poll of similar demographics in India, Indonesia, Kenya, Mexico, Nigeria, the Philippines, South Africa and Vietnam offers insight into perceptions of wealth distribution and the steps that people are willing to take to address it.

If these responses are representative of the greater public, we can draw two conclusions. First, that people across the world can see and understand the economic disparity around them; and second, that they don’t believe the economic system in which they live can offer a tax-driven solution. This level of disenfranchisement should be of great concern to those in power.

Here’s why: when people become marginalized, they take to the streets. Indeed, our respondents are already familiar with protest. An average of 33% reported that they have taken part in demonstrations against political or business organizations. In India, Indonesia and Kenya, that number is as high as 45%.

These people are the world’s emerging middle class, the “next billion” consumers. If they are to be the major growth engine of our global economy, they must share in the benefits of economic growth. If not, it is likely that we will see them turning against the interests of the state in favour of their own well-being.

Image:  High rise buildings are seen behind a slum in Mumbai REUTERS/Arko Datta

Capital markets have a key role to play in helping the world reach its net-zero goals as they are central to steering partnerships and green investments.