Which Latin American countries are best for trade?

The Global Enabling Trade Report 2014 is released ahead of the World Economic Forum on Latin America in Panama.

Over the last decade, the economic performance of Latin America has, generally speaking, improved. The continent’s growth has been in line with the world average and above that of advanced economies. However, long-term prospects are increasingly uncertain, with a slowdown of economic growth and a rise in inflation in some countries, accompanied by social tensions around the region.

As Latin American economies try to move away from a model that relies on the exporting of raw material, a major driver of change could be trade and participation in cross-border supply chains, just as they have been in other emerging countries, particularly in Asia.

While Latin America continues to rely heavily on exports of raw material and, increasingly, oil and fuels, some countries within the region have managed to diversify their economies by joining regional and global supply chains. This is particularly true for economies that were able to attract investments from North America and elsewhere (Mexico and Costa Rica, but also the Dominican Republic and Panama), increasing their economic integration and establishing local manufacturing capacity.

Looking at the share of trade in parts and accessories is a quick way to identify which countries have been most successful at integrating into cross-border supply chains. While Latin America generally lags behind other developing and advanced economies, with exports of parts and accessories accounting for less than 10% of total exports, this performance conceals large variations within the region.

Although the best performing countries are mostly in Central America, where proximity to the large North American market favours foreign investments and economic integration, geography alone is not sufficient to explain cross-country variation. Countries such as Costa Rica and Panama managed to integrate into the cross-border supply chain more effectively than neighbours El Salvador, Nicaragua and Guatemala. Differences in economic environments explain a large part of this variation.

The Enabling Trade Index (ETI) is a useful tool when it comes to assessing the capacity of countries to facilitate the flow of goods over borders and along supply chains. In order to establish and control long and complex supply chains across different countries, you need advanced logistics and transport services, and you need the country to be technologically ready. Customs procedures and border administration need to be efficient and transparent, as unpredictability can be disruptive to the entire supply chain. The index takes all of these elements into account, as well as measuring how open the domestic and foreign markets are, and the overall quality of the operating environment. 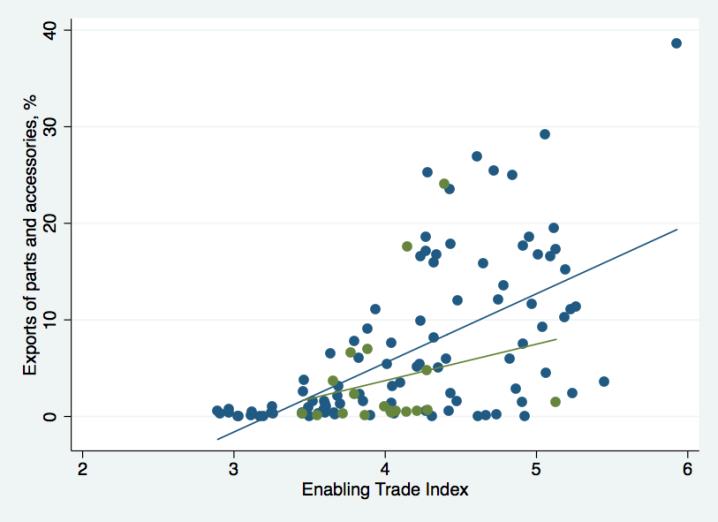 The graph to the left shows the positive relation between the Enabling Trade Index 2014 and the share of trade represented by parts and components. The green dots and green line indicate values for Latin American countries, while blue signifies the entire set of countries measured in the index. The relation is stronger for exports than imports, as many developing countries need to import components for the production of final goods sold on the local market, but are not able to provide other economies with sophisticated production inputs.

This relation also holds true for Latin America. Of the regional performers in the Enabling Trade Index, Costa Rica and Mexico are among the top (ranking second and sixth, respectively, out of 21) and have managed to integrate well into global and regional value chains, with parts and accessories accounting for 24% and 17.5% of their exports, respectively, in 2012.

Other countries have not been as successful. The share of exports of parts and components for El Salvador, Guatemala and Nicaragua was around 0.5% in 2012. Exports from Chile, the best regional performer in the Enabling Trade Index, are still very dependent on copper and other primary industrial supplies. Exports of parts and accessories accounted for only 1.44% of its total in 2012, revealing that Chile has not yet carved a role for itself as a supplier of more sophisticated production inputs. This is a challenge that the country will have to take up in the near future to ensure long-term, sustainable economic development.

Authors: Margareta Drzeniek-Hanouz is Director and Lead Economist and Attilio Di Battista is Junior Quantitative Economist for the Global Competitiveness and Benchmarking Network at the World Economic Forum.

Image: A worker is seen as a ship passes by the pacific side of the Panama Canal in Panama City January 18, 2013. REUTERS/Carlos Jasso

Less than 50% of Latin America has fixed broadband. Here are 3 ways to boost the region's digital access

As Latin America and the Caribbean emerge from the pandemic, the region's governments must address uneven and costly digital access for an inclusive and resilient recovery.

Fernanda Beigel from the Universidad Nacional de Cuyo makes the case that Latin America has the optimal conditions to create open science infrastructure.

COVID-19 cost Latin America and the Caribbean 1.5 million jobs. Here’s how to recover them

China’s trade with Latin America is bound to keep growing. Here’s why that matters