Are capital controls a magic bullet?

Capital controls are back. The International Monetary Fund has softened its earlier opposition to their use. Some emerging markets – Brazil, for example – have made renewed use of controls since the global financial crisis of 2008–2009. A number of distinguished economists have now suggested tightening and loosening controls in response to a range of economic and financial issues and problems.

While the rationales vary, they tend to have in common the assumption that first-best policies are unavailable and that capital controls can be thought of as a second-best intervention. One set of studies considers a setting in which output fluctuates because nominal wages are rigid and monetary policy is not available to manipulate the price level (Schmitt-Grohe and Uribe 2012a, 2012b, Farhi and Werning 2012). A second strand characterizes capital controls as a device for optimally manipulating the international terms of trade (De Paoli and Lipinska 2013). A final strand argues for the flexible use of capital controls to buttress financial stability (Ostry et al. 2012, Forbes et al. 2013).

However intriguing the arguments, the approach they recommend is one with which we have little experience. As we show in a new paper, governments have rarely imposed or removed capital controls in response to short-term fluctuations in output, the terms of trade, or financial-stability considerations. Once imposed, controls stay in place for long periods. Once removed, they are rarely restored. Rather than fluctuating at a business cycle frequency, the intensity of controls tends to evolve over long periods in line with variables such as domestic financial depth and development, the strength of democratic checks and balances, and the quality of regulatory institutions, which similarly evolve slowly over time.

We as a profession simply have little knowledge of how the economy will operate if capital controls are adjusted at high frequency, since controls have historically been adjusted infrequently.

In 1996, 169 countries and territories provided the IMF with data concerning controls on capital market securities; 127 of these had restrictions.That is to say, these controls were pervasive. Of those same 127 countries, 116 (91.3%) still had such controls in 2012. That is, controls were persistent. And, as shown in Table 1, what was true of controls on capital market securities was true of other capital control measures as well. 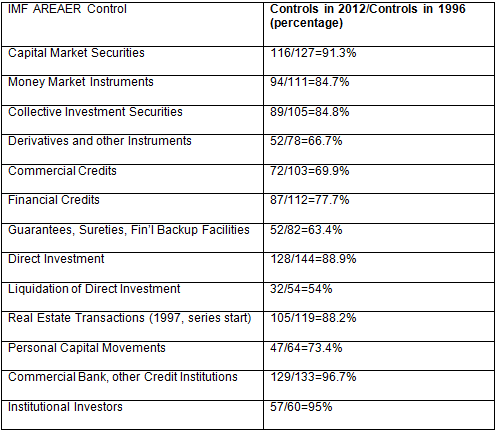 Figure 1 contains a series of histograms showing the length of spells of different types of capital controls. The top-left graph presents the length of spells for controls on capital market securities. A subset of countries had no such controls between 1996 and 2012; these countries make up the peak at the left of the graph. As the eye moves to the right, the line falls – few countries had controls in place for periods of one, two, three or more years – until one arrives at the extreme right of the graph where the series ends with a spike. Fully 98 countries had capital market security controls in place for all 17 years between 1996 and 2012. And controls on capital market securities are typical of the other types of controls. In the bottom row, second panel from the left, the different kinds of controls are aggregated, and the resulting aggregate displays the same pattern. 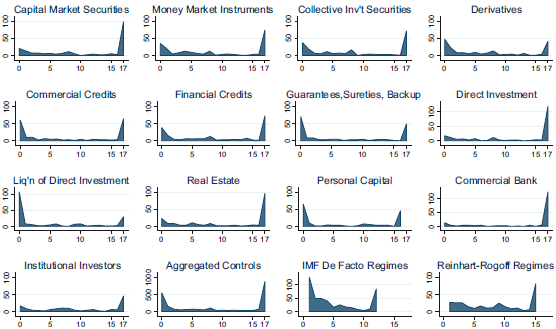 Although recent theoretical literature points to the possibility that governments may adjust controls in response to cyclical developments and macro-prudential considerations, we are sceptical of the empirical relevance of these arguments. It seems difficult to understand the sluggish nature of capital controls with cyclic macroeconomic and financial phenomena. Still, these are testable hypotheses. In our work, we have attempted to link the incidence of capital controls to inflation, GDP growth, the terms of trade, the lagged capital account as a percentage of GDP, and domestic credit growth adjusted for inflation. In practice we find little sign that governments impose or remove controls in response to changes in these variables.

One partial exception is domestic credit growth, where there appears to be some tendency for governments to loosen or remove controls when credit growth accelerates – the opposite of what the macro-prudential rationale would imply.

Since controls move slowly, it seems more plausible to attempt to relate them to country characteristics such as financial depth and development, the strength of democratic checks and balances, and the quality of regulatory institutions, that are themselves slow-moving. In our new paper, we present some evidence suggesting that these factors could indeed be responsible for the movements in controls. In particular, we find a robust, statistically significant negative correlation between the incidence of controls, on the one hand, and these measures of financial development, political development, and institutional development, on the other. The same is true for almost all measures of capital controls considered.

A handful of countries have succeeded in adjusting their capital controls counter-cyclically – tightening them when large amounts of foreign capital are flowing in and loosening them when the surge subsides. Sometimes the aim is to insulate asset prices and domestic credit extension from the effects of the inflow, other times to prevent the real exchange rate from appreciating undesirably, and still other times for a combination of these reasons. Brazil is a prominent case in point, having repeatedly tightened and loosened its controls with the ebb and flow of capital movements. A few other examples – Indonesia, Thailand, and South Korea – can similarly be cited. But, as our evidence shows, they are exceptions.

This reluctance to adjust controls at a cyclical frequency has two explanations. First, imposing controls in a country with no recent history of them runs the risk of sending a negative signal (Bartolini and Drazen 1997). It reflects the presumption that first-best policies are unavailable. Resorting to controls to dampen the inflation associated with capital inflows may be taken as an indication that more conventional instruments, such as a tighter monetary policy, are not available because of, inter alia, the adverse impact on a fragile banking system. Resorting to controls to limit real exchange rate appreciation may be taken as an indication that the political system lacks the capacity to implement a more conventional tightening of fiscal policy. This adverse signal will be absent or at least weaker for a country that regularly uses controls and has adjusted them previously.

Second, adjusting controls at a cyclical frequency will be easier, from a technical standpoint, for a country with some form of controls already in place. It will possess the relevant bureaucracy, obviating the need to set up a new one. It will have systems for monitoring financial transactions, which is more convenient than having to establish entirely new ones. Brazil, for example, had a long history of capital controls, most of which it finally removed by the middle of the last decade, at which point it had an all but fully open capital account.

Recent years have seen a reassessment of capital controls as instruments of macroeconomic and macro-prudential management. While this reassessment is welcome, resort to these instruments for the purposes of macroeconomic and macro-prudential management identified in these recent papers is rare. Any new policy initiative mandating frequent shifts in controls is based on theory rather than data-driven experience. We have pointed to several explanations for this disjuncture.

First, policy-makers continue to attempt to implement first-best policy responses where possible, using conventional monetary and fiscal policies in response to macroeconomic cycles and conventional regulatory instruments at the domestic level in response to financial risks.

Bhagwati and Ramaswami (1963) famously made the argument in the context of trade policy that, when there exists a domestic distortion, intervening with the first-best domestic intervention beats responding with a second-best tariff or quota. That argument applies in the current context as well.

Second, governments are reluctant to resort to controls where a control apparatus is not already in place.

Doing so may send an adverse signal. It may be taken as an indication that the first-best policies on which policy-makers previously relied are not available. Enforcement is difficult where the relevant bureaucratic apparatus has been dismantled. The lesson here is that countries anticipating having to resort to controls for purposes related to macroeconomic or macro-prudential management should hesitate before dismantling their control apparatus. Having done so and moved all the way to capital account convertibility, it can be difficult and costly to go back.

Bhagwati, Jagdish and V K Ramaswami (1963), “Domestic Distortions, Tariffs and the Theory of the Optimum Subsidy”, Journal of Political Economy, 71: 44–50.

Image: A trader looks up at a chart on his computer screen while working on the floor of the New York Stock Exchange. REUTERS/Lucas Jackson