Four things not to do in an economic crisis

In some countries, the deflation tendency is most probably due to inadequate demand in the market and falling wages. If demand was adequate, but supply was deficient, rising inflation would by now be the major problem. Liquidity traps  ̶  situations where lenders cannot find borrowers to lend available surplus money to  ̶  should have been a flashing red light. Policy-makers should have given greater attention to resolving, or bypassing, such traps with new economic policies.

The loss of trade competitiveness is evident and most sustaining in eurozone periphery countries, reflecting the combination of a common currency and widely different cost and price trajectories across eurozone countries.

Another pertinent problem is high unemployment, which is not due to excessive growth in real-unit wage costs, as profitability has risen to record levels in many countries, and real wages are generally falling and not rising in afflicted countries. This suggests that the unemployment problem is not of the “classical” variety (excessive real-wage costs), but predominantly of the “Keynesian demand deficiency” variety.

Ever since the gross excesses in the use of the printing press and new-money financing of deficits and debt during the period of German hyperinflation (under the authority of a private central bank), bond financing has become the preferred method of deficit financing. So, when the crisis hit, it was natural for policy-makers to not even consider whether bond financing would continue to be appropriate. This raises the possibility that a large policy mistake was made, which added directly to the size of the public debt (see Buiter 2014 and Wood 2013).

We will return to the issue of the methods of financing budget deficits later.

The initial general monetary-policy response to the financial crisis was undoubtedly appropriate. The subsequent development of monetary policy, particularly from late 2010 onwards, is, however, highly controversial.

Despite years of profligate money creation by Japan and the US, there has been no evidence of “demand-pull” or “cost-push” inflation. When one-off events (including the tax hike and higher energy prices in Japan) are taken into account, the deflation tendency remains.

Enterprises, particularly in the US, were highly profitable in late 2010; commercial banks, too, already had massive financial resources in reserve accounts; they did not need further quantitative easing.

The unemployed, low-income households and the disadvantaged (all with high marginal propensities to consume) were not recipients of the new money provided under the asset purchase programme – that money never reached the real economy. Those who received the new money were commercial banks, traders, speculators, financial investors, high-wealth individuals and hedge funds. They all have a low marginal propensity to consume ordinary goods and services.

The attempted flattening of the yield curve caused risk-taking to become distorted. Now, time-and-interest-rate-dependent purchasing, investment, leverage, production and savings decisions are all being distorted. Excessive debt and risk-taking is being encouraged.

In the wake of massive injections of new money (quantitative easing) into global financial markets, it is not surprising that price bubbles are now being encouraged in the stock-markets, as well as in property (as in the US, UK, Germany, Australia, Canada, Switzerland and New Zealand), commodities (gold), bonds (10-year US Treasury Note) and in selected exchange rates. Collateralized debt obligations are again booming, and levels of private debt are rising strongly. Arguably, asset prices have already moved far beyond what the real economic fundamentals would suggest is reasonable.

Thus, the continued application of quantitative easing beyond 2010 has arguably represented an additional policy mistake.

Directing new money to finance-only commercial banks and financial markets is unwise. We will return to this issue and explore an alternative monetary policy approach later in this article.

Blanchard and Leigh (2013) and De Grauwe and Ji (2013) have reasonably argued that fiscal austerity policies have been counter-productive. These policies  ̶  cutting government expenditure or raising taxes  ̶  contribute to deeper recessions and higher public debt.

The adoption of fiscal austerity policies represents yet another policy mistake.

According to the European internal devaluation philosophy, austerity reduces aggregate demand and pushes up unemployment. In turn, rising unemployment is expected to moderate wage claims and lead to reductions in the growth of nominal wages. The rise in prices is then expected to fall in line with the reduction in wages. The intended result is that national price levels decline in trade-deficit countries (relative to those in surplus countries), and competitiveness in the deficit countries is improved.

The reality is that, for many reasons – including weak competition policies, market segmentation, different institutional arrangements across national borders, and rigidity in product and labour markets – nominal wages (wages’ growth in some countries) have fallen in many periphery countries by more than prices (growth in prices); hence, real wages have declined. This fall in real wages has likely contributed to the weakening of demand.

In the meantime, Germany has maintained a high level of wage and price competitiveness relative to many periphery countries. There has been no convergence (see Chart 1 and Wood 2014). Under current Germany policy, the adjustments needed to restore competitiveness in periphery countries would necessitate further reduction in southern wages, which would push those economies further away from internal balance.

So, austerity, reliance on market forces, and internal devaluation represent another policy mistake. An alternative approach is suggested below. 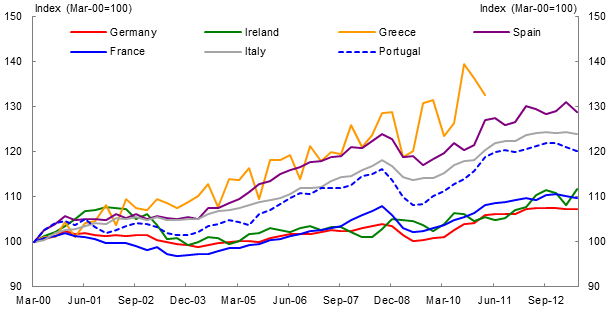 An alternative set of macroeconomic policies

As interest rates are at, or close to, zero bounds, and liquidity traps are widespread and constrain expansion, one might think that all monetary policy options have been exhausted. Fortunately, this is not the case.

The plan involves the creation of new money, by a central bank or by the Treasury/Ministry of Finance. As the new monetary policy is adopted, the old monetary policy  ̶  quantitative easing  ̶  can be withdrawn. The new money should be used to finance a large stimulus budget deficit and boost household incomes.

What overt money financing does is as follows:

As internal devaluation has been ineffective in the eurozone, consideration could also be given, on a case-by-case basis, to the adoption of centralized wage and price policies, or incomes policies, to bring about the appropriate price and wage levels in individual eurozone countries, including wage and price increases in highly competitive surplus countries. In this way, the large, 18-country convoy can reform the line and steam ahead in closer alignment.