We must end extreme inequality. Now.

There is an overwhelming consensus that things must change. For three years the World Economic Forum has listed growing income inequality as a major global risk, a warning echoed by Professor Klaus Schwab. Then at Davos in January, Oxfam launched a report that revealed 85 people own as much wealth as the bottom half of humanity. This captured the public imagination everywhere, went viral on social media, sparked debate, and made headlines across the world.

My favourite related anecdote comes from a colleague who had been visiting a tiny, remote village in rural Vietnam. When he got there, a local smallholder farmer approached him to ask if he’d heard about the richest 85. As Andrew Haldane, the chief economist of the Bank of England, said, this statistic “touched a moral nerve among many”.

I was at Davos at the time, and what I saw was that faith, power and money were all converging and agreeing on the urgency and importance of addressing this extreme and growing inequality.

Over the past year, people everywhere have continued to raise this issue. Leaders as diverse as Pope Francis, Christine Lagarde, President Obama and wealthy philanthropists like Warren Buffett have spoken out – as if singing from the same songsheet – about the dangers of growing and extreme inequality. So much so, that we can now claim a broad consensus on the causes and problems of inequality. What we need now is a shared agenda on the solutions.

Today Oxfam is launching a new report, Even it Up: Time to End Extreme Inequality. Based on our experience on the ground, and evidence from researchers and thought leaders from around the world, it demonstrates that inequality is spiralling out of control, and has consequences that are bad for both rich and poor. Unequal countries have higher levels of crime and conflict, which affects everyone, and inequality dampens long-term growth. Crucially for Oxfam, the evidence clearly indicates that today’s extremes of inequality are threatening to set back the fight against poverty by decades. 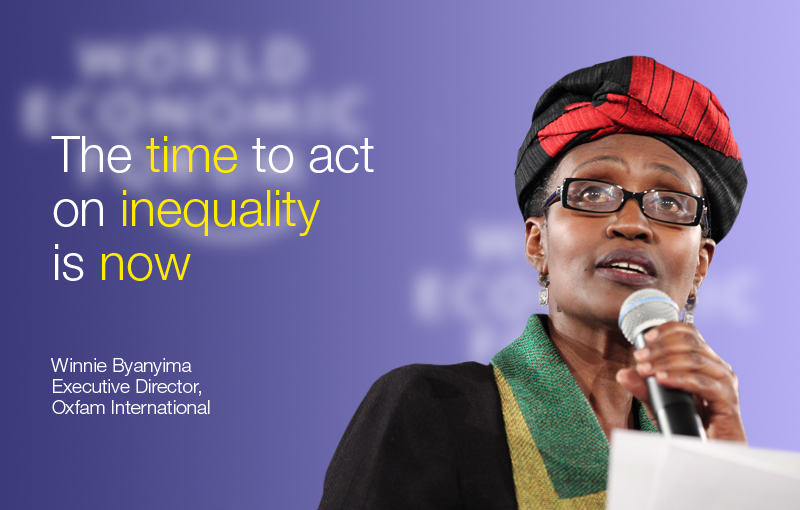 Our new research shows that in countries like Kenya, Indonesia and India, millions more people could be lifted out of poverty if income inequality were reduced. Take the example of India: if the country were to stop inequality rising, they could lift 90 million more people out of poverty by 2019. In Africa, where I was born, the target of eradicating extreme poverty won’t be met until 2075 unless there is a reduction in income inequality.

This report is the start of a new long-term Oxfam campaign, also called Even it Up, to push world leaders to turn rhetoric into reality and close the gap between rich and poor.

We all know that inequality is not inevitable. There is much that we can do to reverse inequality if we join together around solutions that can create a fairer and more equal world. A world that will be better for all of us. Leaders including Kofi Annan, Michael Sandel and Graça Machel have supported our call to action. Nobel prize-winning economist Joseph Stiglitz has endorsed the report ,calling it “a timely reminder that any real effort to end poverty has to confront the public policy choices that create and sustain inequality”.

How then can we tackle extreme inequality? We will be focusing on pushing for change in four main policy areas.

First, urgent tax reform is needed. This remains the most effective redistributive mechanism we have at our disposal to tackle the growing gap between rich and poor. This requires reform at the national and international level, as well as at the individual and the corporate level. Governments need to ensure that the tax burden falls fairly so that those most able to pay contribute more. They must put an end to fragmented global rules and tax loopholes that reward those who avoid their civic obligation, and leave the poorest to foot the bill.

Secondly, greater investment is needed in public services, like healthcare and education, which can be great equalizers and can mitigate the worst effects of today’s skewed wealth and income distribution. Good-quality, free public services have the power to transform societies by enabling people to improve their life chances.

Thirdly, we should focus more on decent work and wages, and question skyrocketing executive pay, which is a recipe for growing inequality. In 2014, the UK’s top 100 executives took home 131 times as much as their average employee – how long can those who benefit continue to claim that this is justifiable? Eradicating working poverty by making work pay – through the provision of living wages, decent living conditions and by protecting the rights of workers to organize –  is a first step on the road to reducing inequality.

Lastly, we will be calling on governments to reduce inequality by changing the rules and systems that have led to today’s inequality explosion. We’re asking them to ensure that their primary concern is responding to the needs of their citizens rather than being unduly influenced by affluence.

The past year has shown us that people around the world are demanding action on inequality. We are joining in support of them. I will be working hard to bring these issues to the table again at next year’s World Economic Forum Annual Meeting and will be asking political and business leaders to join me in this conversation.

Are any of you wondering what happened to those, now famous, 85 billionaires since January? They’ve seen their collective wealth increase by $668 million every day over the past year. That’s almost half a million dollars every minute. It could not be clearer: the time to act on inequality is now.

Image: Slums are seen along a river with the skyline of Makati, Manila’s financial district, in the background. REUTERS/Cheryl Ravelo

Here's how to reap benefits of the 'digitalization in banking' trend

Digitalization in banking is a top trend in the industry but to advance, banks must centre customer concerns and increase international collaboration.