America’s sea change in how we look after the ocean

On September 25, 2014, at a high-level meeting in New York, US Secretary of State John Kerry said that, viewed from space, our planet is “blotches of green surrounded completely by blue”. As a matter of fact, if an alien made a random landing on our planet, it would have a 72% chance of landing in the ocean. Yet, despite covering the majority of our earth, only 2% of the ocean is protected from human activities such as fishing and habitat destruction.

The same day as Kerry pronounced those words, President Barack Obama, with the stroke of a pen, did more to protect our ocean legacy than any other leader in history. Using his executive powers under the Antiquities Act of 1906, he expanded the Pacific Remote Islands Marine National Monument, originally created in 2009 by George W Bush. Obama added more than a million square kilometers to the Pacific reserve, which is now the largest protected area on the planet, land or sea. 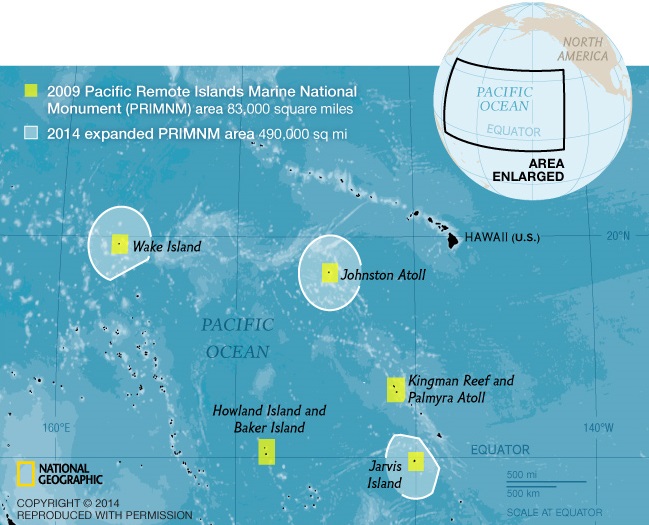 I have visited the remote Pacific islands. I am one of the few humans fortunate enough to have dived there, and to have seen the abundant fish, healthy coral reefs and millions of seabirds that nest there. After spending time in some of the most remote areas of the ocean, through our National Geographic Pristine Seas project, I can say that these newly protected waters are among the purest we have ever seen. And I was one of the happiest men on earth when I heard Kerry announce their permanent preservation.

The protection of the coral reefs and near-shore waters now extends to the full extent of America’s 200-mile exclusive economic zone for three of these islands. This area will safeguard the feeding grounds for up to 14 million seabirds, as well as the marine mammals and sea turtles that live there. Some of these species, such as the extraordinary leatherback turtle, are endangered – yet they die by the thousands every year, caught in the wall of hooks placed in the ocean by the tuna industry to satisfy our appetite for sashimi.

Because of people, wildlife extinction rates are up to 1,000 times higher than they would be naturally. Some species of ocean predators, such as sharks, groupers and bluefin tuna, are at less than 10% of their pre-exploitation abundance. We have eaten them all. Setting aside such a large conservation area will slow their decline. Some of them, like the leatherback turtle, shared the planet with the dinosaurs, a hundred million years before modern humans were born.

I fervently hope that Obama’s gesture marks the US government’s first step towards establishing what could be the largest ocean conservation legacy in history.

The ocean gives us more than half of the oxygen we breathe; it regulates the climate and provides food and livelihoods for hundreds of millions of people, mostly in developing countries. But we are treating it like a bank account from which everybody withdraws and nobody makes a deposit. Overfishing, pollution and, increasingly, climate change are depleting marine life – and with it go the essential goods and services that make our lives on this planet possible. We must view marine reserves (such as the remote islands) as nature’s savings accounts, where our principals earn interest that we can enjoy.

Scientific studies show that marine reserves produce, on average, a 450% increase in fish biomass within just a decade of creation. Increased reproduction inside the reserves also helps to replenish fish populations nearby, which benefits local fishers. Additionally, an abundance of fish attracts eco-tourists, who help create jobs and increase economic revenue.

I hope other leaders will be inspired to set aside large ocean areas; there is still such a long way to go – and so little time. When it comes to global conservation, it’s clear that being fearless and bold is the only way to achieve our goals.

Further reading
Ocean tails: do you know your fish?
Three ways to save the world’s oceans
Sylvia Earle: Can we stop the killing?
Lewis Pugh: Why I’m swimming the seven seas