Unemployment is a global problem. If the unemployed formed their own country, it would be the fifth largest in the world. Of the nearly 200 million people around the world looking for work, half are in emerging markets and about a quarter in advanced economies, reflecting the growing weight of emerging markets in the global labor force (Figure 1). 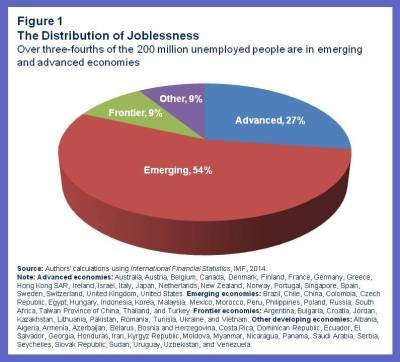 What can be done to lower unemployment? For advanced economies, economists have long advocated a simple cure: more growth. This is because the link between output growth and job creation is fairly strong in most advanced economies. For emerging markets, however, there is a widespread perception that unemployment reflects deep-seated structural problems that cannot be resolved simply through greater growth. But what is the evidence on how well growth works as a tonic for job creation in emerging markets and developing economies?

In new research (conducted jointly with Laurence Ball and Daniel Leigh), we provide an answer for a large group of about 80 countries, including the G20 countries. Our broad conclusion is that the relationship between growth and jobs holds well in a number of emerging economies. In frontier and other developing economies the relationship is much weaker.

Tonic for job creation in many countries 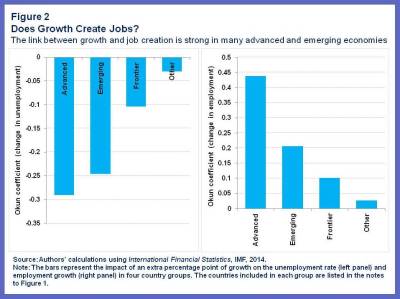 At the recent G20 Leaders Summit, the member countries discussed their plans to deliver extra growth significantly over the coming years. Our research can provide estimates of the extent to which this extra growth can deliver jobs in each country. As shown in Figure 3, for the majority of the G20 members the historical link between growth and jobs has been strong, ranging from 0.6 in the United States to about 0.2 in Russia. 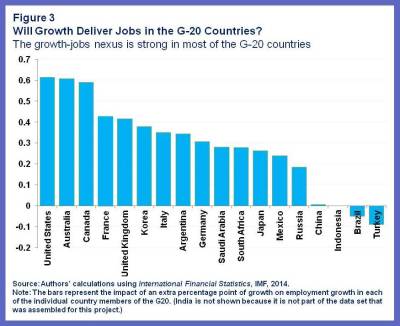 The evidence that extra growth will bring back jobs in many countries leads to the obvious question: what will deliver the extra growth?

As the IMF’s latest World Economic Outlook notes, this requires “continued support to domestic demand and the adoption of policies and reforms that can boost supply.” Without supportive demand policies, supply measures could have little impact in the short run. If companies do not see improved sales prospects, they will not increase capacity; hence, it is essential to ensure that the demand is there to sustain supply. But without supply measures, output gains based solely on a stimulus to demand will prove temporary.

What specific policies does this entail? Broadly speaking, in advanced economies, monetary policy should continue to support the recovery in demand. Fiscal adjustment, while attuned in pace and composition to the specific needs of countries, must be as growth-friendly as possible. Emerging markets are slowing down from pre-crisis growth rates. They need to primarily address underlying structural problems, which are quite varied across countries, from removing bottlenecks in the power sector to reforms on labor and product markets.

In many countries, there is a strong case for increasing public infrastructure investment, which would provide a much-needed boost to demand in the short term and would also help supply (i.e. potential output) over the longer term.

Our research suggests that growth can help job creation, though the extent to which it can do so varies across emerging markets, just as it does for advanced economies. Thus, while growth is not a panacea, it is an essential part of the cure for unemployment.

Published in collaboration with IMF Direct

Image: Job offers are seen in this illustration in Milan April 3, 2012. REUTERS/Alessandro Garofalo

3 steps for emerging markets to recover from COVID-19

The pandemic is expected to cause disproportionate damage to emerging market economies, put the right policies can help.