Why the world in 2015 faces a leadership crisis

A startling 86% of respondents to the Survey on the Global Agenda agree that we have a leadership crisis in the world today. Why would they say this? Perhaps because the international community has largely failed to address any major global issue in recent years. It has failed to deal with global warming, then barely dealt with the failure of the global economy, which has caused such severe problems in North America and Europe. Meanwhile violence has been left to fester in the Middle East, the region our Survey showed is most affected by, and concerned about this problem. So why are we suffering such a lack of leadership?

Well, as our governments have grown, their mechanisms have been plagued by decades of factional alignment, dynasty and deep corruption. In China, for example, 90% of people surveyed by Pew said corruption was a problem; separate studies found that 78% of Brazilian respondents and 83% of those in India regard dishonest leadership as a serious issue.

The deeper you go into these endemic failures, the harder it is for anyone to emerge as a strong leader; one is forced to play the game the way it’s built – which is inevitably in the interest of the system, and rarely in the interest of the people. In many countries, the only people with the institutional power to break through are strong military leaders or radicals like Narendra Modi in India. Yet, given the rise of independent and social media, populations with democratic experience swiftly become disillusioned with the excesses of these military authorities.

Why is this happening today, when we’ve had universal suffrage for over a hundred years in many countries? Perhaps we’ve finally realized we can do better. We have a surge of incredibly smart, enabled people coming out of education, building great companies and showing us the radical pace of innovation; this could explain why Survey respondents ranked business leaders second only to non-profit organizations in our Global Leadership Index. By contrast, when we look at our governments and international institutions, it is tempting to only see ritual, politics and little progress, and to wonder if these systems are just holding us back.

Indeed, the only people to rank lower than government leaders in our Survey were religious leaders. 58% of respondents had concerns that religious leaders would abuse their positions, and 56% thought that they were unlikely to be of help in addressing global problems. I think there’s been such a swell in religious violence recently, with the rise of terrorism, that people are becoming wary of religious leaders and are pushing for religion to be a personal matter. 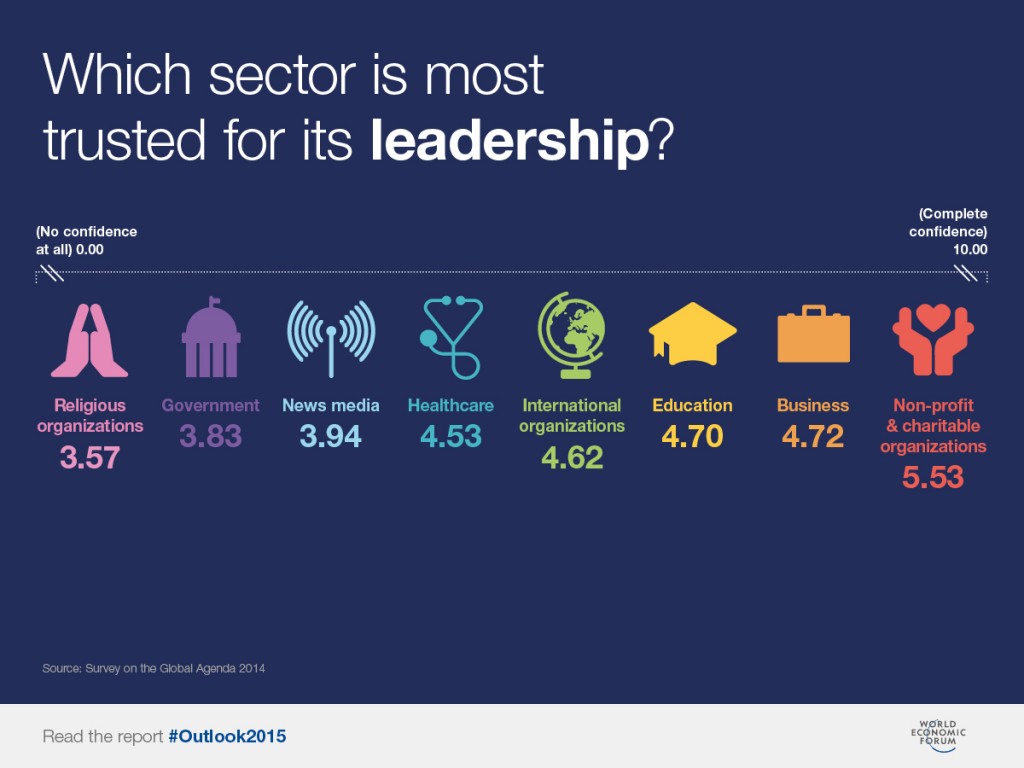 The question, then, is what skills do our leaders need to win back the confidence of their populations? The Survey respondents identified several virtues: a global interdisciplinary perspective; long-term, empirical planning; strong communication skills; a prioritization of social justice and well-being over financial growth; empathy; courage; morality; and a collaborative nature.

Looking at the person emerging from this profile, it’s not enough to simply be inspirational; the best leaders know they must mediate, listen and include the opinions of others before making a decision. Execution, team-building and delegation are key, as is the ability to remain positive in the face of adversity – the power of optimism is inspiring in itself.

Ultimately, these leadership qualities have to be cultivated. In the Survey, four out of the five regions prioritized training, coaching and mentoring as the best way to develop tomorrow’s leaders. There is a consensus that improved education of our polity will result in better leadership. African respondents also highlighted a need to involve youth more strongly in leadership development.

I met Malala Yousafzai when she was 11. She was from a remote part of Pakistan, even when the Taliban took over. Four years later, they shot her for speaking up and she survived, which somehow made her into one of the most powerful moral figures of today. Now she is the winner of the Nobel Peace Prize.

This shows us that we need to foster a culture where people see integrity and empathy as key character traits, where talent can rise up. Then the power of ordinary people will grow, great things will happen, and great leaders will emerge.

Author: Shiza Shahid is the Co-Founder and Global Ambassador of the Malala Fund

Image: A businessman walks on an illuminated walkway in Tokyo November 13, 2008. REUTERS/Yuriko Nakao

While some countries are advancing quickly in digital technologies, others are losing ground. With the right policies in place, new champions can emerge.