The problem with pink and blue Christmas toys

Apartheid exists, and it is multiplying in every aisle in every toys section of every high street store. Apartheid in the literal sense, meaning apart-hood or, to use an only slightly less controversial term, segregation. And it’s there, in the current retail fever of seasonal shopping, decked out in lurid festive pink and blue banners up and down the land.

Looking for gifts for my 8-year-old son Jedd and 6-year-old daughter Rocca, I visited one such store just prior to penning these words. Letting myself be guided by the in-store markers I quickly found myself surrounded by swathes of pink: pink glitter bead boxes, pink Monster High make-up kits, a pink-toned Barbie fashion model, a pinker than pink princess. It’s what I call the ‘pink it and shrink it approach’ TM which includes over-feminising and dumbing down. A ubiquitous hegemony of pink until I turned the corner leading to the blue, black and khaki world of boys’ action figures and racing cars. Gender segregation has even reached the bathroom, if the recently-launched gendered pink vs blue potty training super hero and potty fairy princess are anything to go by.

It was not always thus. Quite apart from the fact that pink only became associated with girls in the second half of the 20th century, toys themselves were far more androgynous in the 60s and 70s, with full-scale gender segregation not really setting in until the 90s. 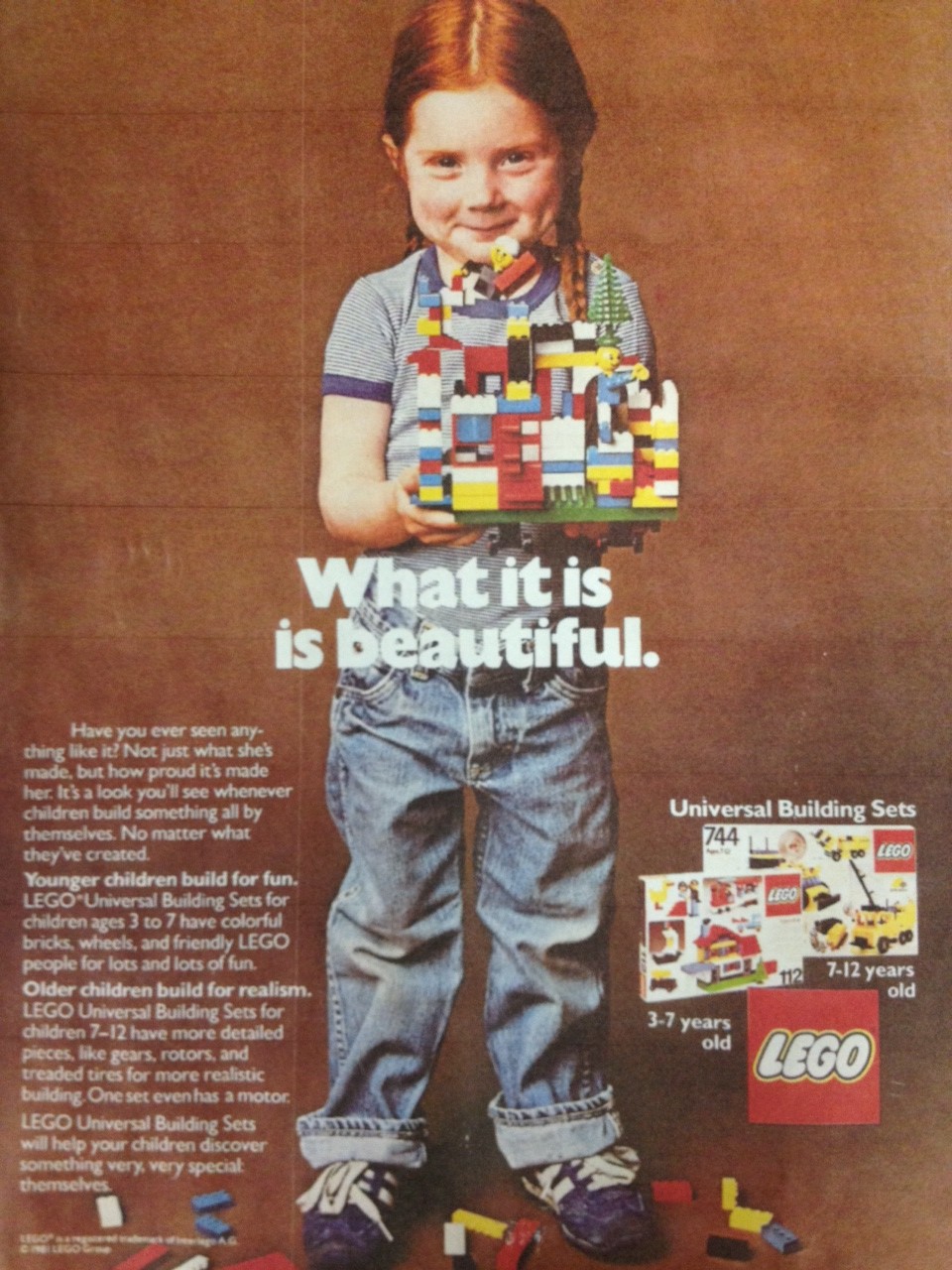 Take the evolution of Lego sets, which date back to the 40s. At first the building block sets were marketed as gender-neutral, and when the first Lego figurines were released in 1978, they were essentially genderless. Homemaker sets marketed at future housewives didn’t emerge until the 70s. 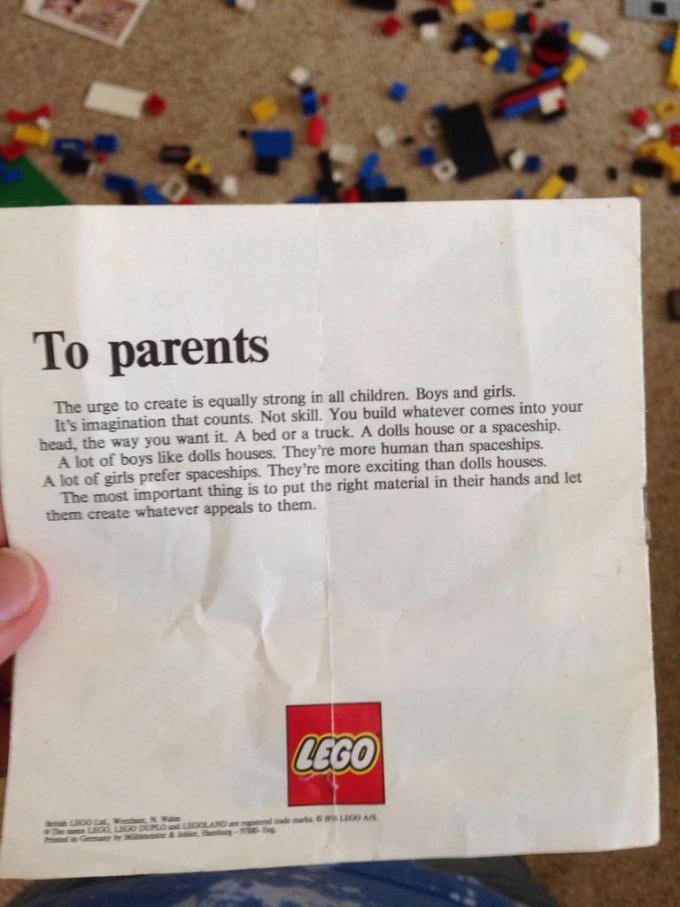 Lego’s first signs of gendered play, with the Scala jewellery theme of 1979, was short-lived at the time, but an indication of what was to come, as the 80s and 90s saw the rise of the Belville world, where the traditional Lego construction theme has been all but eradicated, and finally the fully pinked-up Clikits jewellery range. The message here is clear. If you are a girl, you are an essentially passive character, interested in make-up and fashion and aspiring to a life of home-maker. You are no longer even allowed to build a kitchen in which to do the housework.

If anyone is in any doubt about this, then the advert for the Lego Friends series makes for cautionary viewing, with the vacuous lives of the residents of Heartlake City revolving around home decorating, fashion styles and parties.

This in itself is an interesting development. The wave of feminism that railed against girls being directed towards traditional feminine role models (mother, housewife etc) has left them with no realistic aspirational role at all as far as toy marketing is concerned. As Elizabeth Sweet explain in The Atlantic magazine, the homemaker of the 50s has become the princess we see in stores today.

There are those that would argue in favour of the new Lammily doll, and it is certainly a move in the right direction. I recently took one home for my 6-year-old daughter to play with, and asked her to compare it to her Barbie doll. Lammily is, at any rate, a more realistic physical representation of the average modern woman, and when I asked my daughter what job this ‘person’ would have, her answers included teacher and computer programmer as opposed to fashion model or princess.

But even though Lammily looks the part of the modern woman, the doll itself remains passive. You can add a mole to her cheek or cover her face with fake acne, but this is still all about the way she looks. It’s all about appearance and not about what she does. Having eschewed the princess and model role, she is left with no role at all, which makes for a pretty poor role model. My conclusion is that we live in a post-doll era.

Anyone in any doubt about what these stereotypes involve should refer to the recent furore surrounding Mattel’s Barbie I can be a computer engineer book, in which she accidentally infects her friend’s computer with malware and needs a man’s help with any of the more technical issues.

So where should we be looking? The key concept here is that by segregating along gender lines, the toys market does not give children more choice, it actually takes it away by excluding each sex from the other one’s toy box. And I don’t want there to be a blue toybox and a pink toybox in my house. If we want our children to increase their social skills and tax their imagination and creativity through play, then boys and girls need to be playing together.

I want my daughter to be playing top trumps against her brother with a set of Match Attax football trading cards that include women players (at the moment they only include male players). I want them teaming up to create a world on Minecraft where they pretend to be visitors to an alien planet. My hope is that the playtime of the future will be an interactive and inclusive place, with the explosion of possibilities provided by multiplayer technology. We should be opening up our children’s options, not constructing barriers of exclusion. Forget pink and blue, our kids should be playing in technicolour.

Author: Belinda Parmar is the Chief Executive Officer of Lady Geek, and author of The Empathy Era and a World Economic Forum Young Global Leader. Follow her on Twitter:@belindaparmar @ladygeek