Africa is a critical continent to watch in 2015. The year ahead holds incredible opportunity – as well as considerable risk. Africa is poised to receive the global attention it deserves at top-level international meetings on financing for development, new global development goals and climate change.

But alongside such opportunities, the world’s fast-changing economic environment brings risk. Oil and commodity prices, which plummeted in 2014, are likely to remain unstable. And the banking system will be challenged by new regulatory and compliance frameworks. These macro changes have so far been greatly underestimated. 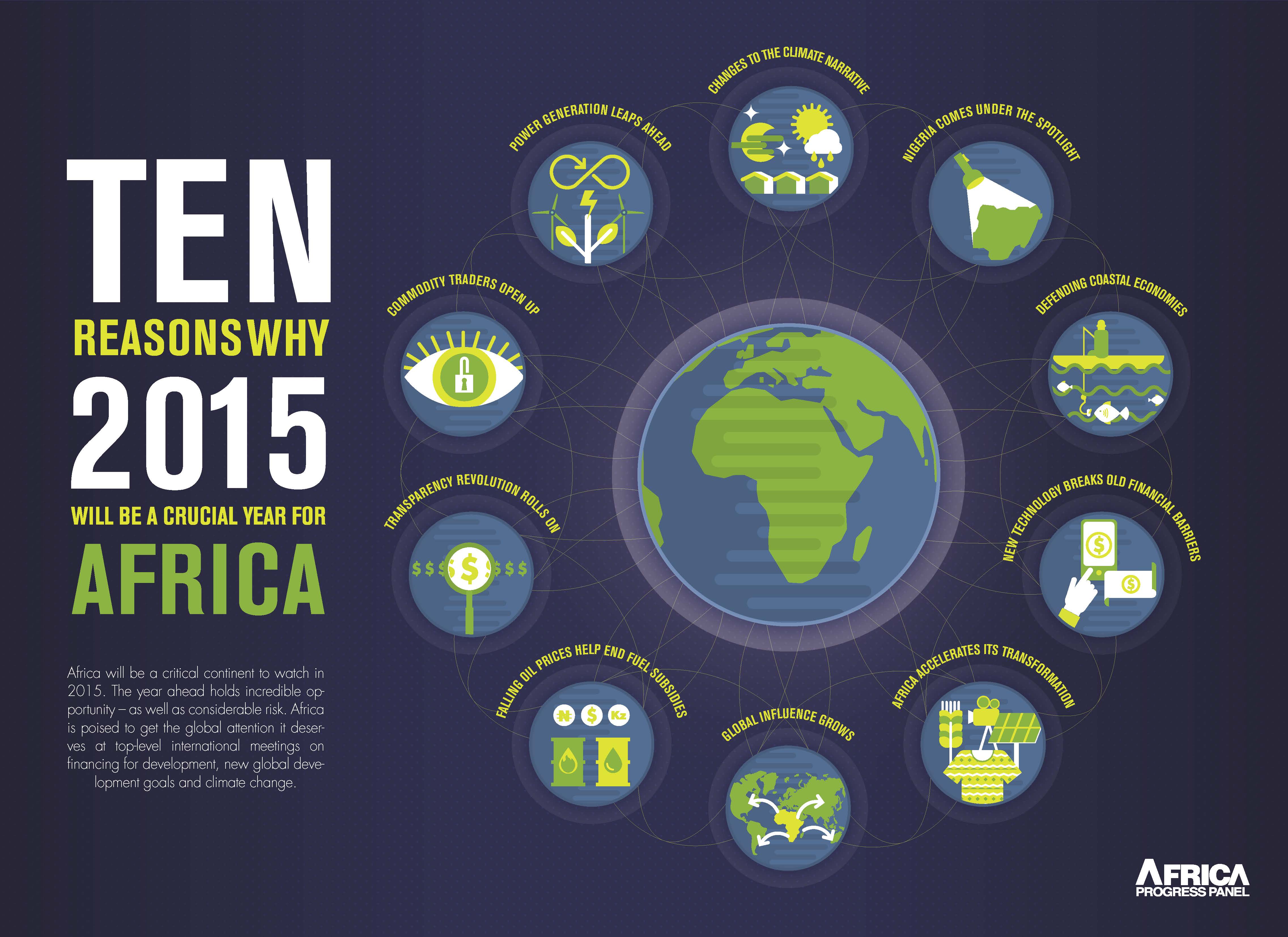 Here are some of the scenarios we see unfolding in Africa in 2015:

Power generation leaps ahead: Africa’s energy needs are huge –but so is the scope for energy-poor nations to leapfrog straight to clean energy. For now, fossil fuels are still vital to power homes, factories, schools, hospitals and overall economic growth.

But in spite of the oil price drop, renewable energy sources are poised to claim a huge and growing share of Africa’s energy mix.

Changing the climate narrative: Global climate negotiations have so far yielded little for Africa. In 2015, African nations will become more forthright, seizing the chance to shift the climate narrative from one of dependence to one of opportunity and transformation. Controversially, that will mean defending Africa’s continuing need to exploit fossil fuels, and showing the rich world that climate justice means investing more in clean energy and protecting African forests and farmers.

Breaking the finance barriers: A troubled global banking system, increased U.S. interest rates, tense climate finance negotiations and less international aid: for all these reasons, a lack of available finance is likely to be a key constraint for Africa in 2015. But in response, African investors and governments will innovate more.

Peer-to-peer banking and mobile banking will thrive. More and more Africans will embrace the power of domestic savings – and insurance markets will emerge as an exciting and effective means to invest those savings. As a result, African banks will finally face a much-needed shake-up.

Africa accelerates its transformation: The pace of investment into Africa will slow, as oil and gas exploration money drops off and higher US interest rates attract foreign investment to the United States. But many investors will see the long-term potential of a whole array of African industries, such as renewable energy, farming, fisheries and fashion.

African leaders and their partners will recognise that they need to seize the chance now to attract foreign investment while this brief opportunity exists.

Oil’s silver lining: Low oil prices will pose problems for many economies, including Algeria, Angola, Nigeria and Ghana, but will also offer opportunities for many to cut subsidies for fuel that have exacerbated inequality.

Nigeria in the spotlight: Africa’s most populous country and largest economy will remain tense ahead of its February elections, which will show the world both its incredible strength and fragility. Nigeria has a chance to set a course that will harness its brilliance and energy to be a positive global force.

Secrecy’s last stand: Africa will benefit from the continuing global push for greater transparency, including in the extractive industries. In the United States, resistance from the American Petroleum Institute to increased revenue transparency will be seen for what it is – a tiresome, reactionary trend to the global transparency revolution.

The US will push ahead with implementing the Dodd-Frank Act and plans to join the Extractive Industries Transparency Initiative (EITI). More Swiss-based commodity companies will sign up to the EITI Standard, following Trafigura, which announced its new policy in November 2014.

The Swiss commodity-trading sector has long been viewed as the last bastion of secrecy, standing firm against a global revolution that elsewhere is bringing transparency to the oil, gas, and mining industries and their operations in Africa.

Making profits public: The crackdown on corporate secrecy in Europe, including anonymous company ownership, will continue. And the United States will be forced to follow suit. Countries will feel increased pressure to make public registers of who owns companies – denying shelter to those who have been hiding illicit gains from Africa.

A global alignment of interests will see business leaders, the banking industry and law enforcement authorities increasingly raise their voices in favour of this level of transparency.

Defending coastal economies: Closer to home, some African nations will support the Port State Measures Agreement, which needs 25 national ratifications before it enters into force. Africa has 35 coastal nations (38 counting island states) and has some of the world’s regions worst hit by illegal fishing. Africa’s role will therefore be critical in pushing forward this important global agreement.

Global influence grows: And as always, the continent will continue to build its pan-African identity and cultural influence around the world. Watch out for Africa fashion and films going global, the rise of pan-African banking, pan-African food markets, and new pan-African social media platforms (such as Mara Online) emerging to challenge the global giants of Twitter, Facebook and LinkedIn.

Kofi Annan’s Africa Progress Report to be released in June 2015 on climate change, energy and agriculture in Africa.

Image: A view is seen of the Nigeria stock exchange building in the central business district in Lagos April 10, 2013. REUTERS.