9 years of the Global Risks report

When the Global Risks report was launched in 2006, the world was approaching the brink of a financial crisis that would have far-reaching consequences for economies and societies. The purpose of the original report wasn’t so much to single out immediate, short-term risks, but to give policy-makers the insights they needed to deal with uncertainty over a ten-year time frame.

Nevertheless, the threats highlighted in the report over the last nine years offer a glimpse at the events which have shaken the world and called for new forms of collaboration between leaders.

Back in 2007, one year before the implosion of the investment bank Bear Stearns, the collapse of asset prices was identified as one of the top five global risks in terms of both likelihood and impact. The far-reaching effects of the downturn were also a concern for our experts, who for consecutive years from 2007 were warning of the further risks fiscal crises posed to the global economy.

More recently, the most significant risk facing the global economy has come to be seen as unemployment and underemployment, with severe income disparity featuring as the most likely global risk every year for the past three years.

Away from the global economy, other recurring trends in Global Risks over the years shed some light on what the world perceives to be its greatest challenges. In 2011, for example, while most countries were still struggling to pull themselves out of recession, our experts attributed four of the top five most likely risks to the environment. In the same year, climate change was listed as the second highest risk in terms of impact, as concern grew about the lack of action to take effective measures to adapt to or mitigate the problem.

Societal risks have also featured strongly over the past nine years of Global Risks. Alongside income inequality, another perennial risk has been water supply crisis, which in 2015 will be classified as a societal risk for the first time. It featured as the second highest risk in terms of impact both in 2012 and 2013, and as the third highest risk in 2014.

Pandemics, too, have been a frequent feature of the Global Risks landscape. Back in 2007, as H5N1 was reviving fears of a highly pathogenic influenza virus, pandemics ranked as the fourth most impactful global risk, staying in the top five the following year, too.

Geopolitics has featured only periodically in the upper echelons of Global Risks since 2006. While retrenchment from globalization may have ranked as the second most impactful risk in 2007 and 2008, geopolitical conflict has only once appeared as a top-five risk in terms of impact. This was in 2011, when it ranked third. Twenty-five years after the fall of the Berlin Wall, and with strategic competition between nations on the rise, it will be interesting to see if it features prominently as a global risk in 2015. 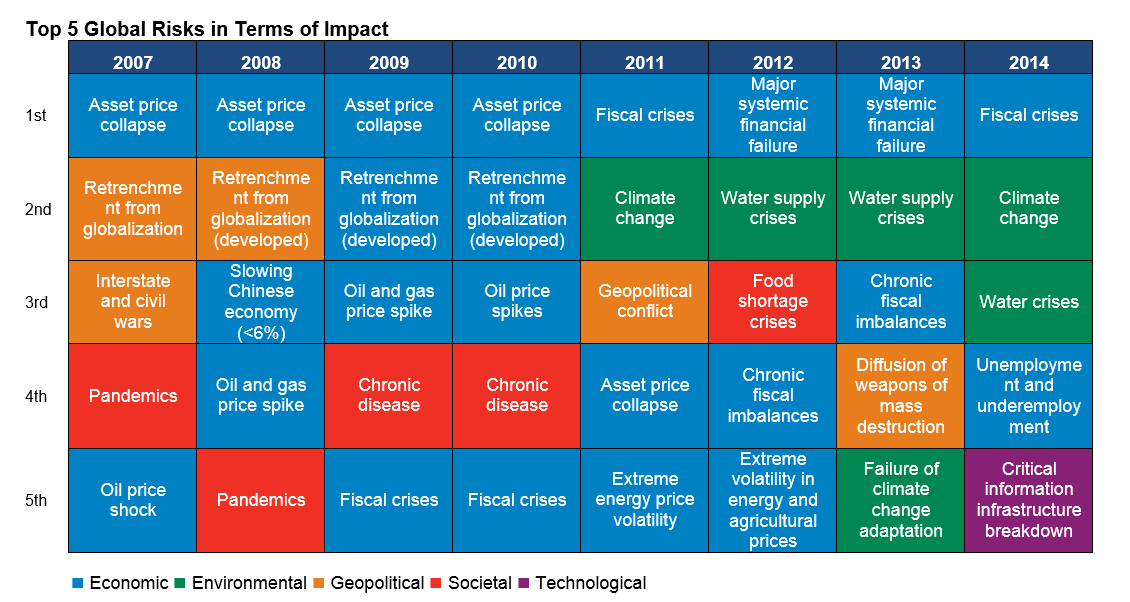 Alongside these individual risks, hindsight allows us to discern some broader shifts in the way our experts view global risks. Looking at the tables below, which outline the top five risks in terms of likelihood and impact for each year from 2007 to 2014 (we didn’t rank risks back in 2006), we see the blue – economic – risks more or less dominating both tables in the first four years that we collected data. What is interesting is that while they still feature largely in the years 2011 to 2104 in terms of impact, when we measure likelihood they give way considerably to rising concern over both environmental risks and societal risks when we assess them for likelihood.

If fears for the environment, along with the societal impact of income inequality, are looking like they are overshadowing economic risks, other outliers are also appearing on the risk horizon with increasing frequency. Note the two yellow geopolitical risks – corruption and geopolitical conflict – in 2011, followed in 2013 by another, Diffusion of weapons of mass destruction. Note also the rise of technological risk. Back in 2007, our experts’ assessment of Breakdown of critical information infrastructure as the most likely risk threatening humanity may have looked like a statistical anomaly, but fast forward to 2012 and the purple squares are beginning to make a comeback, with infrastructure breakdown and cyber attacks both featuring as top five risks in 2014.

Global Risks 2015 will be published on January 15.

Author: Oliver Cann is Director of Media Relations at the World Economic Forum

Image: People play hacky sack on Manezhnaya Square near the Kremlin on a sunny afternoon in Moscow March 26, 2008. REUTERS/Denis Sinyakov