Contrary to common perception, mental illness is a problem that is neither new nor unique to the developed world.

What we call schizophrenia and bipolar disorder are among the conditions recognizable in literature stretching back to ancient Greece. Robert Burton’s 1621 work, ‘The Anatomy of Melancholy,’ remains one of our most astute descriptions of depression. Rather than being disorders of the developed world, most of the morbidity from mental illness and 75% of the mortality (measured as suicide) are in low- and middle-income countries.

What is new, and encouraging, is the heightened attention now being given to mental illnesses. Last year at Davos, I helped to launch a new Global Agenda Council on Mental Health, after a study by the World Economic Forum and Harvard School of Public Health projected that the global economic costs of mental illness over the next two decades would be more than the costs of cancer, diabetes, and respiratory ailments put together.

When you can’t get up or make a call

Too many people dismiss mental illnesses as problems of character or lack of will, rather than recognizing these disorders as serious, often fatal, medical disorders. For anyone who has not experienced depression, the most common mental illness, it is important to distinguish the disorder of depression from the sadness, disappointment, or frustration we all experience in our lives. 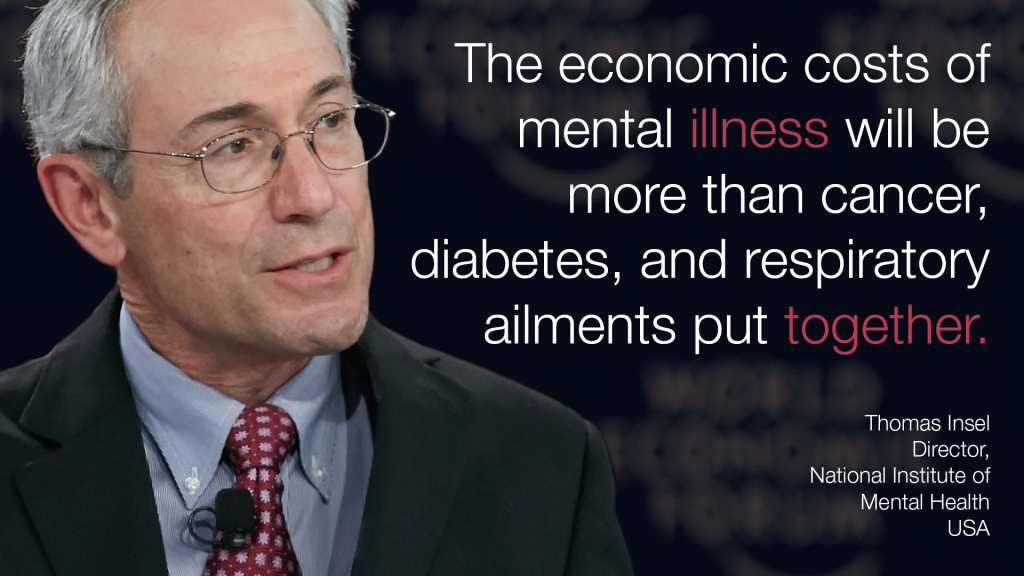 Indeed, when someone develops major depressive disorder, he or she may no longer experience any of these “normal” feelings. William Styron’s 1989 classic, ‘Darkness Visible,’ rightly calls “depression” a wimpy word for a debilitating condition that is marked by hopelessness, helplessness, and dread.

In extreme forms, depression can be so disabling that the thought of getting out of bed or making a phone call becomes overwhelming. While a person with depression might manage to get to work, concentrating or functioning in the workplace becomes intensely challenging. There is growing recognition of this condition, which is known as “presenteeism,” a variation on “absenteeism” – it means that depressed employees are present in body, but absent in mind.

In the United States, approximately 7% of people suffer an episode of depression and about one in five people experience some form of mental illness each year. With prevalence rates so high, the human and economic case for leaders to take mental health more seriously is clearly compelling. What do they need to know?

Beyond increasing risk, mental illnesses have a profound impact on outcome. In fact, following a heart attack, the presence of depression is more important for prognosis than virtually any measure of cardiac function, except for being in frank heart failure. That’s why the expression “no health without mental health” has become an important guide for health care policy.

Third, mental illnesses can be as fatal as physical ones. Suicide causes more deaths than homicide. Around 7% of people with major depressive disorder will take their own lives. Globally, more than 800,000 people kill themselves every year. The number of people scarred by the thought that they could have prevented a loved one’s death is much greater, meaning that every suicide has many victims.

Fourth, effective treatment can be low-cost and low-intensity. Not everybody with a mental illness needs expensive drugs, hospital care, or even direct access to highly trained psychiatrists. In low resource environments, locals or family members can be trained to provide brief, effective psychotherapies that treat moderate forms of depression or anxiety. Even phone- or internet-based therapy can be used to help recovery. While we don’t have the equivalent of a vaccine for measles or the bed net for malaria, there are low-cost, highly effective interventions for most people either at risk for, or already suffering from, a mental illness.

Today’s treatments are not good enough

Finally, this is an area where policy makers need to do more than “build it and they will come.” It is not enough simply to make treatment available. People with psychotic disorders may deny they are ill and those with depression may be too consumed by self-loathing to feel worthy of help. Even in the developed world, it is estimated that only about half of all people with depression are diagnosed and treated. In the developing world, WHO estimates that 85% of people with a mental illness are untreated. We need sensitive ways to identify those at risk and to help those who are most disabled receive treatment.

That said, it should be acknowledged that treatments for mental illness remain far from infallible. Of those who get treated, only about half get the right treatment, and only about half of those remit. The only way we can hope to improve these percentages is by understanding more about how the brain works, in its normal and abnormal modes. Yes, we need to close the gap between what we know and what we do, ensuring that today’s treatments are implemented. But for many people, today’s treatments are not good enough. We need research to develop better treatments for brain disorders generally, and mental illnesses specifically.

Fortunately, the launch of some important initiatives this past year has us moving in this direction. The US National Institutes of Health launched a 10-year BRAIN Initiative, joining similar existing or developing efforts in the EU, Israel, Japan, China, Australia, and Canada. We have also seen unprecedented levels of support from philanthropists – for example, in the US, $650 million was donated recently to the Stanley Center for Psychiatric Research, while a new UK-based charity, MQ, began awarding funds for research on psychological treatments.

Biomedical research gives us hope for cures, for brain disorders as much as any other part of the body. With better policies for providing existing evidence-based treatments in the near-term and research for developing better treatments in the long-term, we can aspire eventually to consign mental illness to the history books.

Author: Thomas Insel is the Director of the National Institute of Mental Health in the United States. He is participating in the World Economic Forum’s Annual Meeting in Davos, 2015.

Image: A view of former the Amazon rainforest that was illegally cleared in Anapu June 2, 2012. REUTERS/Lunae Parracho