How does faith impact business in emerging markets?

Faith is a factor in global economic growth, perhaps more so in particular emerging markets like South-East Asia. Successfully accounting for it requires a corporate culture capable of engaging regional contexts where local elements such as faith can be like the air: unobservable to the outside eye but of tremendous influence and impact.

Global awareness: a world of faith

Whether we like it or not, faith is hugely influential worldwide. Take a look next time at the flag of the country you’re visiting – there’s a 33% chance it has some faith dimension to it. Of the world’s 196 countries, 64 flags have religious symbols in them. Thirty heads of state are required by law to belong to a particular religion.

And that’s just the tip of the iceberg. In 2010, 84% of the world’s population (6.9 billion) self-identified with a particular faith tradition.

Let’s not move past that fact too fast: eight out of every ten people who walk the face of our planet allow for, or believe in, something greater than themselves. As a result, whether as a function of culture or conviction, faith can’t help but influence and impact every sphere of global life, and every sector of a global economy.

For example, two Harvard professors have found that those who believe in hell – that is, people who believe in a God that punishes wrongdoing – are more likely to be competitive, spurring economic growth.

More positively, where people are free to live out their faith, there tends to be less corruption and more economic development. As Brian Grim has argued on this blog, there is a “positive relationship between religious freedom and 10 of the 12 pillars of global competitiveness, as measured by the World Economic Forum’s Global Competiveness Index.”

Economic development requires political stability, which, ideally, presumes a minimal level of social cohesion – where people of different beliefs and backgrounds can live with their deepest differences. As Dennis Hoover and I have written elsewhere, there are positive and negative cycles through which governments help or hinder the free practice of faith (or no faith at all), with profound effects for social well-being, and stability – and therefore the capacity of the state to do business and/or attract foreign direct investment. Knowing whether a government’s policies are helping or hindering social cohesion is essential to developing a risk analysis or an emerging market strategy. 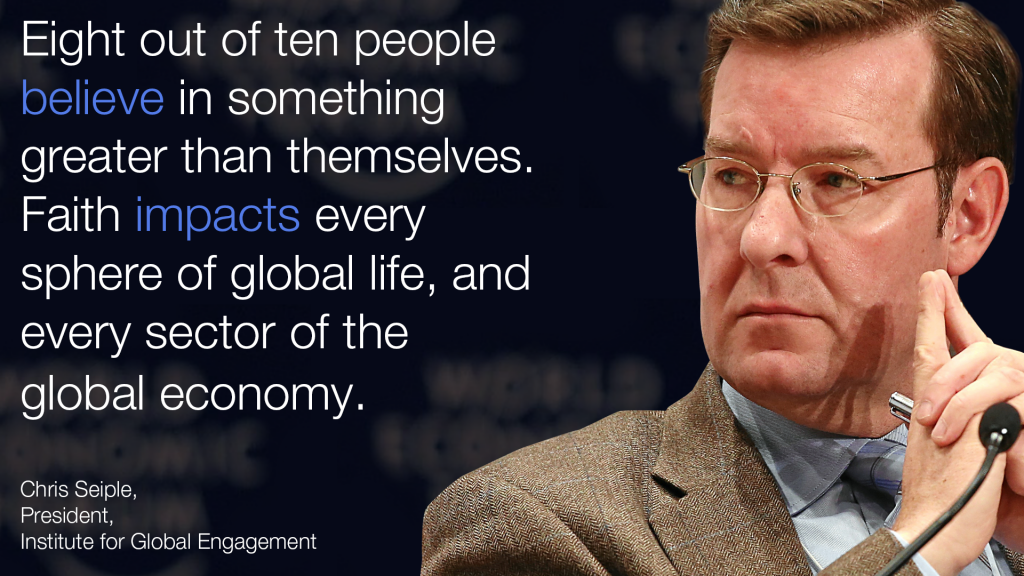 By most accounts, South-East Asia – a place where I have spent considerable time in the past decade, especially in Vietnam and Laos, but also Myanmar and Singapore – is among the top emerging markets.

It also happens that two of ASEAN’s members rank first (Singapore) and third (Vietnam) as the most religiously diverse places in the world. It is also true that many ASEAN countries have clear majority religions. For example, many countries are overwhelmingly Buddhist – Cambodia 96%, Thailand 93%, Myanmar 80%, and Laos 66% – while others are majority Muslim, i.e. Indonesia 87%, Brunei 75% and Malaysia 67%. Meanwhile, the Philippines is 92% Christian.

In other words, the influence of faith in South-East Asia can be like the air: it is so pervasive that it’s invisible, a sometimes unobservable influence that saturates society, consciously and subconsciously, unobservable to the outside eye.

A 2014 McKinsey analysis, however, reports that while ASEAN had the seventh largest GDP in the world in 2013 ($2.3 trillion), projected to become the fourth largest GDP by 2015, the region should be better engaged. “Although ASEAN is becoming more integrated, investors should be aware of local preferences and cultural sensitivities; they cannot rely on a one-size-fits-all strategy across such widely varying markets.”

Indeed, a 2014 Global Intelligence analysis of success factors in ASEAN begins by noting that fewer than one in ten companies engaging ASEAN were satisfied with their emerging market strategy. “The main regrets are not adapting more to local conditions, not entering sooner and not acquiring better market intelligence. Over half say that information on emerging markets is not readily available in their organizations, with three out of four doubting the accuracy and completeness of the information that they do have.”

It is impossible to follow this advice unless assessments and analyses account for the faith factor. As The Economist argued in August, if you want to understand South-East Asia, it is best to have a firm understanding of religion and race (which are often intertwined). And to grasp what governments are doing to help or hinder the social cohesion of a pluralistic society.

It is no accident that the most religiously diverse country in world, Singapore, has led the way in creating and sustaining a positive cycle for mutual respect among faith communities and therefore social cohesion. For example, there is a “safe space” for such conversations through groups like One People (which last month held a conference on inter-racial and inter-religious harmony). Next month, the Singapore Management University will co-host a conference that examines how best to teach mutual respect and mutual reliance among different faith traditions, building social cohesion through resilient individuals and institutions as a result.

In short, just as the people who live in an emerging market region must account for the potential positive or negative cycles of the faith factor, so too should companies and investors.

Self-analysis: what can you and your company do about it?

While faith is obviously not the only factor to be considered in a risk assessment or an emerging market strategy, the above analyses suggest that the local context and conditions must be better accounted for/engaged.

Doing so might result in a couple of possibilities. First, you might outsource the analysis of the faith factor. Second, you might go so far as to designate someone in-house to address these issues in developing your risk assessment and/or emerging market strategy. While potentially helpful, both courses of action assume a company culture and workforce equipped to respond to an analysis and/or recommendations regarding the faith factor.

Only you can judge that, but here are some questions to help analyse your own corporate culture:

Does your risk assessment or emerging market strategy include the faith factor, and if so, how? Take a look. Do your analyses breath the air of the region in which they seek success? If not, depending on the context, you might be irrelevant before you start.

Next, ask yourself, does your corporate culture allow for a “safe space” to talk about religion and politics? Now, most of us have been taught not to talk about such things in polite company. But if it’s hard to discuss such things within the “walls” of your company, how can you expect your people to meaningfully account for, let alone engage, such issues outside your walls? I have found repeatedly that the ability to talk about such issues with local leaders builds authenticity and accelerates practical action.

In the meantime, who are your cat shepherds? Building consensus for a product or activity between and among local government and grassroots leaders is like herding cats. And it only gets harder when the context is complex, saturated with and/or complicated by the faith factor. That said, given that 84% of the world believes in something greater than themselves, you most likely already have people capable of accounting for the faith factor, and engaging with mutual respect…but have they been identified, and are they in the right analysis or engagement positions?

Fourth, have you ever asked your local partner to take you and/or your leadership team on a tour of the country’s sacred places? The accountants might raise their eyebrows, but asking a local partner to share the values of their culture – and perhaps the essence of their identity – shows great respect. Bouncing around in a bus and having meals together as real people, I have found, is also a great way to build relationships. Seeing a country and culture through the eyes of your partner also builds intuition and instinct, even as relationships often reveal a better strategy.

Finally, what type of training might your leadership team and/or company need? At some point, whether you are trying to maximize pre-existing engagement of an emerging market, or seek introduction to a new emerging market, you need home-grown analysts and cat shepherds. Not only will they provide assessments and implement strategies, they will also encourage a corporate culture that is “literate” enough to at least read the positive and negative possibilities of the faith factor in regional contexts.

Such a culture, I would argue, preempts mistakes in religious regions, cuts costs and builds trust in the brand. All of which is good for the company, but also good for the country where you work.

Author: Chris Seiple is President of the Institute for Global Engagement and a member of the Global Agenda Council on the Role of Faith.

Davos 2022: What role will 'ASEAN' play in a shifting geopolitical landscape?

All eyes will be on ASEAN this year as it hosts several global summits, including the G20 in Indonesia. The region has a critical role to play in tackling global problems.