Understanding global risks in our current, increasingly turbulent world is necessary if we are to forge a path towards resilient economic development. We tend to forget, or ignore, that human pressures on the planet have reached levels that may trigger major social-ecological shocks, undermining the gains of the past and our prospects for the future.

Take the climate system. As we meet at the World Economic Forum’s 2015 Annual meeting we are very likely to have reached 450 ppm in concentration of all greenhouse gases. This has a high probability of committing the world to 2 ºC warming, the politically agreed upon planetary climate boundary. But it is important to recognise that 450 ppm also holds a less likely, but significant 1.6 % probability (according to the IPCC 5th assessment) of resulting in 6 ºC warming, which is beyond any doubt a catastrophic outcome for humanity.

This is a risk level we simply would never accept for other sectors in society.

This may seem like a daunting global risk, but it’s the scale of humanity that is truly daunting. We use an area the size of South America for our agriculture and an area the size of Africa for our livestock. For the first time, humanity has reached a point where our pressures on fisheries, forests, coral reefs and other ecosystems may disrupt the entire “Earth system”: all the interacting physical, chemical and biological processes on the planet, ranging from the climate system to all ecosystems. It includes all the natural cycles (water, nitrogen, carbon, phosphorus and other cycles) and all life on Earth, including human societies. All possibilities for future economic growth and development depend on this system.

This is new. It may have been hinted at in the 1970s and 1980s, but the great acceleration in human consumption and production in recent decades indicates that from 1990 onwards we crossed a Rubicon. We tipped from being a relatively small world on a big planet, to a relatively big world on a small planet.

We need to understand the risks we face in order to find solutions. And interestingly, solutions are increasingly available, economically competitive and able to deliver sustainable world development at scale. What is urgently required is a set of priorities to navigate the future and create long-term prosperity. We need a safe operating space for humanity.

Slipping past the tipping points

The planetary boundaries framework identifies the nine key priorities: climate, ozone, land, freshwater, fertilizer use (nitrogen and phosphorus), biodiversity loss, aerosols (small particles in the atmosphere harmful to health and the climate), the release of harmful chemicals and ocean acidification.

Humanity has a new responsibility to become stewards of these nine boundaries, which regulate the stability of the planet. Transgressing these boundaries, now largely quantified, puts societies out of the safe operating space into a danger zone. We may at any point slip past tipping points in the Earth system, beyond which there may be no going back for the foreseeable future.

Sea levels, for example, may start rising inexorably, even if we limit greenhouse gas emissions, because Greenland and the West Antarctic Ice Sheet pass points of no return (In 2014, scientists reported the first indications that this may be happening already). Or, large sections of the Amazon rainforest may die off, irreversibly weakening a key component of the Earth system.

The most recent scientific update of the planetary boundaries shows that humanity has transgressed four boundaries: climate change, nitrogen and phosphorus cycles, land-use change, and loss of biodiversity.

The most profound conclusion is that our current dominant paradigm of “growth without limits” has come to the end of the road. The alternative is not “limits to growth” but rather a transition to a paradigm of “growth within limits”.  For the first time in human history, we can now envisage a world without absolute poverty and hunger, even in a world with 9 to 11 billion citizens. 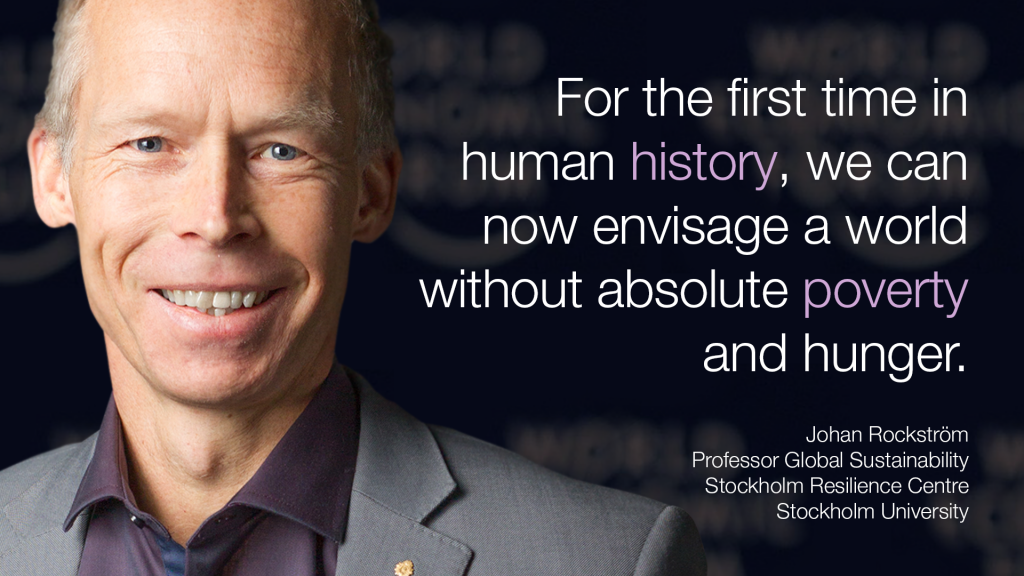 There is room for optimism. Following a worldwide ban to protect the ozone layer, a report earlier this year indicated the layer is stabilizing and it is predicted the ozone hole will eventually recover. The Sustainable Development Goals (SDGs) framework, to be decided upon by the UN General Assembly in September 2015, which will replace the MDGs, set out an ambitious global agenda to eradicate poverty and hunger and safeguard economic development in the world, and to do so within global sustainability goals for climate, oceans, biodiversity and freshwater – the first contours of a new paradigm for world development within a safe operating space on Earth.

There is no evidence to suggest that a global carbon budget to remain within the 2ºC climate boundary, or protection of vital forests and biodiversity will hinder economic development. On the contrary, setting safe guardrails for development, for example, through environmental regulations, has in the past proven effective means of unleashing innovation leading to resource efficiencies and improved wellbeing, through better health and lower costs. Take the example of modern refrigeration after the Montreal protocol forbidding ozone-depleting CFCs, or catalytic converters on cars.

In a world embarking on a Second Machine Age, to paraphrase Erik Brynjolfsson and Andrew McAfee’s excellent book, our conclusion is that creating a safe operating space for development may unleash sustainable economic development rather than hamper it. Peter Diamandis, the creator of the X-prize for new solutions to global challenges, also takes an optimistic stance that abundance for all is possible. We have the real possibility of embarking on a new development paradigm of abundance within planetary boundaries.

To succeed we must embrace and integrate the current contrasts of dire global risks and immense opportunities, and see the virtue in adopting a new development paradigm. This requires admitting that global agreements on the guardrails for world economic development must be set. The immediate priority is to halt biodiversity loss and stay within a 2ºC climate boundary. But this will not impede local innovation and the diversity of pathways to prosperity.

Fundamentally we need a mind-shift that reconnects our development to the biosphere to ensure good and safe lives for all in the future.

Image: The astonishing ecological and genetic variation that we find in the Iguazu Mountains on the border between Brazil and Argentina, is among the richest on Earth. Estimates show that much of the water flowing over Iguazu Falls comes from exhalations of the standing rainforest. When we devastate our forests, we also lose a key source of rainfall and thus help to gradually dry up the rivers. Mattias Klum