Q&amp;A: Cheap oil and the future of energy

The oil price has plummeted, while shale gas has made the US increasingly energy self-sufficient. What does this mean for the world’s shift to renewables, and the role played by fossil fuels in our energy mix? Will nuclear energy disappear because of concerns over the safe storage of nuclear waste?

After over four years as the United States Secretary of Energy, Nobel laureate Steven Chu, Stanford University professor of physics and molecular and cellular physiology, discusses the current energy landscape and the outlook for the future.

During your time at the Department of Energy, the deployment of renewable energy in the US doubled. With fossil fuel prices falling, is that killing the business case for renewables, and if so, what does it mean for investment in renewable energy solutions?

The decline in fossil fuel prices does have some effect, but remember that 78% of the economies of the US have State-mandated renewable portfolio standards. They require that a specified fraction of electricity must come from renewable energy. For example in California the goal is 33% renewable energy by 2020.

Right now renewable electricity is roughly 13% of total electricity generated in the US. Half is hydropower and the other half is mostly wind energy, with some solar, biomass and geothermal. Renewable energy costs have come down significantly. Even if natural gas, which is the cheapest form of electricity generation today, stays at $4 million BTU (British thermal units), wind without subsidy is almost as inexpensive.

Electrical generation in the sunnier parts of the US is also approaching equality with a new natural gas power plant. The cost of wind and solar is anticipated to decline for at least a decade or two. Perhaps in a decade, renewables will be competitive with any new form of energy in many parts of the US.

What do you think is the biggest energy problem today?

It’s a combination of things. As renewable energy and electrical storage become less expensive, one has to design the grid system to take full advantage of lower-cost energy.

As renewable energy becomes an increasingly larger fraction of the total energy, the cost of stand-by electricity and storage becomes part of the cost of renewables. Sometimes, the wind does not blow and the sun does not shine.

There are countries that have about 25% intermittent energy integrated over the year. One of the challenges is how do you go from 25 to 50% and higher. It means you have to balance loads over wider areas, because the larger the area you collect energy, the more you can even things out. But at the 50% level you’ll need energy storage as well.

Germans call it the “Energiewende”, the switch from fossil fuel and nuclear to renewables: Is the world really on this path?

Countries are going to take different paths. I wish that Germany would continue to operate their nuclear reactors for the duration of their useable lifetime to allow for a more orderly progression.

In Germany, about 30% of their electricity comes from renewables – 10% biofuels and the rest wind and solar. Virtually all of the wind is in the northern part of Germany and electricity has to be transported to heavy industrial areas in the southern part, and some people don’t want the transmission lines in their line of sight. Germany has to figure out how to deal with this issue.

China also is moving – it has now set goals to cap carbon emissions and coal use, and be 20% renewable by 2030 or earlier. It is a very good sign when a developing country like China says that clean energy is an important goal, regardless of whether there’s a UN agreement or not. For them to say, “We’re going to go ahead and do this” is a very big deal.

What are the most interesting scientific advances right now that have the potential to transform clean energy?

In the solar photovoltaic field there are new compound materials called perovskites, which have increased efficiency in laboratory tests from 3.8% in 2009 to over 20% by 2014. If we can use these materials in tandem with silicon, photovoltaic generation could increase to produce 50% more energy.

There are also new battery and “super-capacitor” chemistries and structures. A super capacitor can accept and deliver much more power per unit volume than a battery, and a modest-sized super-capacitor will allow full energy recovery during the braking of vehicles. I am particularly excited about nanostructured batteries and graphene-based super-capacitors. Energy efficiency technologies are also improving: cars of equal performance are able to go twice as far on a gallon of gas as automobiles of 40 years ago, and a Boeing 787 uses only 30% of the fuel of a Boing 707 per passenger mile. Efficiency improvements are part of the transformation.

Electric cars are hailed by some as an important contribution to our energy problems – do you agree?

Yes. The cost of electric vehicle batteries has come down to about 40% of what it used to be in 2008. According to the projection of the Tesla Gigafactory, a lithium ion battery factory, electric cars’ battery costs will go down another two-fold from today. Within five years, we may be able to buy a car that goes 200 miles for $25,000. 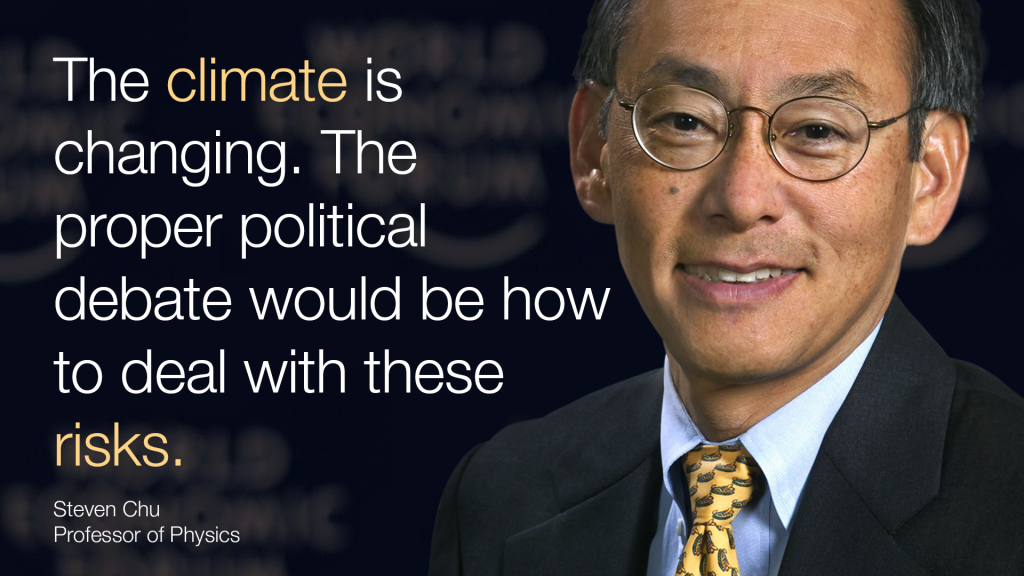 The clean-tech community is split: some believe nuclear has to be a key part of the mix, others think that – with nuclear waste storage still untested – it’s even worse than fossil fuels. What’s your take on this?

I think for the next half century I would like to see nuclear as part of the electricity mix to have a diversified supply of electricity.

Disposing of the waste is an issue because many people do not want it in their backyard. But that’s mostly where it is a political issue rather than a scientific one. There are geological sites that are very stable, and where nuclear waste can be stored safely. For example in the US we have large salt deposits that have been stable (no water intrusion) for millions of years, and would provide safe geological confinement of spent fuel.

And we can’t really abandon fossil fuels before the first half of this century because they are needed for back-up power. We need to invent a method to transform very inexpensive electricity into cost competitive liquid hydrocarbon fuels that can be shipped by tanker and stored around the world. After that, we can begin to wean ourselves from fossil and fission nuclear energy.

Sometimes you can have sets of well-informed people who will have different opinions on how to deal with X, Y or Z. That’s where politics should come in.

For example take climate change. The climate is changing, and there is very strong evidence much of the change is due to humans. While there are large uncertainties as to what will happen in the future, there are huge risks unless we greatly decrease carbon emissions. The proper political debate would be how to deal with these risks, but it makes no sense to say, “Unless science can prove unequivocally that very bad things will happen, we can continue on our present course.” Science cannot predict who will get lung cancer if they smoke. With a half a century of hindsight, we now know that the risk is 25 times greater than non-smokers. Prudent risk management does not use uncertainty as an excuse for inaction, and fire and health insurance make sense. We need leaders who are scientifically well-informed and willing act in the long-term best interests of their countries.

Interview carried out by Katia Moskvitch for the World Economic Forum

Professor Steven Chu is participating in the science programme at Davos 2015.

Image: Wind turbines are pictured in this multiple exposure at the German village of Feldheim February 21, 2013. REUTERS/Tobias Schwarz.