The trouble with two-tier labour markets

Rigid labour markets have long been one of the key bottlenecks for European competitiveness and productivity. In the past decade, governments focused on reducing protection for temporary workers, while leaving largely untouched regulations for permanent employees. These reforms, which bore lower political costs, often created a dual labour market, leaving few good employment opportunities for young outsiders while not fully addressing the initial rigidities. As market duality increases, so does its perceived rigidity among business executives. Though many European countries have struggled to revert this trend and reform their labour markets in depth, Portugal and Greece lead the way in recent positive developments. For example, Portugal implemented deep reforms that reduced employment protection for regular employees and partially bridged the gap with temporary contracts, which reduced the duality of its labour market.

But how are these changes to permanent and temporary contracts perceived in the business community? The World Economic Forum Executive Opinion Survey can be used to benchmark labour markets across countries and monitor how reforming efforts take place and are perceived. For example, following the adoption of reforms in Greece and Portugal, the perceived rigidity of the labour market among executives decreased. 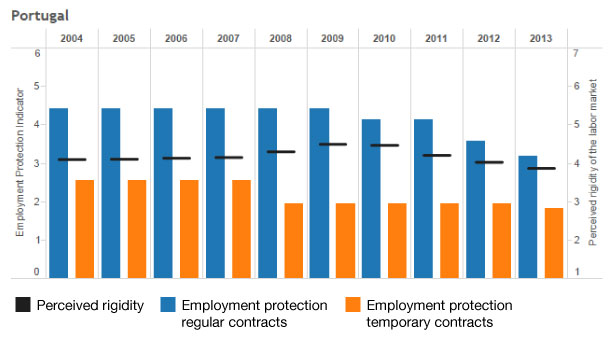 Results like these demonstrate some alignment between the perception of business executives and economic literature on the consequences of two-tier labour markets on employment and long-term productivity and competitiveness. Boeri and Garibaldi (2007) note that countries where two-tier labour markets were introduced experienced a short-term increase in employment (“honeymoon” job creating effect), but a decrease in overall productivity that would lead to a reduction of employment in the longer term.

If we extend this analysis to other European and non-European countries, results seem to confirm the hypothesis that business executives do not like two-tier labour markets. For example, reforms in Germany significantly increased the flexibility of fixed-end contracts (leaving untouched regulation of permanent jobs), which only marginally improved the efficiency of the German labour market. Firms in Germany continue to report rigidities as the reforms have created a dual labour market (Germany has some of the weakest protections among OECD countries for temporary contracts, and some of the highest for regular jobs).

Examples such as Portugal and Greece suggest that eliminating two-tier labour markets by reforming the protection of permanent employees might be more effective and better welcomed by the business community than further increasing the use and flexibility of temporary employment.

Over the last two decades, most governments have responded to the need for more flexibility while at the same time trying to minimize the political cost of reforms; they have reduced the constraints on temporary contracts, while leaving almost unchanged the protection of permanent employees (as depicted in the below graph). In some cases, these reforms have created a two-tiered labour market, which has negative implications for long-term competitiveness and productivity. The results of the World Economic Forum Executive Opinion Survey suggest that two-tier labor markets don’t translate into the higher flexibility perceived by European executives. This might be useful to keep in mind for governments in Europe: reforming the protection of permanent employees might be more effective and better welcomed by the business community than further increasing the use and flexibility of temporary employment.