Leaders often talk about the application of sound business practices to universities and other public services. I want to turn the conversation on its head and suggest that a scientific mindset can inform and benefit the decision-making process outside of the laboratory. Adopting the mindset of a scientist can help all of us approach a changing world.

What skills and mindset will our leaders, workforces, students and young people need to tackle the problems of this century? Ubiquitous information, complexity and new technologies have challenged traditional approaches to solving problems. The internet and communication technologies have created new sources of information and have made that information more accessible. But they have also forced us to think more deeply about what information can be trusted as a basis for decision-making. Our attempts to follow logical processes are constantly challenged by new and disruptive influences.

One area of promise has been the increasing collaboration between the business and academic communities. This collaboration has fostered research, accelerated the movement of ideas and insights from the lab to the marketplace, and benefited society as a whole. In this process, businesses and universities have learned and gained greater respect for one another.

What does a scientist do?

While most agree that the outputs of science are beneficial to society, a sizeable part of the general public do not know what scientists do and scientists are often stereotyped as apt to be odd and peculiar. The science community is likely in part responsible for these misconceptions, with Ipsos MORI reporting that 40% of the UK public feel that scientists are poor communicators and appear secretive.

Modern scientific practice in reality is highly collaborative. For example, Imperial College London’s chemistry department has joint projects with almost every other academic department at the university.

Scientists are, even when pursuing discovery- or curiosity-driven research, keenly aware of potential future applications of research and how it will impact society. The scientists who have worked tirelessly for decades at CERN to see and measure the fundamental particles of the universe are, for example, extremely excited about the way technology from particle accelerators creates new medical diagnostics such as PET imaging scanners. They are also motivated by the way the hunt for the Higgs boson has stirred public interest in science and raised the engagement of the world community.

Science is also a profession that embraces change. We are seeing the epithet “scientist” applied to new disciplines outside of the conventional laboratory, such as the data scientist. While there is no strict definition, data scientists could be considered scientists because of their ability to go beyond analysis and programming and show a detailed understanding of problems and contexts. New multidisciplinary scientists are emerging, such as bioengineers and synthetic biologists, who combine scientific knowledge and techniques with engineering and medical knowledge.

A changing profession requires a broad and diverse range of skills. The UK Science Council has developed competencies for their Chartered Scientist status that emphasise teamwork and creativity, in addition to the traditional skills in analysis and reasoning. The Science Council also identified 10 types of scientist based on skills rather than subject disciplines, including the entrepreneurial scientist, business scientist and policy scientist.

I therefore believe scientists have skills and ways of working that are relevant and transferable to problems outside of science. Other commentators agree. For example, Sir John Beddington, then the UK government’s chief scientific adviser, argued in 2013 that we should “put scientists and engineers at the heart of government” because of their range of skills and evidence-based culture. 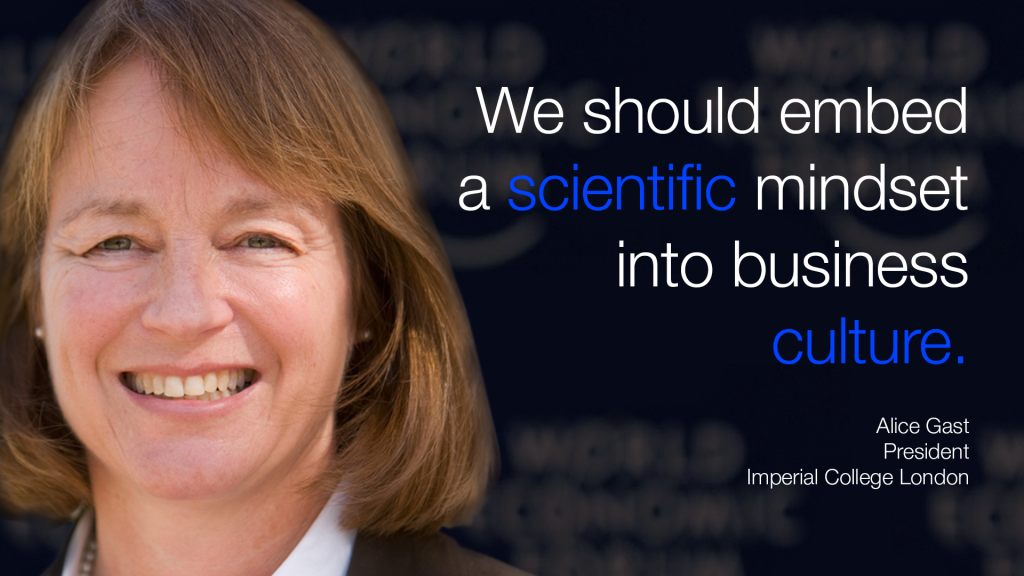 We should embed a scientific mindset into business culture. Here are three attributes contributing to the thinking of a scientist, and ways they might be applied to wider contexts.

1. Sceptical curiosity
Scientists need to be sceptical. Like their colleagues in business and industry, they also must innovate. As they innovate, scientists strike a careful balance between curiosity, intuition and scepticism. Their work is driven forwards by curiosity, and it is guided by intuition and prior knowledge, but techniques such as external and internal peer reviews and randomized control trials are also embedded in their way of thinking to avoid blind optimism and bias.

2. Collaborative competitiveness
The best scientists readily compete and collaborate with one another. Someone in a different field or organization could have the key to unlocking the problem they are working on. When the problems get tough, scientists want to build the best team, even if the partner is a fierce competitor. At one time, collaboration and data sharing were the purview of “big science”, such as the scientists at CERN. Now we see new collaborations all the time when it is opportune to bring together diverse teams such as at the Crick Institute or in complex areas such as climate change or public health for an ageing population.

How to apply it: Look at those problems and opportunities in your business or organization that cannot be solved in isolation. Areas such as cybersecurity, global political and economic forces, or significant technological requirements, all benefit from collaboration across the industry and across sectors. When corporations come together, as they do at Davos, they can make important things happen. Bringing together industry, government and higher education can be even more powerful. Collaborate like a scientist.

3. Confidence in the face of uncertainty and the unknown
The scientist’s business is the unknown. Where something is unknown, it is an opportunity to be pursued rather than avoided. This requires the ability to deal with ambiguity and uncertainty, which most people find difficult. In experiments, a lack of correlation moves science forward as much as a positive correlation. No information is ever complete. Scientists are comfortable with moving forward purposefully when faced with incomplete or problematic data sets. For example, Michael Stumpf, a professor of theoretical systems biology at Imperial, has created a methodology to utilize multiple mathematical models to reduce the chances of drawing a wrong conclusion as a result of simplifications and assumptions. Even the biggest problems, such as the spread of malaria or the age of the universe, can be approached in a systematic and rational way.

How to apply it: Break down problems into smaller hypotheses to be tested. Evaluate probabilities and the interrelation between factors affecting probability and move forward armed with that imperfect knowledge. Build a team that can deal with uncertainty and ambiguity by pooling their understanding and gaining confidence.

We at Imperial have learned much from our relationships with business leaders. Sound business practices are necessary to keeping a university strong. At the same time, incorporating sound scientific thinking into business decisions can help keep businesses strong by thinking more boldly and creatively.

I am inspired by the scientific mindset at institutions such as Imperial. I hope that at this year’s World Economic Forum Annual Meeting I will have the opportunity to ask you for your views on the discoveries and skills society will need for the next century, and where we might look for ways forward.

Image: Researchers work in the laboratory Biotis at INSERM (the National Institute for Health and Medical Research) in Pessac near Bordeaux October 29, 2014. REUTERS/Regis Duvignau

Up to 1.8 million children had no computer or tablet at home at the start of the pandemic, placing them at an educational disadvantage for online learning.

To close the skills gap, we need lifelong learning, redeployment and re-employment of people, funding, and the ability to anticipate what skills are needed.

Davos Agenda: What you need to know about technology

How the pandemic could change how we teach our children

A silent and unequal education crisis. And the seeds for its solution.