Is this the biggest trend in technology today?

Technology has flourished as an industry by creating continuous substitutes for human processes and, lately, even for itself.

However, I believe that the biggest trend in technology today is cross-pollination, or the transformation of traditional industries by the convergence and application of technology to find real solutions to customer problems. It is the use of technology to solve long-standing problems in a fundamentally different way.

Historically, increasing compute power, storage, bandwidth, and the Internet itself, have helped us automate and connect ever faster, displacing many manual, human processes. One example of this is the evolution of communications, where phones and email cut down on in-person meetings and letters, before they in turn were disrupted by mobile, video conferencing and mobile messaging. Another example from retail was the displacement of bricks and mortar stores by ecommerce sites like Amazon and eBay.

When digital gets physical

However, as I noted in Online vs In Store, it is not necessarily a digital disruptor take-all proposition. Success may lie in a hybrid approach. Just as Wal-Mart and Macy’s scramble to gain relevance online, Amazon and Google are busy connecting physical groceries and drugstores to users through innovative but very real-world logistics.

If in recent years we have seen the “star wars” of digital disruption – with companies like Twitter, Uber, AirBnB and Gilt upsetting the incumbents – the future will see traditional “empires strike back”, as multinationals better learn how to use technology to reinvent themselves and potentially regain the competitive advantage.

Companies like Disney, Nike, and Tesco, who have vast resources, enormous scale, powerful brands and operational discipline are leapfrogging tech upstarts by adopting and integrating technology in their experiences and workflows. They’re able to show that building a long-term, sustainable business model takes more than hot valuations and high priced engineering talent. And “first-generation” Internet giants like Google and Amazon are trying to show that they can disrupt themselves as much as they disrupted their competitors a decade ago. The winners of the future will be “master orchestrators” able to achieve huge scale as they capitalize on technology to rapidly advance and innovate with their systems and strategies.

I have observed that the cross-pollination of technology into other industries tends to have four components:

Cross-pollination tends to be driven by individual leaders, at first, who have the ability to do the following:

The very existence of segments like HealthTech, Retail Tech, FashTech, FinTech, AgTech, and FoodTech say a lot about cross-pollination. In fact, when asked which industry would be most impacted by technology in the next three years, “global technology leaders” surveyed by KPMG pointed to Automotives, Consumer industries and Healthcare pretty quickly after Technology itself. 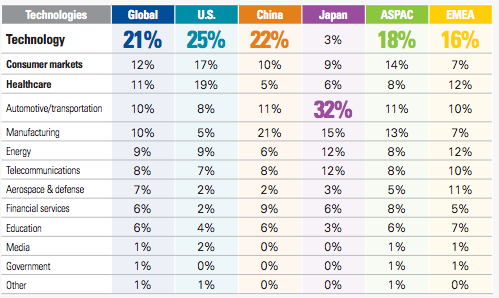 The flow of private equity investment dollars also show moves into these segments at a faster growth rate than traditional tech. While the data is not all in, expect to see 2014 follow the same trend as 2013 in a higher rate of growth of funding for tech businesses classified in “other” sectors … 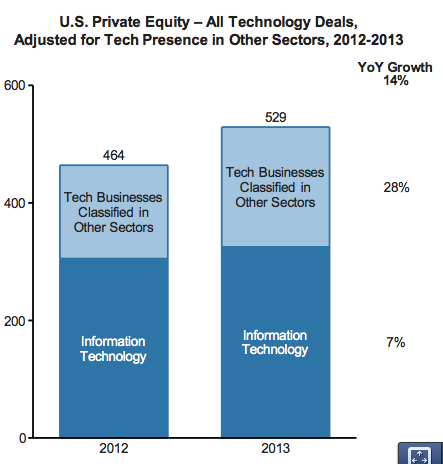 … as well as bigger investment flows into vertical software sectors, traditionally thought to be unattractive for venture investment:

Finally, as we look to today’s top businesspeople and the companies they are leading, we see many of the success stories coming from the realization that technology is the best source of growth and competitive advantage for every sector in the modern era. For example, Fortune’s 2014 Businesspeople of the Year is full of individuals who achieved their ranking in some part by cross-pollinating technology into another industry.

The fact is, we are entering a truly magical era, where “technology” changes are based not on just technical iteration and advances, but rather on the true marriage of engineering excellence with business model innovation and real life applications. This will go beyond doing things faster. People will be able to think differently and more creatively. They will solve bigger problems that encompass business, political and social change. With the widespread accessibility of technology innovation and talent, the quest for relevance, let alone growth, is limited now only by an individual’s or enterprise’s creativity and openness to change. We should all seize this opportunity to transform, evolve and redefine the way we live.

Image: A museum staff member takes photos of an artwork named “3D Display Cube” by James Clar during a media preview at the National Museum of Emerging Science and Innovation (Miraikan) in Tokyo April 23, 2008. REUTERS/Toru Hanai