Recyclable thermoset plastics are one of 10 emerging technologies of 2015 highlighted by the World Economic Forum’s Meta-Council on Emerging Technologies.

Plastics are divided into thermoplastics and thermoset plastics. The former can be heated and shaped many times, and are ubiquitous in the modern world, comprising everything from children’s toys to lavatory seats. Because they can be melted down and reshaped, thermoplastics are generally recyclable. Thermoset plastics however can only be heated and shaped once, after which molecular changes mean that they are “cured”, retaining their shape and strength even when subject to intense heat and pressure.

Due to this durability, thermoset plastics are a vital part of our modern world, and are used in everything from mobile phones and circuit boards to the aerospace industry. But the same characteristics that have made them essential in modern manufacturing also make them impossible to recycle. As a result, most thermoset polymers end up as landfill. Given the ultimate objective of sustainability, there has long been a pressing need for recyclability in thermoset plastics.

In 2014 critical advances were made in this area, with the publication of a landmark paper in the journal Science announcing the discovery of new classes of thermosetting polymers that are recyclable. Called poly(hexahydrotriazine)s, or PHTs, these can be dissolved in strong acid, breaking apart the polymer chains into component monomers that can then be reassembled into new products. Like traditional unrecyclable thermosets, these new structures are rigid, resistant to heat and tough, with the same potential applications as their unrecyclable forerunners. 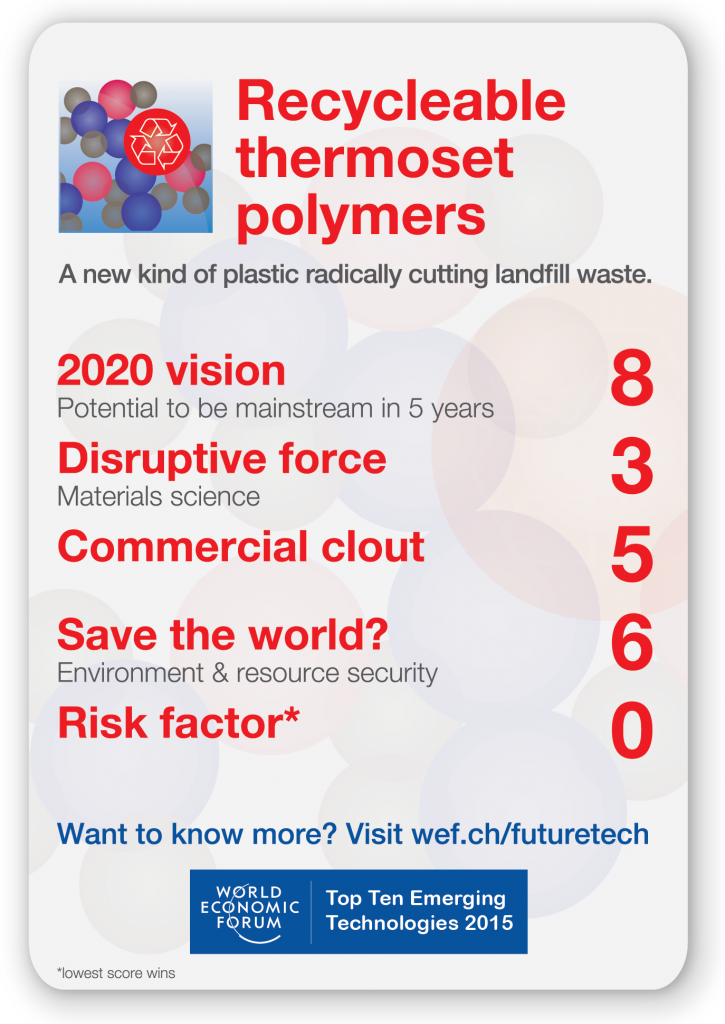 Although no recycling is 100% efficient, this innovation – if widely deployed – should speed up the move towards a circular economy with a big reduction in landfill waste from plastics. We expect recyclable thermoset polymers to replace unrecyclable thermosets within five years, and to be ubiquitous in newly manufactured goods by 2025.

Image: A truck loaded with waste is seen at the Malagrotta landfill near Rome. REUTERS/Alessandro Bianchi

More on Circular Economy View all

5 ways the circular economy will transform your fashion habits

Clothing production has doubled in the last 15 years to meet the demands of fast fashion. What changes will the circular economy bring to our wardrobes?

We know plastic pollution is bad – but how exactly is it linked to climate change?