Emerging Tech 2015: Computers that learn on the job

Emergent artificial intelligence is one of 10 emerging technologies of 2015 highlighted by the World Economic Forum’s Meta-Council on Emerging Technologies.

Artificial intelligence (AI) is, in simple terms, the science of doing by computer the things that people can do. Over recent years, AI has advanced significantly: most of us now use smartphones that can recognize human speech, or have travelled through an airport immigration queue using image-recognition technology. Self-driving cars and automated flying drones are now in the testing stage before anticipated widespread use, while for certain learning and memory tasks, machines now outperform humans. Watson, an artificially intelligent computer system, beat the best human candidates at the quiz game Jeopardy.

Artificial intelligence, in contrast to normal hardware and software, enables a machine to perceive and respond to its changing environment. Emergent AI takes this a step further, with progress arising from machines that learn automatically by assimilating large volumes of information. An example is NELL, the Never-Ending Language Learning project from Carnegie Mellon University, a computer system that not only reads facts by crawling through hundreds of millions of web pages, but attempts to improve its reading and understanding competence in the process in order to perform better in the future.

Like next-generation robotics, improved AI will lead to significant productivity advances as machines take over – and even perform better – at certain tasks than humans. There is substantial evidence that self-driving cars will reduce collisions, and resulting deaths and injuries, from road transport, as machines avoid human errors, lapses in concentration and defects in sight, among other problems. Intelligent machines, having faster access to a much larger store of information, and able to respond without human emotional biases, might also perform better than medical professionals in diagnosing diseases. The Watson system is now being deployed in oncology to assist in diagnosis and personalized, evidence-based treatment options for cancer patients. 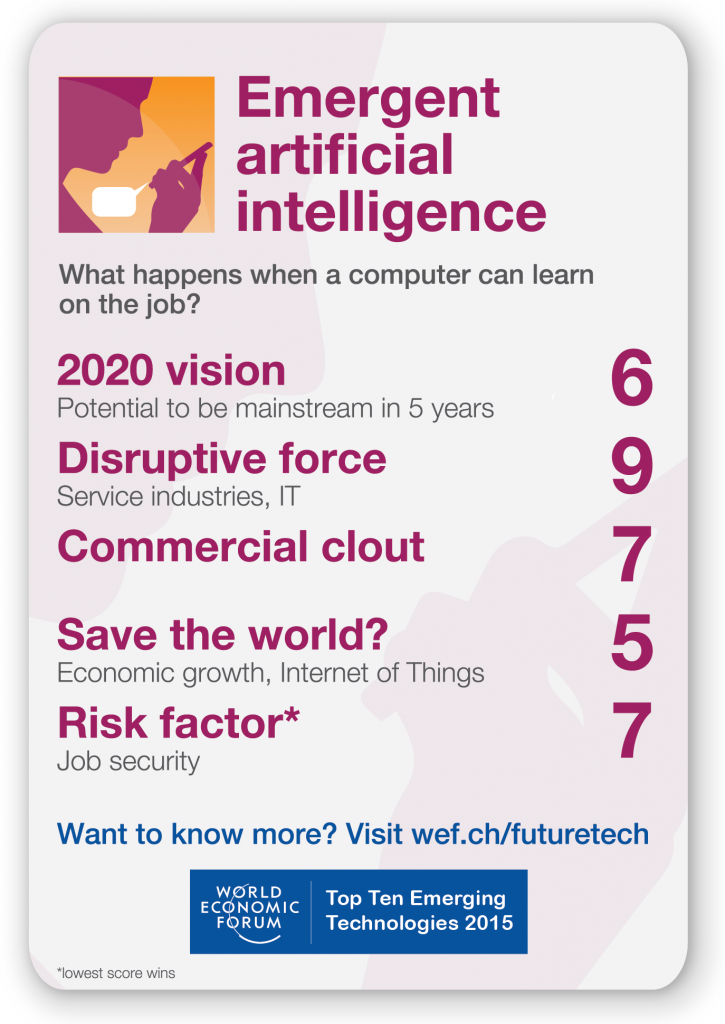 Long the stuff of dystopian sci-fi nightmares, AI clearly comes with risks – the most obvious being that super-intelligent machines might one day overcome and enslave humans. This risk, while still decades away, is taken increasingly seriously by experts, many of whom signed an open letter coordinated by the Future of Life Institute in January 2015 to direct the future of AI away from potential pitfalls. More prosaically, economic changes prompted by intelligent computers replacing human workers may exacerbate social inequalities and threaten existing jobs. For example, automated drones may replace most human delivery drivers, and self-driven short-hire vehicles could make taxis increasingly redundant.

On the other hand, emergent AI may make attributes that are still exclusively human – creativity, emotions, interpersonal relationships – more clearly valued. As machines grow in human intelligence, this technology will increasingly challenge our view of what it means to be human, as well as the risks and benefits posed by the rapidly closing gap between man and machine.

Image: Visitors and staff work on computers next to humanoid robots “Nao” at the workshop of Aldebaran Robotics company during its opening week in Issy-Les-Moulineaux near Paris July 2, 2014. REUTERS/Philippe Wojazer

This world map depicts population density by latitude. It is seen that the population becomes more concentrated closer to the equator.

There is great value in giving feedback, and research shows that people want to hear it