Fuel cell vehicles are one of 10 emerging technologies of 2015 highlighted by the World Economic Forum’s Meta-Council on Emerging Technologies.

“Fuel cell” vehicles have been long promised, as they potentially offer several major advantages over electric and hydrocarbon-powered vehicles. However, the technology has only now begun to reach the stage where automotive companies are planning to launch them for consumers. Initial prices are likely to be in the range of $70,000, but should come down significantly as volumes increase within the next couple of years.

Unlike batteries, which must be charged from an external source, fuel cells generate electricity directly, using fuels such as hydrogen or natural gas. In practice, fuel cells and batteries are combined, with the fuel cell generating electricity and the batteries storing this energy until demanded by the motors that drive the vehicle. Fuel cell vehicles are therefore hybrids, and will likely also deploy regenerative braking – a key capability for maximizing efficiency and range.

Unlike battery-powered electric vehicles, fuel cell vehicles behave as any conventionally fuelled vehicle. With a long cruising range – up to 650 km per tank (the fuel is usually compressed hydrogen gas) – a hydrogen fuel refill only takes about three minutes. Hydrogen is clean-burning, producing only water vapour as waste, so fuel cell vehicles burning hydrogen will be zero-emission, an important factor given the need to reduce air pollution. 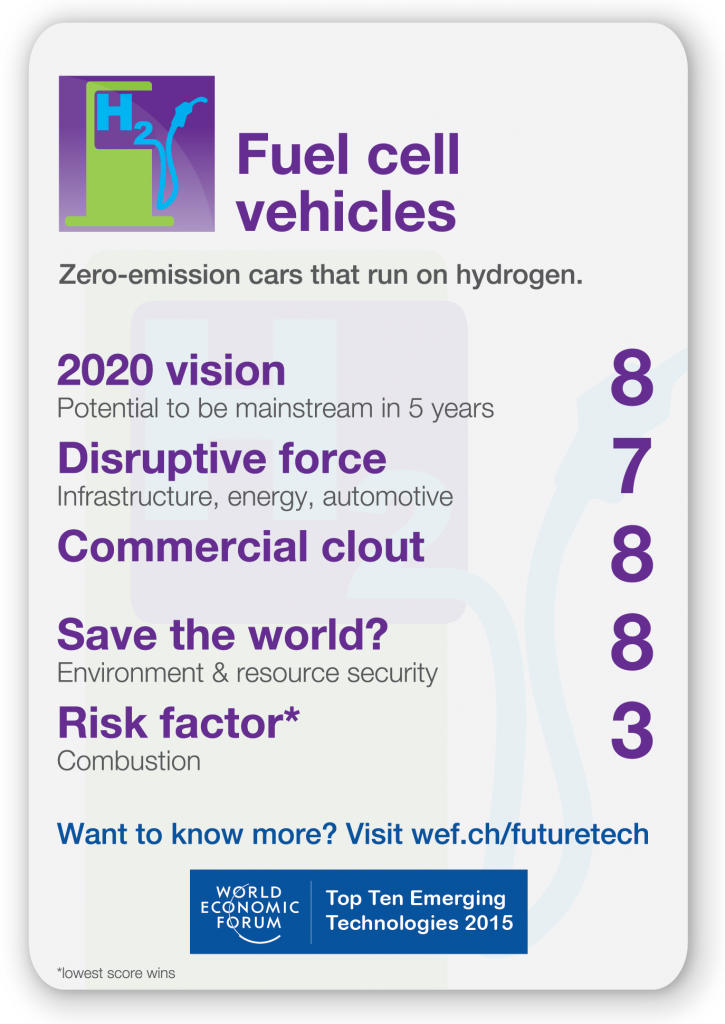 There are a number of ways to produce hydrogen without generating carbon emissions. Most obviously, renewable sources of electricity from wind and solar sources can be used to electrolyse water – though the overall energy efficiency of this process is likely to be quite low. Hydrogen can also be split from water in high-temperature nuclear reactors or generated from fossil fuels such as coal or natural gas, with the resulting CO2 captured and sequestered rather than released into the atmosphere.

As well as the production of cheap hydrogen on a large scale, a significant challenge is the lack of a hydrogen distribution infrastructure that would be needed to parallel and eventually replace petrol and diesel filling stations. Long distance transport of hydrogen, even in a compressed state, is not considered economically feasible today. However, innovative hydrogen storage techniques, such as organic liquid carriers that do not require high-pressure storage, will soon lower the cost of long-distance transport and ease the risks associated with gas storage and inadvertent release.

Mass-market fuel cell vehicles are an attractive prospect, because they will offer the range and fuelling convenience of today’s diesel and petrol-powered vehicles while providing the benefits of sustainability in personal transportation. Achieving these benefits will, however, require the reliable and economical production of hydrogen from entirely low-carbon sources, and its distribution to a growing fleet of vehicles (expected to number in the many millions within a decade).

Discover the other emerging technologies on the 2015 list:
Sense and avoid drones
Distributed manufacturing
Digital genome
Additive manufacturing
Computer chips that mimic the human brain
Computers that learn on the job
Precise genetic engineering
A new kind of plastic to cut landfill waste
Next generation robotics