One of the big questions to emerge from the global financial crisis, especially in the euro area, is how to raise a country’s potential growth while restoring healthy public finances. For example, the euro area— despite some favorable news recently — faces marked-down growth prospects alongside high levels of public debt. The combination of high debt and tepid potential growth underscores the importance of improving prospects for sustained growth and safe and resilient public finances. A fundamental question then arises: what is the relation between fiscal consolidation and structural reform?

Clearly, fiscal structural reform can help build sound, strong, resilient and growth-friendly fiscal institutions. One example is provided by letting automatic stabilizers – the fiscal automatic shock absorbers – work in both directions to help smooth fluctuations in economic activity. Increased stability, in turn, has a surprisingly strong impact on economic growth (look for our spring edition of the IMF’s Fiscal Monitor, to be issued on April 8 for more details).  But, more generally, fiscal frameworks are a crucial part of macroeconomic risk management, as discussed in my recent blog on “Dams and Dikes for Public Finances”. Prudent conduct of fiscal policy is a cornerstone for stable and sustainable growth.

Labor market reform may use fiscal instruments. Reducing labor taxes and social security contributions can positively impact employment and economic activity. While there are direct budgetary costs, these can be reduced by targeting reductions to specific groups. Figure 1 illustrates the effectiveness of targeted employer social security contributions—for the elderly in the case of Germany and youth in the case of Sweden—as employment growth in the targeted segments outpaced that of the broader population. 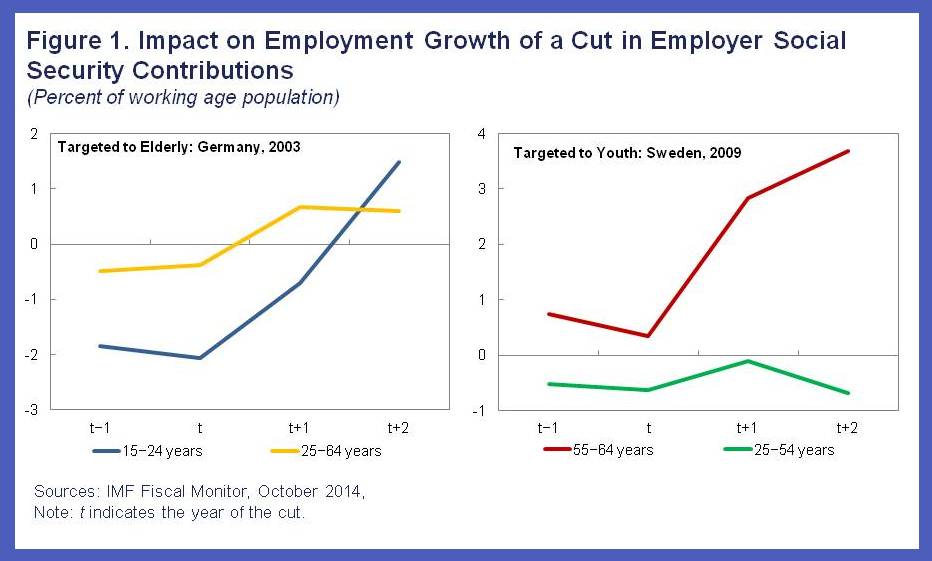 Fiscal policy can also be used to compensate groups adversely affected by the proposed structural reform. A typical example occurs when changes in employment protection are bundled together with measures that benefit employees. Figure 2 shows that in the 1990s, Sweden and Finland enacted labor tax cuts in parallel with reductions in employment protection.

Fiscal policy can also offset possible detrimental economic effects of reform in the short term, which buys time for the long-term benefits to materialize.

For example, short-run demand support can be achieved through productive public investment, the conditions for which will be provided in the forthcoming IMF policy paper on “Making Public Investment More Efficient.” This is especially appropriate when interest rates are close to zero (often referred to as the zero lower bound), when fiscal multipliers are larger, and the potential negative impacts of some reforms may also be more pronounced.  Figure 3 presents the implications of a reduction in employment protection legislation, which is particularly costly in terms of output losses. The simulations suggest that fiscal policy can offset the potential short-term economic costs of reform, although it would also increase public debt slightly in the near term.

But how to assess the macroeconomic support role of fiscal policy for structural reform? A number of principles can be advanced.

First, fiscal policy must ensure debt sustainability and market confidence. Second, there must be a credible commitment to see the structural reform through to fruition. Third, there needs to be a good estimate of the costs and benefits of the reform and how they will materialize over time. Fourth, an overall assessment of the macroeconomic situation and prospects is required.

These are clearly difficult and complex issues that we will continue to explore in order to fully take advantage of the potential complementarities between fiscal and structural policies.

Author: Vitor Gaspar is Director of the Fiscal Affairs Department of the International Monetary Fund.

Growing scepticism about long-term oil demand in a post-coronavirus world is putting pressure on big oil companies to change how they do business.

Economic predictions for the COVID-19 recession are bleak. Here's how oil, consumer spending, GDP and economic output are set to change and how 2020 compares to past recessions.