How did the ECB save the Eurozone without spending a single Euro?

The Eurozone was never as close to ‘doomsday’  as in the summer of 2012. The debt spreads of the Eurozone periphery countries surged and the epicentre of the crisis shifted from Greece and Portugal to larger economies such as Spain and Italy. On 26 July  2012 the ECB President Mario Draghi eventually announced that the Bank would do “whatever it takes (within [its] mandate)” to save the euro. Shortly after, on 2 August 2012 the ECB declared its intention to perform outright government bond purchases. On 6 September 2012 the Bank finally formalised its lender of last resort (LOLR) role via the Outright Money Transaction (OMT) programme albeit only for those Eurozone countries who would be eligible for European Stability Mechanism funding; that is, only for solvent but illiquid countries (Wolff 2014). With hindsight, it is now clear that the OMT has been one of the most effective programmes in the recent history of central banking, bringing down the credit spreads across the Eurozone without spending a single euro under its name.

Nonetheless, there is still an ongoing case at the hands of the European Court of Justice against the OMT programme after the German Constitutional Court judged it to be incompatible with the EU law in January 2014.  The German Court’s decision appears to be based on the implicit assumption that the dramatic surges in credit risk in the Euro region were exclusively a consequence of deteriorating macroeconomic fundamentals; and thus, it was not a ‘business’ of the ECB to interfere with this self-evident relationship between fundamentals and sovereign debt spreads (see De Grauwe 2014, Giavazzi et al. 2013). In other words, it was implicitly assumed that a given state of economic conditions across Eurozone countries would always correspond to a single equilibrium interest rate in the bond markets.  Under this premise, every Eurozone sovereign would “deserve” the interest rate it pays on its bonds, which would be utterly tied to its economic fundamentals. In plain words, the dramatic increase in default risk in many Eurozone countries had nothing to do with market panic or financial speculation; it was deemed by the German sceptics as the natural reflection of economic mismanagement in these countries, and hence should be corrected by better management (i.e. austerity and structural reforms). Sinners have to pay! Therefore, according to this logic, there is no need for the ECB to interfere as a LOLR in debt markets since efficient financial markets can clearly differentiate between illiquid and insolvent borrowers and provide the necessary liquidity to the former, or can’t they? Such a fundamental view is difficult to reconcile with today’s financial world where, for instance, ’bank runs’ driven by depositor panic are seen as a potential threat to banking systems worldwide and central banks are more than welcome to act as LOLR for banks. If bank runs are possible, why is it so difficult to accept the possibility of sovereign debt runs in a currency union?

As Angeletos and Werning (2006) put it in the introduction of their paper, “It is a love-hate relationship. Economists are at once fascinated and uncomfortable with multiple-equilibria”. We observe a single price in markets at any given time and are more inclined to assume that this reflects a single outcome which is uniquely decided by a certain set of determinants. This makes life easy for us economists as we now feel more confident about our own ability of explaining things and predicting future outcomes. If two or more distinct events were possible under the same set of circumstances, it would seriously hamper the explanatory and predictive power of our profession; not to mention our self-respect.

Status quo in mainstream economics may change though, albeit slowly. Few would remember how elegantly Paul Krugman (1996) defended the first-generation models of currency crises which at the time put all the blame on the governments and on mismanagement of economic indicators. A few years later, he would come to terms with the second-generation models of currency crises, due to Obstfeld (1996), which rationalised the possibility that for countries with an intermediate set of fundamentals, bad market expectations might validate themselves by raising interest rates and forcing an otherwise-solvent government to leave its currency peg. Krugman’s eventual confession was also elegant: “I was wrong, Maury Obstfeld was right” (1999).

In a recent empirical paper, we revisit a similar debate in the context of recent Eurozone debt crises by examining whether Paul De Grauwe was right (Saka et al. 2015).1 As well known by the readers of VoxEU, De Grauwe is the first economist to contend that the same arguments that rationalise self-fulfilling debt runs as serious threats to developing countries – à la Calvo (1988) – apply to country members of a currency union as well. De Grauwe reasons that the loss of power in printing the currency in which individual states borrow would bring fragility to Eurozone members and render them vulnerable to the sudden switches in market sentiments. But such fragility could be prevented if the ECB takes on the LOLR role (De Grauwe 2011). Thus the OMT programme, even under strict conditions that makes it applicable only to illiquid but solvent countries, ought to be able to avert the self-fulfilling panic even without actually interfering in the market (Giavazzi et al. 2013). This is indeed the case as borne out by the calming-down effect of the policy even though it was never exercised.

It is clear that the change in the ECB’s policy stance first signalled by Draghi’s ’whatever-it-takes’ speech represents the bank’s LOLR role in Eurozone debt markets. In our paper, we examine the debt markets’ behaviour around this date to gauge whether previously-detected contagion in the region had a self-fulfilling component. If the contagion was only due to fundamentals and solvency concerns, one would not expect the OMT to halt it.2

To sterilise the impact of the ECB’s policy change, we analyse the daily credit default swap (CDS) spreads of 10 Eurozone countries over two one-year windows around the implicit OMT announcement. Through a principal component analysis, we show that commonality in Eurozone spreads significantly increased post-announcement while there seemed to be additional factors affecting the sovereign spreads in a heterogeneous way before the policy. A pure fundamentalist interpretation of these findings would be that markets perceived the OMT as a debt guarantee scheme and hence, the commonality in spreads might have increased since Eurozone members now shared responsibility for each other’s debt through the ECB. If this were true, the OMT must have distorted the relation between debt spreads and fundamentals by inflating spreads in ’virtuous’ countries with good fundamentals and deflating them in the ’sinner’ countries with bad fundamentals. To assess this, we regress the quarterly CDS spreads of Euro members against key macroeconomic indicators in the credit risk literature.

Surprisingly, Figure 1 illustrates in its upper panel that sovereign spreads that were most out of sync with fundamentals belonged only to the pre-announcement quarters and only to periphery countries. Even after dropping the bailed-out countries assuming that their spreads may have lost connection with fundamentals due to their loss of market access, we still get the same results (lower panel in Figure 1) but this time only for Spain and Italy before the OMT policy. It seems that, before the ECB assumed a LOLR position, these countries’ spreads were pushed above the levels rationalised by their fundamentals. 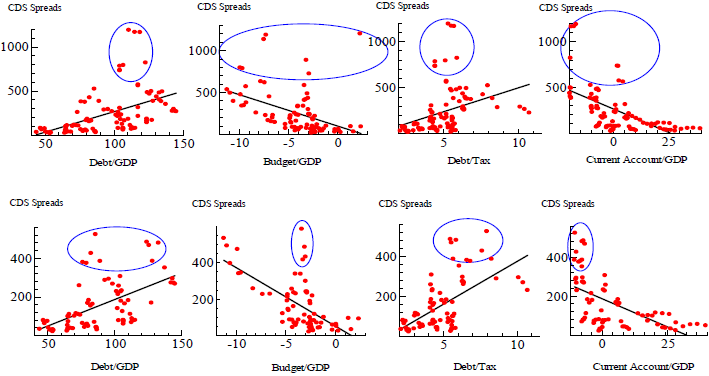 Note: The four graphs in the upper panel are based on pooled quarterly observations for 10 Eurozone countries (Austria, Belgium, Finland, France, Germany, Ireland, Italy, the Netherlands, Portugal and Spain) and the ones in the lower panel are for the same set of countries excluding Ireland and Portugal. The Y-axis represents the quarterly CDS spreads and the X-axis represents the corresponding macroeconomic indicators of these countries over the two-year period from mid-2011 to mid-2013.
Source: Saka et al. (2015); authors’ calculations based on data from Datastream, Oxford Economics, World Development Indicators (World Bank) and OECD.

We also check the explanatory power of these macro indicators on CDS spreads in two separate periods. Our results show that fundamentals matter in explaining sovereign CDS spreads in both windows but they become much more influential after the OMT policy. This does not support the view that debt spreads had already been well-aligned with fundamentals and the OMT (misconceived as a blanket guarantee scheme) distorted the relationship.

Our paper goes on to investigate the presence of various versions of seemingly-non-fundamental type of contagion links across Eurozone and stand-alone European countries which print their own currencies. We find that such contagion links were strongest within the Eurozone and were significantly dampened by the OMT policy which implies that previously-detected contagion in the region had a significant self-fulfilling component.

Paul De Grauwe was right in his diagnosis of the Eurozone as a fragile region and relatedly, of the recent debt crises as having a strong element of self-fulfilling dynamics. The OMT has been an effective medicine to overcome the fragility. However, these reflections should not mask the fact that the euro is still an incomplete construct. Hopefully a day will arrive in the near future when the Eurozone is complemented with a fiscal authority with possibly centralised tax and redistributive powers so that it eventually evolves towards a currency with a single political and fiscal union. Given the strong German resistance to the OMT, no one can be fully sure if Draghi’s bold initiative will be able to survive until that day!

Image: A picture illustration shows a one euro coin on a flat screen displaying exchange rates in Rome. REUTERS/Stefano Rellandini