The growth of global value chains (GVCs) in the recent two decades has been one of the central developments in international trade. As coordination costs and trade costs continue to fall, it has become increasingly attractive for firms to offshore certain stages of their production. This, in turn, has led to the formation of regional and global production networks, which become manifest in a quickly expanding trade in intermediates and a rising foreign value-added content of exports (Johnson and Noguera 2012). Figure 1 illustrates this development for the years 1995 to 2008.

Figure 1. The rise of GVCs 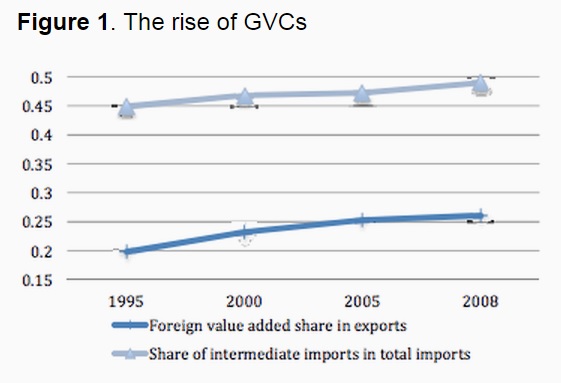 In the beginning of this so-called global value chains revolution, both policymakers and academics praised the growth and development opportunities that they offer to low- and middle-income countries. These countries are released from the need to build whole supply chains domestically in order to industrialise. Instead, they can more easily join existing supply chains and specialise in specific tasks according to their technological capabilities (e.g. Baldwin 2012, OECD 2013, and UNCTAD 2013).

It has not taken long though for opponents of such an optimistic view on GVCs to arise. Their concern is that such chains are just a new way to push for old liberal trade policies that give developed countries free access to developing markets (Dalle et al. 2013). There is also the possibility that developing countries might fall in the middle-income trap being stuck in low value-added activities (UNCTAD 2013). Similarly, policymakers in high-income countries are driven by the fear that manufacturing jobs move abroad.

New research shows now that GVCs can and do benefit the domestic economy if a set of prerequisites is fulfilled. Using a new unique set of inter-country input-output with extensive country coverage provided by the OECD, I find a positive and robust relationship between global value chains participation and domestic value-added (Kummritz 2014). This finding holds for indicators based on both backward linkages (i.e. foreign value-added in domestic exports) and forward linkages (i.e. domestic value-added in foreign exports) reflecting different stages of the value chain.

The result fits well with the growing theoretical work on GVCs and their impact on the domestic economy (e.g. Li and Liu 2014, Baldwin and Robert-Nicoud 2014, and Zi 2014). This literature analyses GVCs that are set up between a technologically less sophisticated low-wage country (‘south’) and a high-tech high-wage country (‘north’). The differences between the two countries make offshoring profitable by combining northern technology with southern wages. This, in turn, leads to benefits and losses for the two countries. The primary sources of gains for north are productivity improvements akin to technological change caused by lower costs and increased specialisation. South, on the other hand, profits through technology upgrading and increased specialisation, which leads to positive terms of trade effects and spillovers.

However, the new empirical evidence reveals one additional fact that is not explained by theory. More specifically, it shows that the positive effect of global value chains on domestic value-added is statistically significant for middle- and high-income countries only. Deriving novel source/using country-specific indicators for GVCs participation, I present evidence on theoretical transmission channels between the global chains and domestic value-added that explain these results. In particular, there is support for productivity enhancing effects through cost savings when richer countries source from low-wage countries. In contrast, there is only little evidence on gains through technology upgrading for low- and middle-income countries. Additional tests suggest that sufficient levels of absorptive capacity are necessary for such technology transfer effects to arise. Especially, human capital and legal institutions prove to be elementary factors for positive spillover effects into the domestic economy. Since absorptive capacity levels tend to be negligible in many low-income countries, the missing gains of GVCs participation for these countries on average can be easily explained.

These new findings lead to two conclusions for policymakers.

Forthcoming work by the World Bank outlines practical steps for low- and middle-income countries to enter global value chains and upgrade within them (Taglioni and Winkler forthcoming). It provides a toolbox that policymakers can use, for instance, to identify their comparative advantage sectors and potential deficits that need to be addressed before integrating into GVCs. This offers a concrete way forward for countries that are currently at the sideline of global value chains networks.

Author: Victor Kümmritz is a PhD candidate in International Economics, the Graduate Institute.

An expert explains: How COVID-19 exposed the fragility of global supply chains

Closures of manufacturing and distribution and bottlenecks at borders through the COVID-19 pandemic have exposed the fragility of global supply chains.

The top 100 companies of the world: the US vs everyone else

Regionalization vs globalization: what is the future direction of trade?

How to attract private finance to Africa’s development