How Eurozone money growth is speeding up

The recent release of monetary indicators by the ECB has shown a gradual acceleration of money growth in the euro area. The growth rate of the broadest monetary aggregate calculated by the ECB, M3, was 4 percent in February 2015 compared to February 2014.

However, as the literature on aggregation-theoretic measurement of money argues (see eg here), the simple-sum measures of money (the ECB publishes such measures) are not suitable measures of monetary developments.  This is because they simply add up various assets, which differ in the degree of their monetary and investment services. For example, cash and a two-year bank bond (which are both included in the ECB’s M3 aggregate) are quite different assets and are unlikely be perfect substitutes for money holders.

The so-called Divisia-money aggregates are derived from economic aggregation and index number theory and provide a better way to measure the stock of money. In November last year I developed a new Divisia-money dataset for the euro area, which has now been updated. The good news is that Divisia-money growth has also accelerated. The 12-month growth rate of Divisia M3 in February 2015 was 5.3 percent, which is the fastest growth rate since mid-2009 (Figure 1). 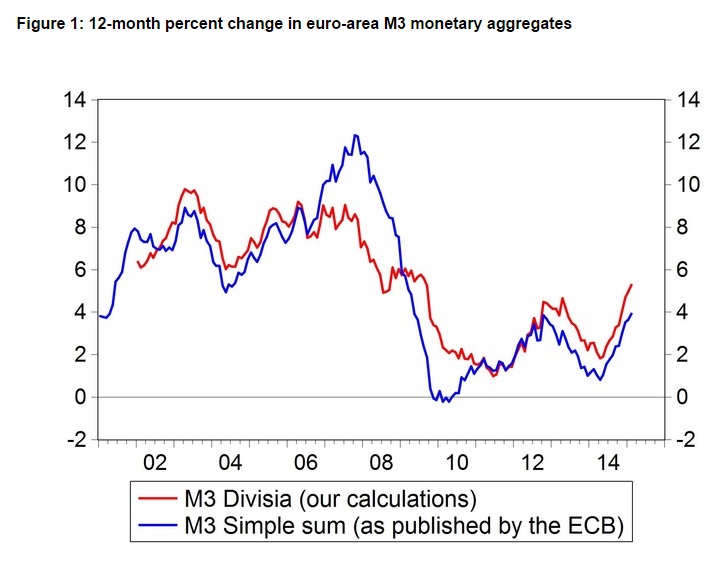 Does money matter in the euro area? “yes” if we use Divisia-money measures, but “not really” if we use simple-sum measures of money

Does money matter in the euro area? The answer I gave in my earlier research was a clear “yes” if we use Divisia-money measures, but “not really” if we use simple-sum measures of money (see my previous blogpost summarising my results here).

I have updated and refined my calculations, which confirmed my earlier findings. Euro-area output and prices are estimated to respond positively to changes in Divisia-measures of money (Figure 2), but I found weaker and generally non-significant results when I used simple-sum measures of money.

Figure 2: Euro-area output and price response to a Divisia-money shock

Note: The solid blue line indicates the point estimate of the impulse response function of real GDP (first panel) and GDP deflator (second panel) to a shock in the monetary aggregate, while the dashed red lines indicate the boundaries of the 95 percent confidence band. The horizontal axis indicates the number of quarters after the shock (with the shock occurring in quarter 1).

Author: Zsolt Darvas joined Bruegel as a Visiting Fellow in September 2008 and continued his work at Bruegel as a Research Fellow.

Image: A huge euro logo is pictured next to the headquarters of the European Central Bank (ECB) before the bank’s monthly news conference in Frankfurt. REUTERS/Ralph Orlowski.