What 100 years of commodity prices tells us about the future

Commodity prices are very persistent. During booms we seem to forget that they have always (yes, always) been followed by busts (see Figure 1). And during a slump we forget that a boom is surely going to come along— we just have to wait long enough. What determines such booms and busts? Was the last boom exceptional? Where are prices today relative to long-run trends? And the big question – where are prices likely to go from here?

Before seeking more complicated stories, three aspects of commodity theory should not be overlooked.

If traders are convinced China’s growth will rise in six months, boosting demand and the price of copper at that time, the price will rise today. As China demands virtually every commodity, all prices will increase. Or, if a new chance arises that hostilities in the Middle East may disrupt oil next year, oil prices will shoot up today, and then if through some hasty diplomacy the problem is solved, prices will fall— all without a single shot being fired. Forward looking commodity prices respond to the probabilities of future supply/demand events. Demand shocks may provoke high correlations across commodities, whereas supply shocks tend to be more idiosyncratic.1

Figure 1. Real (non-oil) commodity prices since 1900 and a naive projection 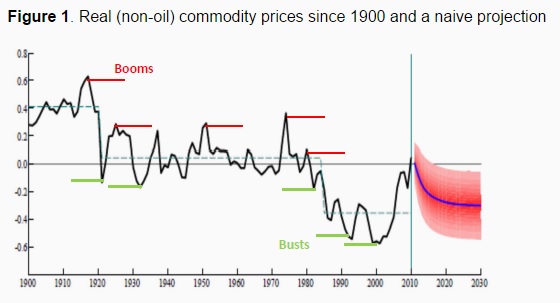 But – and it’s a pretty big but – sometimes a sharp increase in demand or a big disruption to supply may exhaust all current availability, known as a stock-out. This is rare but if it happens, the current (or spot) price will rocket up in a spectacular fashion.  Interestingly, the price expected in 24 months revealed by longer term futures contracts may not move much at all. The relationship between the total availability of a commodity and the spot price is not straightforward. As availability declines before reaching the extreme of a stock-out, prices will rise faster and faster.

High prices stimulate investment. And while it’s a dangerous statement, likely to attract some comment, we still don’t have a totally satisfactory model for commodity prices that has rational stockholding and incorporates forward looking investment that may take time, may be lumpy and that is generally sunk. Discussion has raged from the early cobweb (or hog-cycle) models through and beyond the rational expectations revolution.  The problem is related to the more general one of investment and business cycles but with the potential of stock-outs, rational inventory holding and the existence of financial markets with forward looking prices.

A ‘real’ view of the recent boom would be that strong global growth (until the Global Crisis) and especially high demand from China pushed stocks low and prices high. China grew at an average rate of 10.5% for 10 years (2002-12), creating a new economy the size of today’s Sweden or Argentina every year. But supply eventually caught up; more land came under agricultural cultivation and yields rose, new mining projects boosted metal production and new ways were developed to extract oil, not just from shale but also thanks to innovations in horizontal drilling.4

Others attribute the recent boom to financial developments: Global monetary policy, low interest rates, a financial bubble, and/or large dedicated commodity funds. Financial factors have surely also played a role. But it’s fiendishly hard to distinguish these and the real view when properly taking into account the basic aspects of commodity theory.5

Where are prices likely to go now? The IDB’s 2012 Latin American and Caribbean Macroeconomic Report argued that Chinese growth rates would wane and as they did, commodity prices would fall, presenting a significant risk for Latin American and other exporters. In a background paper for that report (Mariscal and Powell 2014), we argued that further declines were consistent with a return to a previously established equilibrium in real prices. The recently released 2015 Latin American and Caribbean Macroeconomic Report, based on underlying work by Ahumada et al. (forthcoming), presents estimates from error-correction, time-series models (for soya, wheat, corn, copper, and oil), that combine short- and longer-run factors, including supply and demand as well as financial variables, remaining agnostic on underlying theories.

Indeed, the very high uncertainty in any commodity price projection, including those extracted from futures prices, underlines the need for commodity exporting countries (and some importers) to find ways to manage these risks. These mechanisms may include hedging, especially of annual budget commitments (as Mexico has done recently), and the use of stabilisation funds (for example, in Chile).

Perhaps most worrisome for commodity exporters is the prospect that prices may fall below the previously established equilibrium in real prices. Suppose long-term prices with normal levels of stockholding are determined by an underlying long-run cost curve. Then, if high prices driven by sharper than expected changes in demand stimulate significant innovation, temporary booms will lower that curve. When the reasons for the boom subside, prices may fall below the previously established equilibrium. The two largest previous commodity booms in the past 115 years (in 1920 and in the early 1970s) both ended with crashes that lowered real prices relative to the previously established equilibrium – see Figure 1 again.6 The recent boom has been exceptional both in terms of its size and duration; only time will reveal the full impacts of supply innovations on long-run commodity prices, but if history is our guide they may lower real commodity prices even further.7 And we may have to wait many years for the next boom to come along.

Frankel, J A (2014a),  “Effects of Speculation and Interest Rates in a “Carry Trade” Model of Commodity Prices”, Journal of International Money and Finance 42(C) April: 88–112.

Frankel, J A (2014b) “Why Are So Many Commodity Prices Down in the US… Yet Up in Europe?”, econbrowser.com, December.

Gustafson, R L (1958) “Carryover Levels for Grains: A Method for Determining the Amounts Which Are Optimal under Specified Conditions”, Technical Bulletin no. 1178. US Department of Agriculture, Washington, DC.

Powell, A (2015), “The Labyrinth: how can Latin America and the Caribbean Navigate the Global Economy”, Latin American and Caribbean Macroeconomic Report 2015, Inter-American Development Bank.

1 On storage and inter-temporal arbitrage see a good finance text such as Hull (2014). Radetzki (2006) provides a useful account of the demand and supply shocks leading up to the last three commodity booms.

2 Availability is often defined as stocks plus current period production. Samuelson (1965) noted spot prices would be more variable than longer term futures prices. Gustafson (1957) developed a model of intermittent commodity production where agents decide rationally whether to store output. Williams and Wright (1991) and Deaton and Laroque (1992, 1996) independently generalised Gustafson’s model providing elegant solutions to the dynamic programming problem with stochastic supply – the innovation in the 1996 paper being serially correlated shocks. Divir and Roggoff (2010) derive a similar model but with demand shocks and apply the results to the global oil market.

3 Kaldor (1939) used adaptive explanations to generate (cobweb) price cycles. Muth (1961) devotes a good chunk of his famous rational expectations paper to a discussion of commodity prices and “inventory speculation”.  Rosen et al. (1992) develop a model and present detailed empirical evidence on cattle cycles. The investment cycles of different commodities may vary widely; it takes 7 years for a coffee tree to reach full-yield, a copper mine may take over 10 years to develop, etc. A literature (not reviewed here) has attempted to use spectral analysis to identify different cycles in commodity prices. Casassus et al. (2009) develop a general equilibrium production economy model of oil with irreversible investment. Kydland and Prescott (1982) develop a model in which investment takes time generating potential business cycles.

4 Kilian (2009) argued that the boom in oil prices was mostly due to demand shocks. Alquist and Coibion (2014) derive similar results for non-oil commodities. On supply responses, see in particular USDA (2014) for agriculture and the World Bank (2015), especially on metals and oil. Arezki and Blanchard (2015) argue it was largely supply that provoked the recent collapse in oil. Hamilton (2014) estimates waning demand accounted for the price falling from $105/barrel to $85 by 3 December 2014; the actual price was $58 on that date. The supply response was in part due to unexpected developments in Saudi Arabia and (less clear) an unanticipated come back of Libyan and Iraqi oil, but to the extent it was also new investment, this begs the question why such investment if that prompted the collapse?

5 Gilbert (2010) argues both real and financial factors were important in explaining high food prices. Gilbert and Pfuderer (2012) argue the advent of indexed commodity funds impacted (futures) prices. Frankel (2014a) argues that monetary policy is critical to understand commodity prices, suggesting various channels. This discussion goes back to Hoteling and the role of the interest rate but Frankel (2014b) stresses the ‘exchange rate’ channel as well. See Gilbert (1989) for a discussion and earlier estimates of the role of exchange rates on commodity prices. As commodity prices were in backwardation (futures prices below spot prices) through most of the period of the boom and as stocks were falling and not rising, this would seem to count against bubble-type explanations.

6 In an early paper (Powel 1991) applying cointegration techniques to commodity prices, I showed that with a very limited number of structural breaks in 100 years, commodity prices are cointegrated with manufactured export unit values with a cointegrating vector of 1.0, implying no downward trend in real commodity prices as proposed by Prebisch (1950) and Singer (1950). However, the two main breaks were negative and came after major commodity booms provoking the aforementioned argument.  We find similar results with more data and using modern saturation techniques to endogenously determine the timing and the magnitude of those breaks (Mariscal and Powell 2014). See Hendry et al. (2014) and Doornik et al. (2013) on saturation methodologies.

7 We compare the recent boom with previous 20th century booms arguing the recent one is indeed exceptional (Mariscal and Powell 2014). While innovation pushes the cost-curve out, the fact that the best seams/cheapest oil wells are being exhausted goes the other way, so the net impact of innovation and exhausting the cheapest material to extract is ambiguous.

Author: Andrew Powell is the Principal Advisor in the Research Department of the Inter-American Development Bank.

Image: U.S. one dollar bills blow near the Andalusian capital of Seville in this photo illustration taken on November 16, 2014. REUTERS/Marcelo Del Pozo.