Economic activity in Latin America and the Caribbean has been cooling down for several years, and the temperature in many places is still falling. Regional growth is now expected to dip below 1 percent in 2015—down from 1.3 percent in 2014. Apart from a short-lived recession during the global financial crisis, this would be the slowest rate of growth since 2002.

However, growth dynamics vary across the region, broadly along North-South lines. While spring may be in the air for Mexico, Central America, and parts of the Caribbean, the economic climate remains decidedly chilly in much of South America. What is behind these divergent prospects, and how can a sunnier outlook be restored to the entire region?

Signs of spring up North…

For most economies in Central America and the Caribbean, both of these developments are good news. Linked to the U.S. economy through trade, remittance, and tourism flows, they will benefit from buoyant activity in the United States, even if it entails a gradual rise in U.S. interest rates. At the same time, cheaper oil is creating significant relief, cutting import bills by 3-4 percentage points of GDP on average. The pick-up in growth would be stronger if it were not for long-standing domestic problems that continue to weigh on activity—notably, weak fiscal positions in many countries and significant competitiveness challenges in the tourism-dependent Caribbean. A better external environment provides a good opportunity to address these problems.

Mexico’s economy, in turn, is projected to pick up pace, supported by stronger U.S. demand. Lower oil prices create some revenue losses for the government, but since oil production no longer accounts for a large share of activity, the headwinds to growth should be limited. 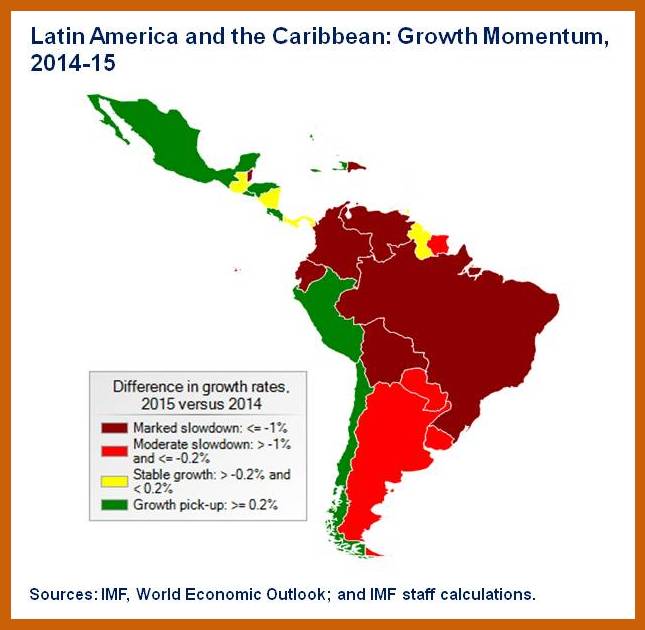 …but chills continue down South

For South America, by contrast, recent external developments have been mostly unfavorable. Trade linkages with the U.S. economy are relatively modest, limiting positive spillovers. Meanwhile, the continued decline in commodity prices has hit the region’s heavyweight commodity exporters. The most affected in recent months have been economies with significant oil and gas exports, notably Venezuela, Bolivia, Ecuador, and Colombia, whose terms of trade (the price of exports relative to the price of imports) have plunged. Country-specific challenges, including very weak private sector confidence in Brazil and the intensifying economic crisis in Venezuela, further weigh on their outlook.

In this environment, growth is projected to slow further in most of South America, as weakness in corporate investment spreads to consumer spending. Three of the largest economies (Argentina, Brazil, and Venezuela) are expected to see contractions in 2015. On the upside, growth should rebound in Chile and Peru, helped by supportive fiscal and monetary policies that reflect strong macroeconomic frameworks and buffers built up during good times. Elsewhere, prospects depend on the nature of the external shock that economies are facing—Uruguay, for instance, has recently seen its terms of trade improve, as gains from cheaper oil imports outweigh losses from lower agricultural export prices—and their capacity to adjust. Flexible exchange rates can play an important role in facilitating the adjustment, by shifting demand toward locally produced goods. Colombia is a case in point, as the marked depreciation of the peso is expected to boost demand for its (noncommodity) exports.

No quick fix to raise the temperature

Even as South America grapples with low growth, unemployment remains at historically low levels in most of the large economies. Inflation is above midpoint targets, while current account deficits have generally widened further. Together, these facts suggest that economic slack still remains limited. With forecasts for growth over the medium term also revised down further, it seems clear that the region is facing more than just a temporary cyclical slowdown. Moreover, structurally weaker growth prospects coincide with a significant loss of policy space, as fiscal buffers have eroded in many countries, while depreciating exchange rates reduce the scope for further monetary easing.

How to bring back sunnier times

Thus, caution is warranted against trying to turn up the heat with excessive macroeconomic policy stimulus. Restoring solid growth prospects will, instead, require a clear focus on addressing structural weaknesses—in infrastructure, education, governance, and the business environment.

Policymakers across Latin America will also need to keep a close eye on financial sector risks. After several years of strong credit growth, capital inflows, and increasing issuance of corporate bonds in international markets, firms and households in many countries are now facing a tighter financing environment at the same time as corporate earnings and employment have started to weaken. Moreover, faster-than-anticipated normalization of U.S. monetary policy or other global shocks could prompt fresh turbulence in financial markets, while the marked appreciation of the dollar might hurt borrowers with unhedged dollar debt. Overall, sound balance sheets and credible policy commitments provide the best insurance against financial disruptions. Central banks, in particular, should maintain a clear focus on keeping inflation on target, while standing ready to forestall excessive exchange rate volatility or disorderly market dynamics with targeted interventions.

In short, policymakers across Latin America and the Caribbean have their work cut out. With vigilance to financial risks, a firm commitment to prudent macroeconomic policies, and determined progress in structural reforms, the long stretch of chilly weather will eventually give way to warmer temperatures throughout the region again. We explore these topics further in our upcoming Regional Economic Outlook, which will be released on April 29.

Author: Alejandro Werner assumed his current position as Director of the Western Hemisphere Department of the International Monetary Fund  in January 2013.

Only three new jobs are created for every 10 layoffs caused by coronavirus, according to new research by the University of Chicago.

Investing in Africa to help it weather the crisis is a strategic decision for the future.