Which ASEAN country is the most competitive?

Ahead of the World Economic Forum’s East Asia Regional Meeting on April 19, we’re looking at how countries in the ASEAN group compare on key issues. Singapore tops the table when it comes to competitiveness, according to the World Economic Forum’s Global Competitiveness Report 2014-2015, and comes in at number two globally. The five largest ASEAN economies: Malaysia, Thailand, Indonesia, the Philippines and Vietnam, have all been improving fast and feature in the top half of the field. But only one, Malaysia, makes it into the world top 20.

The World Economic Forum ranking, the most comprehensive assessment of national competitiveness, scores a dozen drivers of competitiveness including education, market efficiency, infrastructure, technology and macroeconomics. 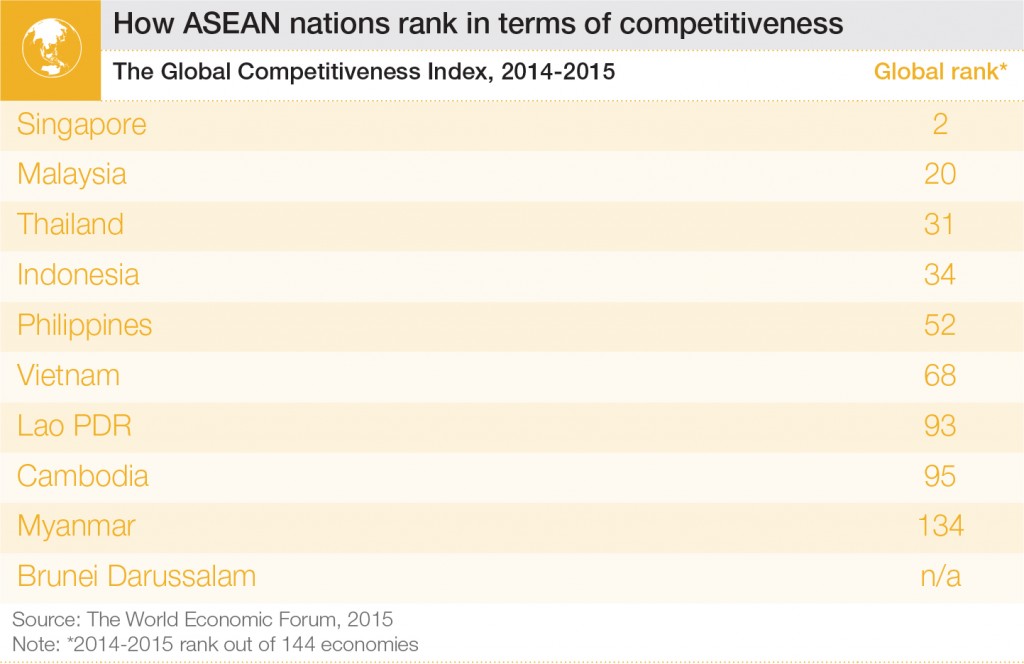 1. Singapore ranks number two in the world for competitiveness as a result of consistently high scores across the 12 measures. It leads the world in the area of ‘basic requirements’, which covers the quality of institutions, infrastructure, health & primary education, and macroeconomic factors. Singapore comes second in the area of ‘efficiency enhancers’ covering higher education and training, goods market efficiency (in which it comes top), labour market flexibility, access to finance and regulation, technological prowess, and market size. The country scores less well in the area of ‘business sophistication’ where it comes 19th for the sophistication of business processes and 9th for innovation.

2. Malaysia is the highest placed developing Asian economy. It ranks 4th in financial market development, which reflects its efforts to become the leading center of global Islamic finance. And Malaysia comes 7th in the efficiency of its goods and services markets. In a region plagued by corruption and red tape, Malaysia stands out as one of the very few countries that have been successful at tackling these two issues. The country ranks an impressive 4th for the burden of government regulation and 26th for ethics and corruption. It ranks 11th for the quality of its transport infrastructure, a remarkable feat in a region in which insufficient infrastructure and poor connectivity are major obstacles to development. The low level of female participation in the workforce (119th); and comparatively low technological readiness (60th) stand out as two of Malaysia’s major competitive challenges

3. Thailand continues to advance up the world competitiveness rankings despite political instability. The country is placed 19th on macroeconomics, its best showing among the 12 measures, and scores well in financial development (34th) and market efficiency (30th). However, market competition remains limited by high barriers to entry, especially those affecting foreign investments. Considerable challenges remain in other areas, particularly governance. Political and policy instability, excessive red tape, pervasive corruption, security concerns, and high uncertainty around property rights protection seriously undermine the institutional framework (93rd in public institutions.) The level of trust in politicians is among the lowest in the world (129th) and another concern is the mediocre quality of education at all levels (87th.)

4. Indonesia has benefited from infrastructure and connectivity improvements, strengthening public and private governance, and has achieved a remarkable 36th place for government efficiency. Despite progress, corruption remains prevalent (87th) and the labor market (110th) remains the country’s weakest aspect, owing to rigidities in wage setting and hiring and firing procedures. The participation of women in the workforce remains low (112th), public health (99th) is an area of concern, and the incidence of communicable diseases and infant mortality are among the highest outside sub-Saharan Africa. On the more sophisticated drivers of competitiveness, Indonesia’s technological readiness is lagging (77th) with the use of ICTs by the population at large comparatively low (94th.)

5. The Philippines has gained 33 places since 2010 — the biggest jump of any country studied. It has leapfrogged on institutional factors with efforts made against corruption bearing fruit — the country moving from 135th in 2010 to 81st.  A similar pattern is observed in terms of government efficiency (69th) and the protection of property rights (63rd) and there have been significant strides in terms of technological adoption (69th). The country is one of the most digitally connected developing Asian nations, close behind Malaysia (60th) and Thailand (65th). The same cannot be said of infrastructure, however, which remains poor (91st), especially with respect to airports (108th) and seaports (101st). The labour market suffers from rigidities (91st) Finally, and security remains an issue (89th) particularly in the costs that the threat of terrorism imposes on businesses (110th).

6. Vietnam ranks 68th with its labour markets ranking 49th, its best showing among the 12 measures of competitiveness with the exception of market size (34th).The macroeconomic environment (75th) is improving and public institutions (85th) are strengthening from a low base on the back of better property rights protection (104th), improved efficiency (91st), and a lower level of perceived corruption (109th). Vietnam’s financial sector and its banks remain vulnerable. Technological readiness remains low (99th) with the country’s businesses especially slow in adopting the latest technologies (118th), thus forfeiting significant productivity gains through technological transfer. The degree of business sophistication is low (106th), with companies typically operating toward the bottom of the value chain.

7. Lao PDR scores best on institutional factors (63rd) and the efficiency of markets for goods (59th) and labour (34th).  Public trust in politicians (29th) and the burden of government regulation (26th) are notably strong. When it comes to employment, Cambodia ranks 5th in the world for the female participation rate and 8th for flexibility in pay. Measures of goods market efficiency like buyer sophistication (45th) and foreign direct investment (34th) help Lao’s ranking. But the macroeconomic environment (124th) and market size (121st) drag the nation down.

8. Cambodia ranks 95th and has been losing competitiveness over the past few years. The country scores notably well on labour market efficiency (29th) — the only key measure on which it is in the top half of the countries studied. Cambodia has one of the best labour market participation rates for women in the world (18th) and its hiring and firing practices are ranked 13th. It does relatively well on macroeconomics, particularly on inflation (58th) and government debt (30th). However, the country faces major challenges on institutional factors including property rights and corruption, and in the area of innovation where scientific research (118th), availability of scientists and engineers (123rd) and patent applications(124th) are towards the bottom of the tables.

9. Myanmar ranks 134th, a reflection of decades of political and economic isolation. The country has embarked on an ambitious process of reforms to improve the country’s economic landscape and prospects, notably by leveraging Myanmar’s abundance of natural resources, favorable demographics, and strategic location in the heart of Asia. While competitiveness is at the core of this strategy, the country has a long way to go and notwithstanding improvements in most measures it is placed beyond the 100th rank in 10 out of the 12 areas of competitiveness.