Why has the workplace gender gap stopped closing?

Despite the fact that more women than men go to college these days, the reduction of the gender gap in labour market outcomes has stalled. Recent research suggests that one of the culprits might be gender identity norms.

Akerlof and Kranton (2000) import insights about the importance of social identity from sociology into economics. They define social identity as one’s sense of belonging to a social category that comes packaged with a view about how people in that category should behave. The social identity influences economic outcomes because deviating from the prescribed behaviour is costly. Hence, a desire to conform to one’s sense of self is an important driver of people’s actions. In the case of gender identity, the two relevant social categories are those of a ‘man’ and a ‘woman’, and these two categories are associated with specific behavioural prescriptions.

Given a behavioural prescription that men should work and women should take care of the home, gender identity norms may explain why women are less likely to participate in the labour force. Fortin (2005) argues that the social representation of women as homemakers and men as breadwinners drives the variation in women’s labour force participation across countries. Fernandez and Fogli (2009) show that, controlling for individual and spousal socio-economic backgrounds, second-generation American women whose ancestors hail from countries with higher female labour force participation, are also more likely to work. The ancestry of the spouse also seems to matter.

Another prescription often associated with gender identity is that a man should earn more than his wife. In a recent article, we explore the possible manifestations of this gender identity norm in patterns of relative income within households, marriage formation, wives’ labour force participation, marital satisfaction, and the division of home production (Bertrand et al. 2015). Using US administrative data, we show that the distribution of the share of the household income earned by the wife exhibits a sharp drop to the right of 0.5, i.e. when the wife starts to earn more than the husband (see Figure 1). This pattern is consistent with the existence of gender identity norms that induce an aversion to a situation where the wife earns more than her husband.

Figure 1. Distribution of relative income within household from the Survey of Income and Program Participation (SIPP) administrative data 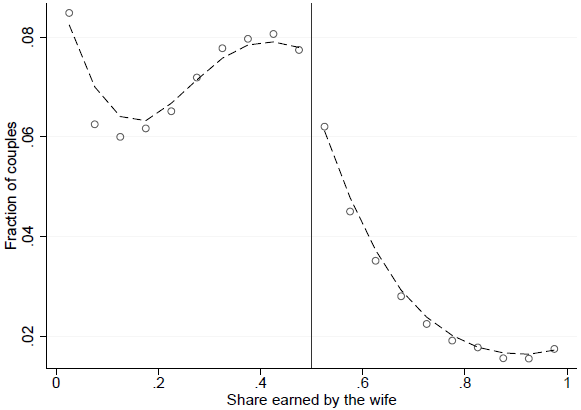 Using US Census data, we also show that within a marriage market over time, when a randomly chosen woman becomes more likely to earn more than a randomly chosen man, the marriage rate declines (see also Watson and McLanahan 2011). This result suggests a potential link between two important social developments over the last several decades: The increase in women’s income relative to that of men and the decline in the prevalence of marriage.

Next, we look within couples to examine whether gender identity norms distort labour market outcomes. A wife whose income would exceed her husband’s may choose to alter her labour supply decisions so as to be less threatening.

Moreover, if she does work, the gap between her realised and her potential income is greater (in part due to lower hours of work). In other words, women are bringing a glass ceiling from home to work.

While couples seem to try to avoid the situation where the wife earns more than the husband, this situation has nonetheless become quite common. When gender identity norms are violated in this way, the marriage tends to suffer.

Finally, using time-use data we show that, controlling for both individuals’ incomes, when the wife starts to earn more than the husband, she starts taking on more of the household chores. Perhaps these ‘threatening’ wives do this in order to assuage their husbands’ unease with the situation. The wife, of course, may ultimately get tired of working this ‘second shift’ (Hochschild and Machung 1989), which might be one of the mechanisms behind our results on divorce.

So far we have been discussing how gender identity influences socioeconomic outcomes. An equally important question is what determines the evolution of the norms themselves.

Innovations in contraception may have contributed to altering women’s identity in the 1960s and 1970s. As Goldin and Katz (2002) show, the introduction of the Pill led to an increase in women’s investment in schooling and to an increase in the age at first marriage. This, Goldin (2006) argues, meant that women’s adult identities were less influenced by traditional gender roles (as these identities were now more likely to be formed before marriage) and more influenced by career considerations.

Other papers have discussed the influence of nurture in the formation of gender identities. Many believe that gender role attitudes are largely determined in early childhood, and several papers have documented something akin to an intergenerational transmission of gender identity norms. Fernandez et al. (2004) argue that men growing up in families with working mothers tend to be more comfortable with having their wives work. These men may have developed less stereotypical gender role attitudes, with weaker association between their masculinity and exclusive breadwinning. This finding suggests a virtuous cycle – with more of these ‘new’ men around, more women join the labour force and thereby expose their sons to less traditional family structure.

While the aforementioned papers suggest the malleability of gender identity norms over rather short horizons, other work suggests stickiness of these norms in the longer term. Alesina et al. (2013) show that ethnicities and countries whose ancestors practiced plough cultivation (which required more physical strength than shifting cultivation and hence was less suited for female labour) have lower rates of female labour force participation even today. They identify the causal impact of plough use by exploiting variation in the historical geo-climatic suitability of the environment for growing crops that differentially benefited from the adoption of the plough.

Given that social norms appear to evolve relatively slowly, rapid gains in women’s labour market opportunities are likely to have made gender identity norms increasingly relevant. Improvements in women’s opportunities have occurred all around the world and many countries with historically conservative norms (such as East Asia and Southern Europe) now have to contend with a new reality. The interaction of rapid economic progress among women and slowly changing gender norms may play an important role in widespread demographic changes observed in these countries such as the decline in marriage rates and fertility among educated women (Hwang 2012). Understanding the long-run determinants of gender identity and how it evolves in the face of market forces that are making these norms increasingly costly is a crucial step in the strive for gender convergence in the labour market.

Image: A woman is silhouetted next to a solar panel display by solar module supplier Upsolar at the fourth International Photovoltaic Power Generation (PV) Expo in Tokyo. REUTERS/Yuriko Nakao

Female leadership across global finance has risen in recent years, with research suggesting the positive benefits of such an increase.