Will the US approve the Trans Pacific Partnership?

Danielle Kurtzleben writes that the Trans-Pacific Partnership has become one of the hottest topics in Washington, as it appears to be one of the few topics on which President Barack Obama and Republicans might be able to reach any sort of agreement in this session of Congress. Roger Altman and Richard Haass write that after five years, American-led negotiations over the Trans-Pacific Partnership are nearly complete. The next step is for Congress to allow for the same legislative process — an up-or-down vote on the deal — that it applied to recent trade pacts, including the North American Free Trade Agreement of 1993 and the United States-South Korea free trade agreement of 2011.

Timothy Lee writes that Obama’s predecessors have enjoyed Trade Promotion Authority, also known as “fast track”, which allowed them to negotiate a number of trade deals. But the authority expired in 2007, and Obama has struggled to get it renewed by Congress (Naked Capitalism notes that Obama failed in the last Congress to get fast-tracked due mainly to considerable opposition in the Democratic party). Danielle Kurtzleben writes that the idea of fast track is that a president needs to be able to negotiate a treaty without the fear that Congress will amend it after he and a whole bunch of other countries come to agreement on a deal. When the president has TPA, he consults with Congress, but once a deal is reached, Congress can only vote it up or down — no amendments. Without that authority, it’s not really feasible to reach a credible deal with foreign leaders. Greg Mankiw writes that with influential lawmakers like Senator Elizabeth Warren opposed to the measure, final congressional approval is far from certain.

The Council of Economic Advisers writes that the TPP is a proposed regional FTA that the United States is negotiating with 11 other countries: Australia, Brunei Darussalam, Canada, Chile, Japan, Malaysia, Mexico, New Zealand, Peru, Singapore, and Vietnam. Based on the most recent data, TPP partners account for 37 percent of world GDP, 11 percent of the world’s popula­tion, and 23 percent of world exports of goods and services. 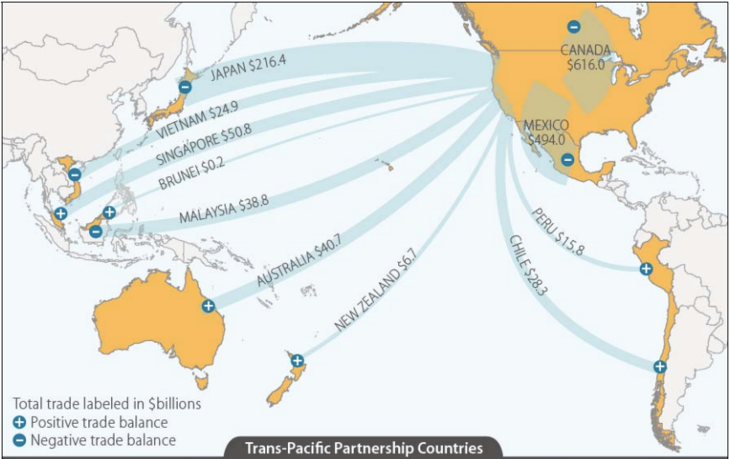 The enforceability of trade provisions

Timothy B. Lee writes that, in the past, debates about trade deals have mostly been about trade. In contrast, debates over the TPP mostly haven’t focused on its trade provisions. As the opportunities for trade liberalization have dwindled, the nature of trade agreements has shifted. They’re no longer just about removing barriers to trade. They’ve become a mechanism for setting global economic rules more generally.

Timothy B. Lee writes that the robust enforceability of trade agreements is unusual and is the reason why TPP would cover such a wide range of topics. If a country fails to live up to its commitments under the TPP, it can be hauled before a TPP dispute-settlement panel and — if it loses — face trade sanctions. Which means countries are likely to actually comply with their commitments — something that isn’t necessarily true of other types of international agreements.

Ezra Klein writes that people at the White House note that Obama ran for office promising to renegotiate NAFTA, and while that didn’t happen, this deal fully reflects his thinking about what went wrong with NAFTA — particularly in the weak enforceability of its labor and environmental standards. People will be surprised by how different from its predecessors this trade deal really is when the text is finalized and released publicly.

The Council of Economic Advisers writes that failing to secure a TPP agreement would place U.S. workers and businesses at a distinct disadvantage, by allowing other countries to set the rules of the global trading system—rules that would likely be adverse to U.S. interests. Comprehensive trade agreements like TPP offer the United States a way to shape globalization’s rules in the best interest of American workers and firms and to ensure that global standards include important issues like worker and environmental protections.

Lawrence Summers writes that some matters that are pushed by elements of the business community have little or nothing to do with the interests of the vast majority of American workers. These include pressuring other countries to change health and safety regulation, to extend and strengthen patent protection and to deregulate financial services. Conversely, it is appropriate in TPP, and our international economic diplomacy more generally, that we use the substantial leverage we possess in areas that do bear directly on middle-class living standards. These include the prevention of inappropriate producer subsidies — including through manipulated exchange rates or distorted state enterprise accounting.

Paul Krugman writes that, as with many “trade” deals in recent years, the intellectual property aspects are more important than the trade aspects. Leaked documents suggest that the US is trying to get radically enhanced protection for patents and copyrights; this is largely about Hollywood and pharma rather than conventional exporters. Do we really think that inadequate incentive to create new drugs or new movies is a major problem right now?

Brad DeLong writes that although estimates of the potential gains from freer trade are small number relative to the wealth of the world both now and discounted into the future, this is a rather large number compared to other things the U.S. government might do this year. Paul Krugman says that the potential net gains from freer trade in services and (secondarily) agriculture as estimated by Petri, Plummer and Zhai of 0.5% of GDP “seem high to him”. Suppose that they are half that. In a Pacific region whose GDP is now approaching $30 trillion/year, that is $75 billion/year. Capitalize that at 4%/year and we get a net addition to world wealth of $3 trillion.