Are there cultural obstacles to democratisation?

Recent decades have seen great progress in democracy across the world. According to Freedom House (1999), there was not a single liberal democracy with universal suffrage in the world in 1900. By 2000, 120 of the world’s 192 nations were liberal democracies. The main explanation in social sciences for democratisation is the ‘modernisation hypothesis’ (Lipset 1959), according to which countries become democratic as their income per capita rises. A large part of the literature on the determinants of democracy centres on whether and how growth of income per capita leads to democracy. If the modernisation theory is correct, we should expect, for example, China to become democratic as it becomes richer.

Surprisingly, the literature on democratisation remains silent on the effects of cultural values on political regimes. In Gorodnichenko and Roland (2015), we present a theory and empirical evidence for the role of culture on democratisation. Cultural values affect the direction of institutional change away from autocracy when there is a window of collective action (revolution, elite revolt). These episodes of collective action do not necessarily lead to democracy, even when they are successful, but may lead to another autocratic regime. We compare decisions of collective action under an individualistic culture, giving social status reward to standing out and innovativeness, and a collectivist culture emphasising conformity and embeddedness in large groups (tribes, clans).

There is empirical evidence for these predictions. Figure 1 shows the correlation between Hofstede’s index of individualism (countries with a high score are more individualistic and countries with a low score are more collectivist) and the average Polity IV score – one of the best known measures of democracy – for countries in the period between 1980 and 2008. This spell covers the third wave of democratisation (Huntington 1991) and thus displays considerable variation. Countries with a lower average polity score either democratised later, not at all, or in an imperfect way. The Hofstede (2001) individualism index is widely used in sociology and cross-cultural psychology, and increasingly frequently in economics. As we can see from Figure 1, there is a strong correlation between individualism and the average polity index. 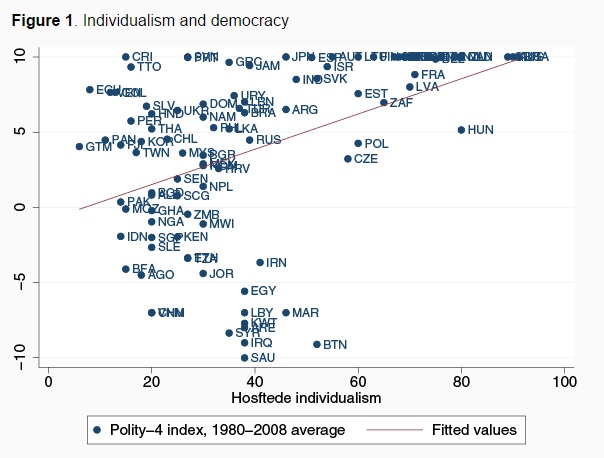 As another instrumental variable, we use the Euclidian distance between the frequency of blood types A and B in a given country and the frequency of those blood types in the US, which is the most individualistic country. This is a measure of genetic distance. To the extent that culture is transmitted mainly from parents to children (see, for example, Fernandez and Fogli 2009 and the models by Bisin and Verdier 2000), so are genes. Thus, this instrumental variable can be seen as a proxy measure of cultural transmission. To be clear, we do not postulate a direct causal effect between genes (here blood types) and culture. Note also that blood types are neutral genetic markers that do not affect human behaviour. They are thus not likely to have any effect on political regime choices.

The magnitude of the estimated effect remains large even after controlling for the variables that have been used in the literature on democracy. Specifically, we find that individualism continues to be a strong determinant of democratisation after controlling for income per capita. Hence, we can show that there is a significant direct effect of individualism on democracy.

In Gorodnichenko and Roland (2010 a, b), we documented that countries with a more individualist culture have more innovation and higher long-term growth, controlling for the usual variables used in the growth literature, such as institutions and education. Our research thus shows that individualistic cultures may affect both income per capita and democracy.

Our theoretical and empirical results have important implications. In particular, as countries with collectivist cultures develop economically, they will not necessarily evolve towards democracy or might do so more slowly or possibly only under the effect of an exceptional crisis. Countries like China, Vietnam or Singapore, which have experienced considerable economic success in recent decades have not adopted Western-style democracies. Similarly, countries that have experienced a genuine democratisation process like Taiwan, Thailand, Indonesia, and Korea have done so relatively recently and their average polity scores over the last 30 years have not been better than Guatemala, Panama or Peru. Countries in the Middle East have in general higher individualism scores than many Asian countries. In the long run, if our analysis is correct, they could end up becoming more democratic, despite the higher authoritarian streak observed in the past in Islamic countries.

Bisin, A, and T Verdier (2000), “Beyond The Melting Pot”: Cultural Transmission, Marriage, And The Evolution Of Ethnic And Religious Traits”, Quarterly Journal of Economics 115, 955-988.

Gorodnichenko, Y, and G Roland (2010a), “Culture, Institutions and the Wealth of Nations”, CEPR Discussion Paper 8013.

Author: Yuriy Gorodnichenko is an associate professor at the Department of Economics, University of California – Berkeley. Gérard Roland joined the Berkeley economics department as a professor in 2001.

Whilst many of us will be watching more TV during the COVID-19 pandemic, psychologists say that in moderation, it may be good for our mental health.

How timing could be the key to combatting misinformation online

MIT researchers found fact-checking labels that came after the false headline were more effective at reducing people's misclassification of headlines.

Where are LGBTQI+ characters on TV?