“Let’s partner on climate action. Now.” This was the message of CEOs from 43 companies and 20 economic sectors, released on 17 April this year. The meaningful goal of decarbonizing the future cannot be achieved without a substantial change in automotive transport. And China – the world’s largest auto market, with almost 22 million vehicles sold in 2014 – will play the most important role.

The Chinese car industry and the Chinese government reiterated their commitment to this issue during the Shanghai Motor Show and the China Auto Forum in late April. The latter is hosted by the Chinese Association of Automobile Manufacturers, with the participation of policy leaders, senior executives from both domestic and foreign manufacturers and suppliers, and automotive experts at the World Economic Forum. New energy vehicles (NEVs) have been the focal point of motor-show and industry discussions. Still, two major questions need further exploration: what prevented the sales of NEVs in the past and how can we encourage the adoption of clean technology in the future?

Despite the ambitious goal having 5 million new energy vehicles on Chinese roads by 2020, generous governmental subsidies of about 60,000 yuan ($9,750) per vehicle and strict number-plate regulations for combustion engines in some cities, demand for alternative-energy vehicles in China has been slow. Even with a tripling of sales in 2014, the total sales volume of NEVs reached only 74,763 units (or 0.4% of total passenger car sales).

In major automotive markets like the USA and Germany, “range anxiety” – the consumer’s fear of running out of energy before reaching the destination – has been the major obstacle to electric-car adoption. Meanwhile, in China, the lack of public charging infrastructure has been the major barrier for purchase.

Many Chinese car owners, living in apartment complexes, don’t have their own garages or parking spaces where they can charge a plug-in vehicle overnight. Moreover, corporate parking lots are not yet sufficiently equipped with charging sockets. On a global level, regions that account for the highest share of electric vehicles show a higher density of public charging stations than China. For example, the Netherlands offers 290 charging stations per 1,000 km2 (and 3.9% NEV sales share in 2014). China only manages three charging stations in the same space.

While identifying and addressing the major issue might be the first step in the right direction – e.g. Beijing’s municipal government unveiling a policy in February to provide an investment subsidy of 30% for building charging stations for public usage – a real boost in NEV registration will require a holistic approach in a private-public partnership considering different requirements of consumers on personal transportation. 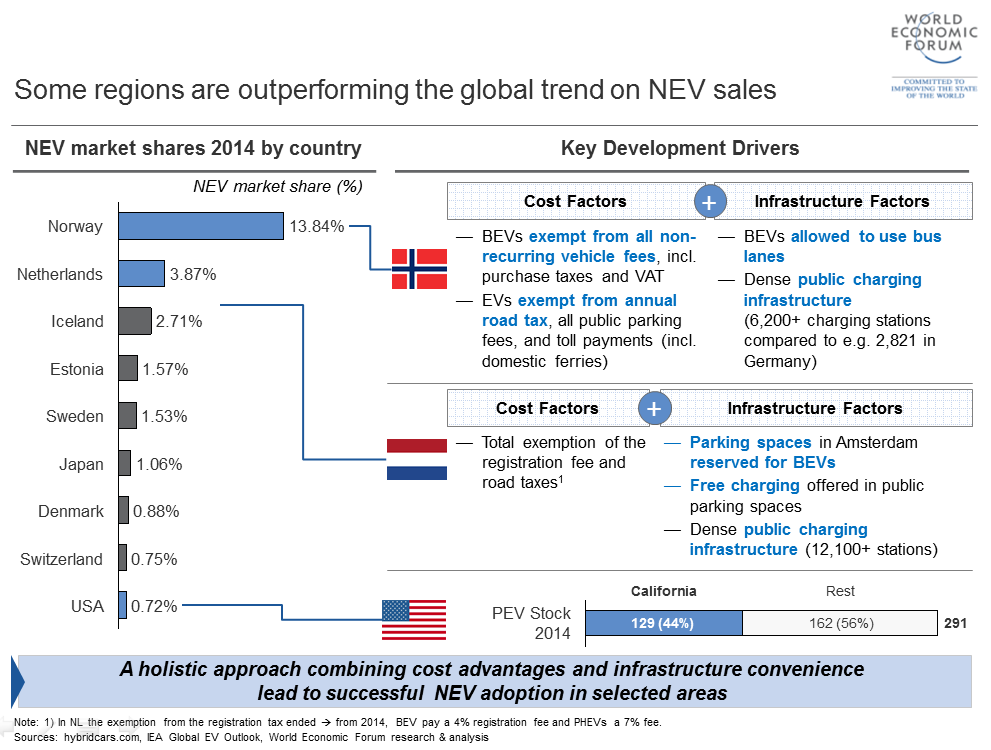 In China, 54% of people still prefer the personal car for transportation. In regions such as Norway (12.5% NEV sales share in 2014), Netherlands and California, the key driver in boosting NEV sales proved to be a combination of advantages related to ownership cost and convenience of operation. Beside purchase advantages in Norway (where battery electric vehicles (BEVs), for example, are exempt from all non-recurring vehicle fees, including purchase taxes and VAT) the vehicle owners are not required to pay the annual road tax, public parking fees or toll payments (including domestic ferries).

BEVs are allowed to use bus lanes, giving owners advantages over their gasoline-powered peers. In California, NEVs are allowed to operate in high-occupancy vehicle lanes, helping to circumnavigate the daily traffic. The Chinese government should consider providing incentives on running cost, in addition to or instead of one-time incentives on the purchase price of NEVs. Cities should evaluate offering advantages for NEVs over internal-combustion-engine vehicles (e.g. usage of special lanes, reserved parking). Public and private sectors should collaborate to ensure a sufficient charging infrastructure, which is key to ramping up NEV adoption. 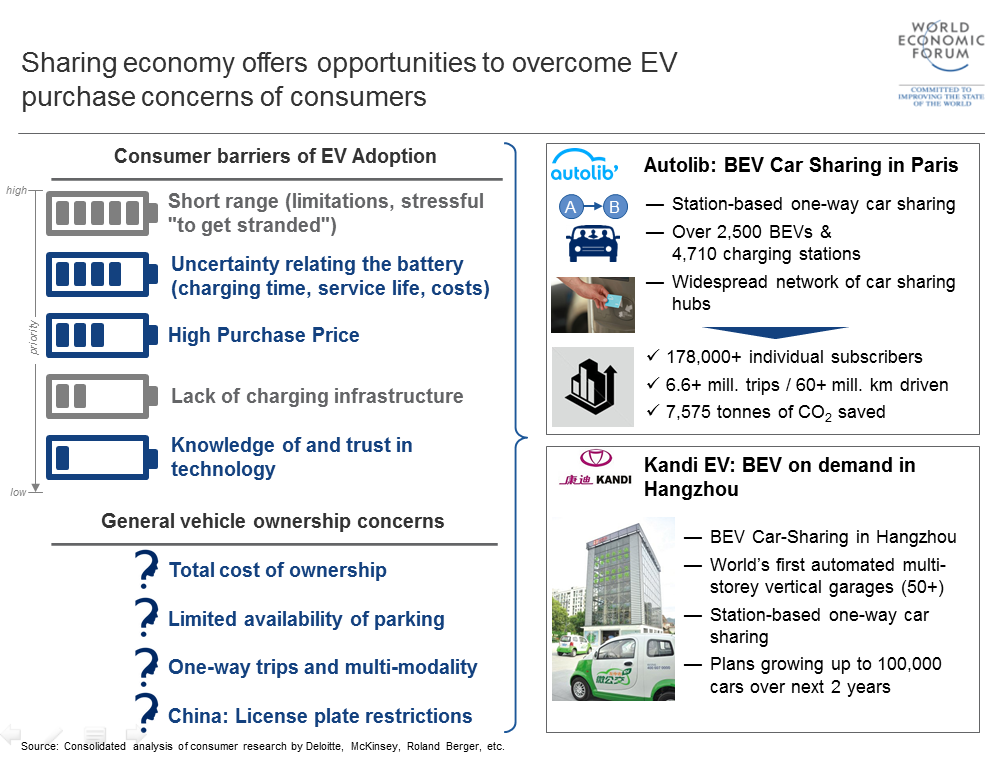 Leveraging transportation as a service must be considered as a further lever to boost the public acceptance of NEVs. Especially “digital natives” born after 1980 and accounting for 49% of the current Chinese population, who are open to new forms of mobility like car- and ride-sharing. 69% of the so-called Generation Y in China like using a smartphone app to plan transport and 61% would use car rental services if they were easily available.

Successful implementations like Kandi EV (BEV car sharing in Hangzhou targeting to growing up to 100,000 cars over the next two years) highlight acceptance of the sharing approach. The major reason behind this is the elimination of the biggest purchase barriers. Sharing customers don’t have to worry about the uncertain battery life, high purchase price, license plates, and limited parking slots. And they can also take advantage of one-way trips, multi-modal mobility and transparency in costs.

To speed up the NEV sharing economy, public-private collaboration is essential at both city and national level. The prospect of autonomous driving combined with the development of the electric drive-train heralds a new era of transportation services with enormous societal, environmental and economic benefits.

We can do more today to increase preparedness, reduce impacts, and support a resilient recovery around climate disasters, says the President of the World Bank.