How are energy subsidies calculated?

In their blog, Ben Clements and Vitor Gaspar make the points that global energy subsidies are still very substantial, that there is a strong need for reform in many countries, and that now is a great time to do it. This blog sets out what we mean by “energy subsidies,” provides details on their estimation, and explains how they continue to be high despite the recent drop in international energy prices (Chart 1).

Our latest update of global energy subsidies shows that “pre-tax” subsidies—which occur when people and businesses pay less than it costs to supply the energy—are smaller than a few years back. But “post-tax” subsidies—which add to pre-taxsubsidies an amount that reflects the environmental, health and other damage that energy use causes and the benefit from favorable VAT or sales tax treatment—remain extremely high, and indeed are now well above our previous estimates.

While pre-tax subsidies have fallen, the efficiency costs of failing to charge for environmental and other damage and secure a contribution to revenues are even larger than we previously thought. So the urgent need for energy price reform—in a wide range of both advanced and developing countries—remains. Low international oil prices have not made the problem go away. But they provide a great opportunity to move towards more efficient pricing of energy.

In an earlier study, the IMF estimated that global pre-tax subsidies amounted to US$492 billion (0.7 percent of Global GDP) in 2011, with nearly half of this attributable to a few oil-exporting developing economies. That study also introduced the broader concept of post-tax subsidies simply recognizes that:

So, think of the failure to price accordingly as a form of subsidy. Indeed such estimates have now come to be widely used, including in a recent paper by the European Commission.

Estimating post-tax subsidies involves measuring and valuing environmental damages that are often uncertain and very country-specific, as well as needing to place some monetary value on human life.

In 2013, when we first made our estimates of post-tax subsidies, we estimated post-tax subsidies for 2011 at a striking worldwide total of around US$2.0 trillion (2.9 percent of global GDP). Importantly, they were estimated to be widespread across both advanced and developing economies, underscoring the need for energy price reform worldwide.

At that time, however, very little was known about the magnitude of environmental damages from fossil fuel consumption on a country-by-country basis. That study simply extrapolated from just three available studies (for the United States, the United Kingdom and Chile). Now, we incorporate the more refined estimates of environmental damages for fossil fuel products from a recent IMF book. We also update price, consumption and income data. 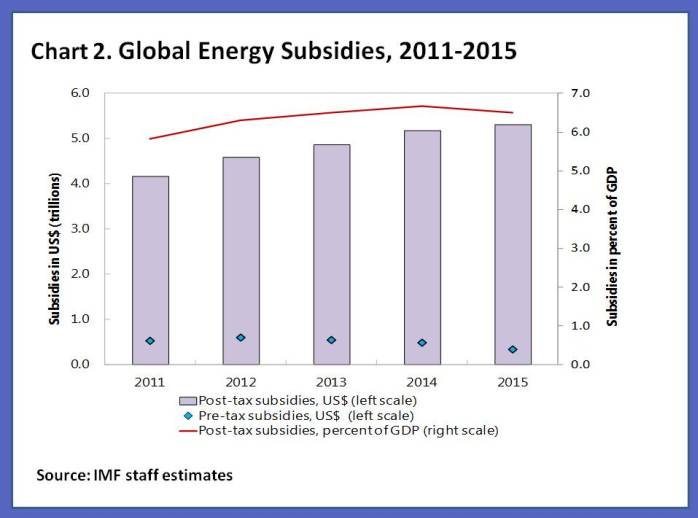 This significant increase of the post-tax subsidies from those we previously estimated for 2011 can be explained as follows:

Importantly, the revenue gain from energy price reform will be substantially smaller than these estimated subsidies, because firms and households would cut their energy consumption and adopt emissions control technologies if energy prices were to be raised. Allowing for such responses as best we can, we put the revenue gain from eliminating post-tax subsidies in 2013 at US$3.0 trillion (4.0 percent of global GDP) and project it to be nearly US$2.9 trillion (3.6 percent of global GDP) in 2015. This is a very substantial fiscal dividend that could be used for growth-enhancing tax cuts on labor and capital or badly needed investments in basic education and health.

At the same time, energy price reforms substantially reduce the need to subsidize renewable energies and are the most effective policies for promoting opportunities to mitigate environmental impacts across the economy.

Image: An attendant prepares to refuel a car at a petrol station in Rome January 4, 2012. REUTERS/Max Rossi.