How can we finance the new sustainable development goals?

After an extended period of economic stagnation and instability throughout the final quarter of the 20th century, the group of 60 low-income developing countries (LIDCs) started registering high and sustained growth. Over 2000-13, the average real GDP of LIDCs grew by more than 6% per year, fuelled by an expansion of the labour force and public and private capital accumulation (IMF 2014). Notwithstanding the recent surge in public investment, most LIDCs still face severe infrastructure gaps, and tackling poverty and promoting inclusive growth will require substantial financial resources.

More broadly, financing a transformative post-2015 development agenda, which promotes sustainable development, embracing concepts of environmental, social and economic sustainability, will require policies and innovative financing that goes beyond current resources and domestic revenue mobilisation.  Estimates of how much funding would be required to meet the needs for the Sustainable Development Goals (SDGs) in developing countries vary, but are in the order of billions and trillions.  World Bank estimates suggest that eliminating infrastructure bottlenecks in sub-Saharan Africa will require public investment of US$93 billion per year (Foster and Briceno-Garmandia 2009), other estimates suggest incremental investments of $2-3 trillion per year to meet the SDGs (Schmidt-Traub and Sachs 2015).  New and traditional mechanisms to catalyse additional long-term financing from official and private sectors to finance the SDGs and to scale up investment in physical and social infrastructure in LIDCs will be at the centre of the discussion of the third International Conference on Financing for Development on the post-2015 development agenda, which will be held in Addis Ababa on July 13-16. Among researchers and policymakers there is an emerging consensus that:

The most recent OECD data confirm the decline of aid flows to low-income countries. Financing needs will have to be fulfilled by domestic resource mobilisation and private flows. With respect to domestic resource mobilisation, local currency debt markets in Africa are still very shallow especially for longer-dated maturities (Bua et al. 2014), but recent years have seen a number of governments mobilising resources by placing long-term marketable debt. At the international level, a growing number of LIDCs have started issuing sovereign bonds in the international capital markets. In 2014, Côte d’Ivoire, Ghana, Kenya, Senegal, Vietnam and Zambia issued bonds totalling about $7 billion (Figure 1, see also Presbitero et al. 2015). FDI flows to LDICs have also grown rapidly, for some frontier markets at rates similar to those of the larger emerging markets (Araujo et al. 2015), and their volumes are now close to official assistance flows. Overall, since 2011 gross capital inflows to LIDCs have overtaken official development assistance as the main source of external finance (Figure 2). 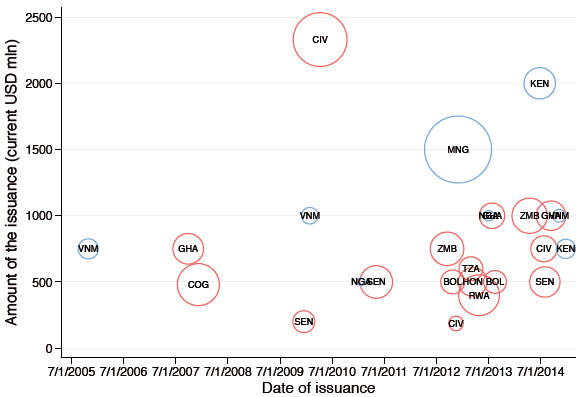 Note: Based on a sample of 36 LIDCs. The sample is motly balanced. All countries have at least 7 observations.
Source: Data from Financial Flows Analytics dataset (IMF) and World Development Indicators

The Heavily Indebted Poor Countries (HIPC) initiative launched in 1996 and Multilateral Debt Relief Initiative (MDRI) launched in 2005 have been successful in drastically reducing the external debt of many LIDCs. However, debt sustainability concerns remain, in part because of rising non-concessional sovereign borrowing, including off-balance sheet guaranteed public-private financing initiatives, but also because non-traditional lenders have been operating outside the guidelines of the World Bank and IMF-led debt sustainability framework. China has become one of the main players and in a third of sub-Saharan African countries, Chinese aid represents more than 10% of total ODA flows (Figure 3). Chinese aid often finances infrastructure projects and does not seem to be more politically motivated than aid provided by most western donors (Dreher and Fuchs 2012). However, several apparently concessional flows require hard-to-predict repayments in terms of natural resources. Moreover, Chinese aid seems to favour a narrow set of constituencies politically close to African leaders (Dreher et al. 2015).

Figure 3. The relevance of China with respect to traditional donors

Note: Based on data available at OECD.Stat and at http://china.aiddata.org/

The design of the new architecture for development finance requires an analytical framework for identifying trade-offs and specifying the risks and opportunities related to each form of domestic and external finance. In particular, the framework should be able to provide indications on the mechanisms through which different financing options could affect local economies and their overall growth and fiscal stance, with a specific focus on preserving debt sustainability.

To have a better sense of the mechanisms and the causal effects, there is a need for a stronger and broader use of micro-data to answer macroeconomic questions. Recent papers go in this direction using project-level data to revisit the old debate on aid effectiveness, narrowing the analysis at the regional level (Dreher and Lohmann 2015), or to assess whether there are absorptive capacity constraints when scaling-up public investment (Presbitero 2015). Similarly, investment-level data could help shed light on the mechanisms through which private capital flows can affect local economies and have spillover effects from source to recipient countries. Finally, loan-level data could help identify the transmission of monetary policy to the real sector (Abuka et al. 2015).

When world leaders meet in Addis Ababa in July, there will be a call for more financial flows to LIDCs. However, there is still much that we do not know about how these flows operate and what works and what does not, and how policies at the national and international levels can help steer best outcomes.

More money may help, but may also make things worse by creating aid dependence, Dutch disease, or unsustainable debt. The political discussion needs to be accompanied by more and better data and research on how financing can support sustainable development.

Authors’ note: The views expressed herein are those of the author and should not be attributed to the IMF, its Executive Board, or its management.

Dreher, A and A Fuchs (2012), “Rogue aid? On the importance of political institutions and natural resources for China’s allocation of foreign aid”, VoxEU.org, 27 January.

Dreher, A, A Fuchs, R Hodler, B C Parks, P A Raschky and M J Tierney (2015), “Aid on Demand: African Leaders and the Geography of China’s Foreign Assistance”, AidData Working Paper No. 3.

Presbitero, A F (2015), “Too Much and Too Fast? Public Investment Scaling-up and Absorptive Capacity”, IMF Working Paper, forthcoming.

1 These are the main takeaways of a recent conference on Financing for Development jointly organised by the International Monetary Fund and the Centre for Finance and Development at the Graduate Institute, Geneva and funded by the UK Department for International Development. A selection of papers from the Conference will be published in the “Financing for Development” issue of the Oxford Review of Economic Policy, volume 31(4), October 2015, edited by Christopher Adam, Ugo Panizza, Andrea F. Presbitero and David Vines.

Author: Christopher Adam is Professor of Development Economics at the University of Oxford, UK and Research Associate of the Centre for the Study of African Economies. Ugo Panizza is a professor of international economics and Pictet Chair in Finance and Development at the Graduate Institute, Geneva. Andrea F. Presbitero (PhD Università Politecnica delle Marche, MA University of Sussex) is Economist at the International Monetary Fund (IMF) and Assistant Professor (on leave) at the Università Politecnica delle Marche (Italy). David Vines is Professor of Economics in the Economics Department, Oxford University, and a Fellow of Balliol College, Oxford as well as Director of the Centre for International Macroeconomics at Oxford’s Economics Department.

Image: The Pierre building is seen through a stairway as customers enter a store. REUTERS/Adrees Latif.

Cities have a major role to play in the race to reach net zero – and plans must include decarbonising existing infrastructure. Here's how they can do it.

How can we mitigate the flood risks to subway systems?

Klaus Hans Jacob, a geophysicist and flood expert, explains the flood risk to underground transportation systems and what planners and engineers can do.

How to ensure no one is left behind by infrastructure development

What ants can teach us about engineering

This company has delivered the world's first fossil-free steel