What is happening in the global oil market?

Oil prices went from over $110 per barrel in mid-2014 to below $50/b at the beginning of this year. Collapsing prices have hurt oil exporting countries while giving an economic boost to the consumers of energy. These direct consequences have been felt for a while. And now that oil prices have recovered a bit, the worst (and best) of the economic impact might be over. It is time to think about the more fundamental forces that will be shaping global oil markets going forward.

Traditionally, when oil prices dropped too fast or too far, OPEC – the oil cartel that has been active since the 1960s – would step in and cut production. Reduced supply would, in due course, stabilise markets and make production for everyone more profitable.

At the last OPEC meeting in November 2014, when prices had already dropped by over a third from previous peaks, OPEC decided to keep pumping. While some of the smaller producers appeared anxious to cut output, Saudi Arabia – traditionally the oil world’s swing producer – sat back and watched prices fall further. A few weeks after the meeting, Saudi Oil Minister Ali al-Naimi famously declared that it was “irrelevant” whether the price went down to “$20, $40, $50, $60” per barrel. 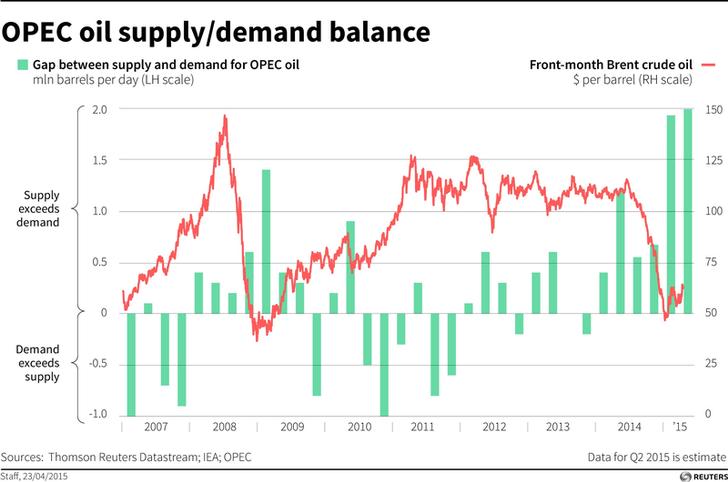 All manner of speculation has ensued. Some argue that Riyadh wants to use low oil prices to hurt its rivals, notably Iran and Russia and thus gain regional predominance. Others think that Saudi Arabia is seeking to push prices lower to put the more expensive US fracking industry out of business.

But America’s unconventional oil industry – in large parts composed of nifty, tech-savvy upstarts – reacted swiftly to cut costs and make itself more efficient. With prices stabilising, they could ramp up production again soon. Against this background, it might seem to Saudi Arabia that for each barrel it takes out of the market, another producer steps in to make a buck. Production cuts would thus mean both less revenue and a shrinking market share.

Saudi Arabia can afford lower prices, first because it pumps oil extremely cheaply and second because it still sits on $700 billion of cash reserves. But many other OPEC producers are not so lucky. Some are signalling that they want to get serious about production cuts. Saudi Arabia, on the other hand, has actually been increasing production of late. Does that mean that OPEC is splitting? The oil minister of hydrocarbon-rich Oman (itself not an OPEC member), Mohammed bin Hamad Al Rumhy, predicts that the cartel’s days are numbered. “Saudi Arabia produces one third of OPEC’s oil”, he argues. “That means that two-thirds of OPEC’s oil are produced by the other members.” And these other members, he argues, will now be sorely tempted to go it alone.

However, the other 11 OPEC countries are not a monolithic bloc. Some have as much breathing space as the Saudis while others have their backs against the wall. Whether this group could muster the discipline to enforce a production-cut agreement without its dominant member on board remains an open question.

Now that the Saudis appear to have adopted a more hands-off approach, will someone else take over the role of balancing the global oil market? Most eyes are on the US, where oil output has increased by over 60% since 2009. In volume terms, this recent increase in US oil production is bigger than the entire output of 11 of the 12 OPEC countries. With that, the US could become the new swing producer.

However, while in Saudi Arabia the production level is determined by the government, in the US it is the outcome of decisions made by thousands of energy companies. “In the past, if you wanted production up or down, you knew who to call in Saudi Arabia”, says Amos Hochstein, US special envoy for international energy matters. “In the US you would need about 4,000 phone numbers of different oil producers. And I am not sure these calls would be very productive.” In other words, in the US it is market dynamics, rather than political strategy, that determines the number of barrels pumped.

Does this mean the global oil market will be less politicized going forward? This seems somewhat unlikely. Oil has always been the most politicised of commodities, not least because most of it is found under the soil of less-than-fully-democratic countries that relish using their energy wealth for political ends. The US is different – or is it?

Already, some analysts are musing whether the US might use its oil and gas to achieve international objectives. The government could, for example, be tempted to use the strategic petroleum reserve, which was originally set up after the oil price shocks of the 1970s,  to influence global market dynamics. Recent swings in the oil market have also fuelled a debate about whether the US government should lift the strict limits it imposes on the sale of oil and gas abroad.

That presupposes that already falling oil demand in rich countries is more than compensated by fast-growing demand in emerging markets. In China, the growth in oil demand is already slowing, as industry becomes more efficient and the government is putting restrictions on driving and other sources of noxious air pollution. India and other fast-growing nations are expected to take up some of the slack. On the other hand, as late-comers to industrialisation, they may have the opportunity to develop their economies with technologies that are less dependent on fossil fuels.

A few years back, many people were subscribing to the “peak oil” theory, according to which the world would soon run out of fuel. Today, it is more fashionable to talk about peak demand, the idea that the decoupling of growth from energy consumption means that oil demand could start falling as early as 2020.

Climate change adds further uncertainty over the long-term outlook for oil demand. Scientists and climate campaigners say that we must leave most fossil fuels in the ground to prevent global warming exceeding the 2 degrees that governments and experts consider bearable for the planet. If that warning was taken seriously, a lot of the world’s oil reserves would end up as stranded assets in the ground. For oil producers, it would then make sense to sell as many of their reserves now, even at low prices, since in a few decades there might not be a market for oil any more.

Many experts dispute that. But what most agree on is that the dynamics of global oil markets are changing in a fundamental way, and that we are only beginning to understand the ramifications. Prepare for a bumpy ride.

This article is based on a discussion at the FAZ-Munich Security Conference Energy Security Summit in Berlin, May 6-7, 2015.

Image: A pump jack and pipes are seen on an oil field near Bakersfield on a foggy day, California January 18, 2015. REUTERS/Lucy Nicholson. Infographics by Reuters Graphics

The war in Ukraine has exacerbated the global energy crisis and the IEA has outlined a 10-point plan to cut oil use. But to make it work, people and governments will have to make smart ch...

Africa’s economic growth is likely to fall this year because of surging food and fuel prices caused by Russia’s invasion of Ukraine, according to the IMF.

Russia is one of the world’s largest exporters of petroleum products - but what exactly are they?

The 1973 energy crisis sparked the idea for establishing the IEA. What have we learned since?