04 May 2015
World vs Virus Podcast
Listen now on Spotify

How to look after someone with coronavirus

China offers a prime example of export-led growth that has benefited from learning by doing and by adopting foreign know-how, supported by a complex industrial policy. Arguably, a modern version of mercantilism has been at work. The Global Crisis put an abrupt end to China’s export-led, high growth and large current-account surplus trajectory. In the US, the private sector was forced to de-leverage and lower demands for imports. Other crisis-hit developed countries also cut back on imports. Consequently, the Global Crisis and its aftermath induced rapid Chinese internal balancing, reducing the scope of future reserve hoarding. Since the Crisis, China’s current-account surplus fell from 10% of GDP in 2007 to 2% in 2013.

A legacy cost of Chinese policies during the 2000s is its skewed external balance. China’s been long on low-yielding foreign assets (mostly international reserves) and short on high-yielding assets (mostly large liabilities associated with past net FDI inflows). While China’s net external financial assets in 2013 was about 20% of China’s GDP, the real net return on these assets was negative (see Hanemann 2014). This reflects two fundamental factors:

The low return on Chinese foreign assets is bad news, especially considering the rapid ageing of China’s population. This is in contrast to Japan, where the sizable return on its foreign asset position helps in buffering the future income of its rapidly greying population.

A way of mitigating the adverse consequences of China’s legacy of external balance sheet exposure is external rebalancing, that is ‘swapping’ some of its international reserves with higher yielding foreign equities and outward Chinese FDI (e.g. Shotter 2014). Indeed, China embarked on diversifying its holdings of dollar international reserves by channeling surpluses into a sovereign wealth fund, encouraging outward FDI in tangible assets, and offering much higher expected returns.2 The outcome has been growing FDI in the global resource sectors and infrastructure services, especially in commodity and mineral exporting countries, which includes developing countries and emerging markets in Africa and Latin America. In a way, China has joined the trend of other emerging markets.3

In Aizenman and Pasricha (2010), we point out that the selection criteria explaining the Fed’s supply of bilateral swap-lines to emerging markets were:

Chances are that similar factors account for the Chinese supply of renminbi bilateral swap-lines to a growing list of developing and emerging markets, as has been vividly illustrated by Garcia-Herrero and Xia (2015).4 This strategy blends very well with the trade internationalisation of the renminbi in the context of the broader outward FDI strategy of China, and is consistent with the channeling of China’s net foreign-asset position into an outward FDI-cum-credit strategy.

In our own work, we take stock of what may be the new chapter of Chinese-outward mercantilism, which is aimed at securing a higher rate of return on its net foreign asset position, leveraging its success in becoming the global manufacturing hub (Aizenman et al. 2015). We suppose that in the aftermath of the Global Crisis, China bundled outward FDI with its finance dealing (lending, swap-lines, trade credit), its trade and foreign investment (including exports of Chinese capital products and labour services), and leveraged its growing market clout.

This bundling strategy has been mostly applied to developing and emerging market economies, and to ‘commodity-countries’. During the Global Crisis and its aftermath, China rapidly increased its outward FDI, swap-lines, imports and exports to selected countries. Such a bundling strategy is consistent with Adams and Yellen (1976) – bundling as a manifestation of market clout in which the bundling party leverages its market powers aimed at increasing its surplus. Accordingly, China may use its market power in the provision of ‘swap and lender of last resort’, supplying capital goods and infrastructure services to its trading partners.

The influence of renminbi swap-lines is especially large on the Chinese-outward FDI in the natural resources sector. The overall findings support the notion that in the aftermath of the Global Crisis, Chinese-outward FDI is bundled with trade and financial linkages, thereby increasing the country’s influence in the international markets, and securing its long-run access to a stable supply of commodities.

Figure 1 shows a heat map of average Chinese bilateral trade, outward FDI, and renminbi swap-lines as a ratio of a recipient country’s GDP in the sample. Figure 2 overviews the relationship between Chinese FDI, trade, and swap-lines. The diamond chart plots – based on bilateral data – Chinese FDI, exports, imports, and swap-lines, all measured as a ratio of a recipient country’s GDP and weighted by the sample means. The dotted, dashed and solid lines plot the statistics before, during and after the Global Crisis (2008-2009), respectively. The diamond charts indicate concurrent and significant surges in Chinese-outward FDI, swap-lines, imports and exports to the selected countries. 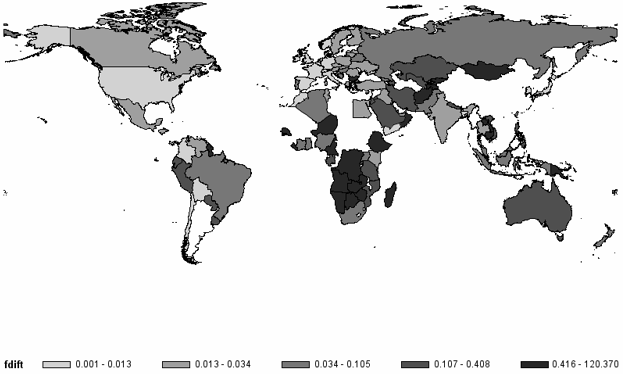 The diamond chart plots – based on bilateral data – Chinese FDI, exports, imports, and swap-lines, all measured as a ratio of a recipient country’s GDP, weighted by the sample means. The dotted, dashed and solid lines plot the statistics before, during and after the Global Crisis, respectively. The recipient countries are listed in Table 1.

Table 1. China’s top industry activities and investing companies in outward greenfield FDI before and after the Global Crisis. This table reports the largest capital investment by China in host countries from January 2003 to January 2015, based on the ‘fDi Intelligence database’ (a database run by the Financial Times).

The shortness of the sample we use and the lack of more detailed data do not allow us to evaluate the success of the bundling strategy in delivering higher returns to the Chinese net foreign asset position. The willingness of China to extend credit lines and invest in countries with a history of default – including Argentina, Venezuela, and Zimbabwe – raises concerns about the growing exposure of China to sovereign defaults and the risk of partial nationalisation of its outward FDI assets.

One should keep in mind, however, that some Chinese lending to commodity countries is secured by ‘in kind’ long-run payment in the form of oil flows and other commodities back to China.5 Arguably, Chinese outside exposure may be also partially hedged by the growing dependence of some developing countries on Chinese infrastructure services needed to maintain their upgraded rail system, the growing importance of China as the prime destination of their imports, and, for some, their dependence on China as their only ‘lender of last resort’.6

While it is premature to estimate the returns on this bundling strategy, the outcome has been markedly increased access for emerging African, Asian and Latin American countries to improved infrastructure services that are both co-financed and constructed with the help of Chinese capital goods and knowhow and co-paid by the growing exports of commodities and minerals to China. The proposed formation of the Asian Infrastructure Investment Bank, in which China would be the main shareholder, may well be viewed as a follow up of this bundling strategy.

How China’s COVID-19 recovery could bolster its global influence

Why lockdowns can halt the spread of COVID-19