Which Latin American nation is most competitive?

Chile is the most competitive economy in Latin America, according to the World Economic Forum’s Global Competitiveness Report 2014-2015. The country has a strong institutional setup (28th best in the world) with low levels of corruption (25th) and stable macroeconomics (22nd) despite some rigidities in its labor market that result from high redundancy costs (120th).

Panama comes top in Central America. The country boasts impressive infrastructure (40th) with some of the best port and airport (7th) facilities in the world. It is held back by low rankings for the functioning of institutions (74th) most notably in terms of corruption (94th) and the poor quality of education (83rd.)

Costa Rica boasts one of the best education systems in the region (21st) and does fairly well on the capacity to innovate (36th.) But poor transport infrastructure (108th), difficulty in accessing finance, and some concerns about its macroeconomic performance and high budget deficit (116th) are negatives.

Brazil benefits from its large market size and fairly sophisticated business community (47th) with pockets of innovation excellence (44th.)  But the country is marked down on persistent transport infrastructure weaknesses (77th) and a perceived deterioration in the functioning of its institutions (104th) and perceptions of corruption (130th).

Mexico’s deep internal market allows for important economies of scale (10th) and the country has reasonably good transport infrastructure (41st) plus a number of sophisticated businesses (58th.) But Mexico suffers from poor perceptions on the functioning of institutions (102nd), the quality of education, and its low level of ICT uptake (88th.) 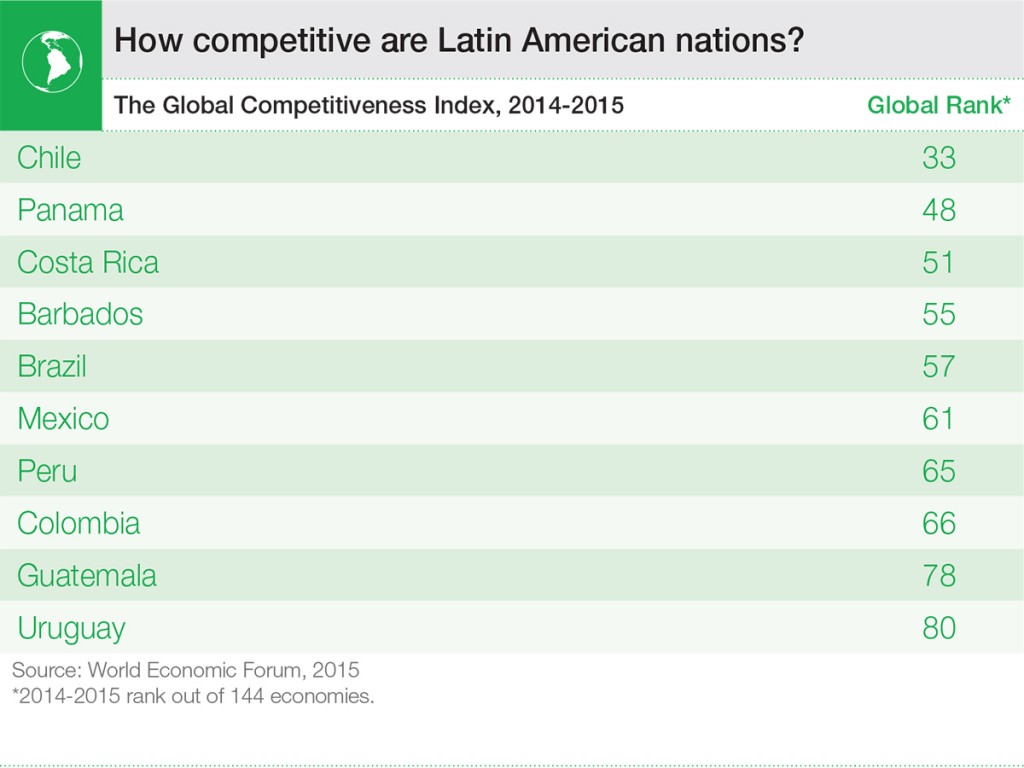 Image: Female dock workers talk and prepare for their shifts at the port of Valparaiso city. REUTERS/Eliseo Fernandez

How a different kind of investment could transform Latin America

The pandemic is ravaging Latin America, but it also offers an opportunity to transform the region. Here's how the financial sector can help with ESG investing.

What can COVID-19 teach us about building sustainable health systems in Latin America?

Latin America has been hit hard by COVID-19 - but the crisis has shown the way forward for the region's health systems, too. Here are three areas to focus on.