Why austerity was the wrong policy for the UK, part 2

Niall Ferguson begins his rejoinder to my rejoinder to his interpretation of the results of the United Kingdom’s recent general election by citing an apocryphal Keynes quote: “If the facts change, I change my opinion. What do you do, sir?” But should the fact that the British economy grew last year by 2.6% have caused Keynesians to change their minds? Would it have caused Keynes to rewrite his General Theory of Employment, Interest and Money?

Ferguson seems to think so. I do not.

Keynes never thought that an economy, felled by a shock, would remain on the floor. There would always be some rebound, regardless of government policy. What he emphasized was the “time-element” in the cycle. With depressed profit expectations, an economy could remain in a semi-slump for years. There would be alternating periods of recovery and collapse, but this oscillation would occur around an anemic average level of activity.

Neither the suddenness of the financial collapse of 2008-2009 nor the sluggishness of the recovery since then would have led Keynes to change his mind; nor has it discredited the claims of today’s Keynesians. While Ferguson includes several quotes from my past commentaries, he omits a very important passage: “All economies recover in the end. The question is how fast and how far.” The task of government was – and remains – to strengthen whatever “natural forces” of recovery exist, if necessary by providing businesses with a larger market, and, beyond this, to offset the inherent volatility of private investment through a stable program of public investment.

For starters, there is his view of the impact of austerity on Britain’s GDP. He cites the 2.6% growth in 2014 as a measure of austerity’s success. But this is nonsense. The real question is what austerity did to the economy over the five years of George Osborne’s tenure as Chancellor of the Exchequer. It is now widely agreed that, far from speeding up the recovery, Osborne’s austerity policy prolonged the slump: Simon Wren-Lewis of Oxford University has pointed out that UK austerity was at its “most intense” in the first two years of Osborne’s chancellorship (2010-2011). The UK Office of Budget Responsibility, using conservative multipliers, calculated that austerity in this period reduced GDP growth by 1% in each year. That was the basis of Wren-Lewis’s calculation that austerity cost the average UK household the equivalent of at least £4,000. The economic recovery after 2012 coincided with the cessation of fiscal tightening.

Of course, coincidences are not causes. Keynesians cannot prove that the start of austerity aborted the recovery in 2010; that recovery would have come sooner if the pre-austerity level of public spending had been maintained; or that it was the reduction of austerity in 2012 that enabled the economy to expand again.

Nonetheless, the facts are consistent with Keynesian theory. Keynesians said austerity would cut output growth. Output growth fell. “[T]he Keynesians’ comparisons with the Great Depression [of 1929-1932] were plainly risible,” wrote Ferguson. In fact, real per capita GDP has taken longer to recover this time around. While it regained its 1929 level five years later, today, it is still below the 2008 level and looks as though it will take eight or nine years to regain it.

Keynesians also predicted that austerity would make it harder, not easier, for Osborne to hit his fiscal targets. Osborne said he would eliminate the structural deficit and have the debt/GDP ratio falling by 2015. Five years on, Osborne has failed to liquidate the deficit, no matter how you define it, and the debt/GDP ratio has risen from 69% to 80%.

Unlike Ferguson, Keynesians have a theory to explain why the targets were missed: If fiscal tightening makes the economy smaller than it would have been otherwise, it is much more costly to balance the books; and the attempt is likely to be abandoned or suspended for fear of social and political consequences. This is precisely what happened.

As a historian, Ferguson must know that it is growth, not austerity, that is most conducive to reducing the national debt as a share of GDP. Consider the following: 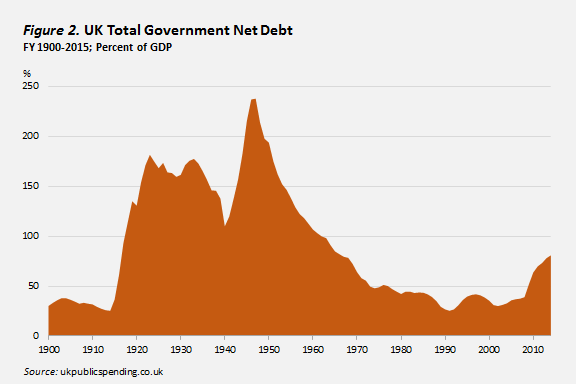 In 1929, the UK’s national debt was higher than it had been when World War I ended, despite (or because of) eight years of fiscal austerity. Conversely, from 1945 to 1970, the national debt shrank from 240% of GDP to 64% after 25 years of economic growth, most of it “real” (inflation-adjusted). Likewise, Paul Johnson, Director of the Institute for Fiscal Studies, said in December 2014 that it was not for lack of effort that the fiscal deficit had not fallen further. Rather, it was “because the economy performed so poorly in the first half of the parliament, hitting revenues very hard.”

The Keynesian argument, in sum, is that austerity hit the economy, and by hitting the economy, it worsened the fiscal balance. Does Ferguson accept this? If not, why not?

One of Ferguson’s key arguments is that austerity was necessary to restore confidence. Apparently, the bond markets did not agree. Long-term nominal and real interest rates were already very low before Osborne became chancellor, and they stayed low afterwards. The government could have taken advantage of this to borrow at negative real rates to invest, as all Keynesians advocated. It refused to do so.

In the Financial Times commentary to which I was responding, Ferguson wrote: “…at no point after May 2010 did [confidence] sink back to where it had been throughout the past two years of Gordon Brown’s catastrophic premiership” (my italics). But a graph that Ferguson himself posted gives the lie to this assertion: 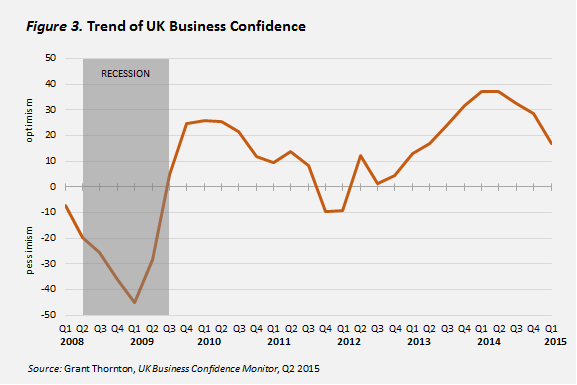 This shows confidence increasing from the low point of -45.3 in the first quarter of 2009 (the trough of the slump) to +25.8 in May 2010. It then went down, and did not regain its May 2010 level until the third quarter of 2013 – an interval of three years. In other words, contrary to Ferguson’s assertion, business confidence was higher in the last six months of Brown’s premiership than in the first two years of Osborne’s chancellorship.

In his Financial Times commentary, Ferguson cited the UK’s post-crash earnings and employment performance as proof that “austerity works.” “UK unemployment is now 5.6%, roughly half the rates in Italy and France,” he gushed. “Weekly earnings are up by more than 8%; in the private sector, the figure is above 10%. Inflation is below 2% and falling.”

Take earnings first. To show nominal earnings over five years side by side with inflation over one year is sleight of hand. After a correction from Jonathan Portes, Director of the UK’s Institute of Policy and Economic Research (and after first denouncing the correction as “contemptible”), Ferguson conceded in his Project Syndicate rejoinder that “from 2010 to 2015, average inflation-adjusted weekly earnings fell more than under any postwar government.”

Quite simply, with inflation rising faster than nominal wages, average real wages have fallen, and employment has grown, as standard theory would lead one to expect. The combination of tight fiscal policy and loose monetary policy failed, until 2013, to produce a recovery in output. It did, however, lower the unemployment cost of reduced output – though not entirely: if the rise in involuntary part-time work is included in the cost, and as David Bell and David Blanchflower have done with their “underemployment index,” the UK government’s employment record is worse than Ferguson claims. 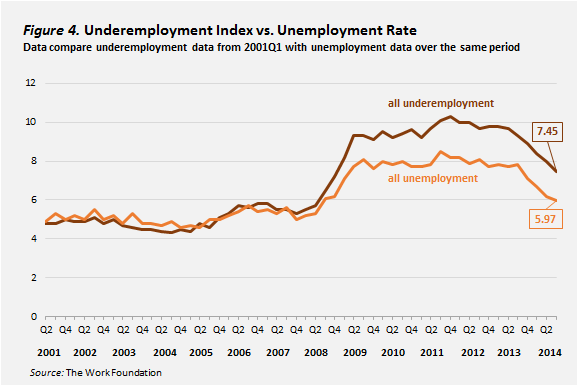 There was another cost to the relatively low unemployment of the recent recession, which Ferguson does not even mention: the collapse of productivity. 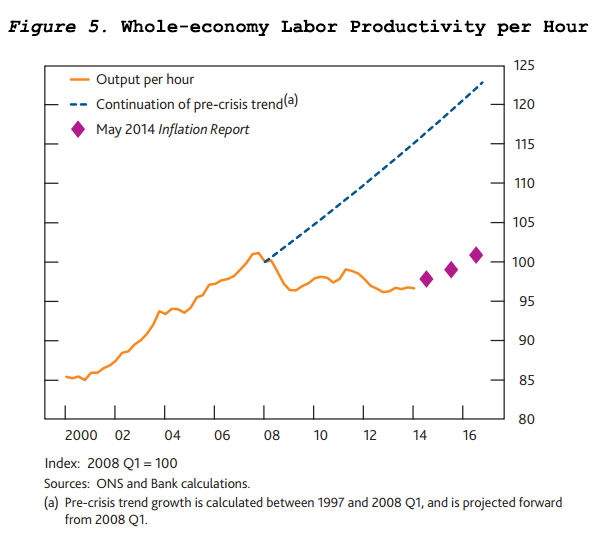 This is contrary to previous slump experience, when labor-shedding produced a rise in productivity. The explanation is probably to be found in the way the labor market has adapted to government policy. A recent report by the UK’s Trade Union Congress (TUC) argues that austerity “has led directly to weaker economic growth, not only in the UK but across the world.”

In the UK, according to the TUC, “the reduction in growth has been met (almost) entirely by lower earnings growth rather than lower employment growth….Many new opportunities have been concentrated in low-pay occupations, and there has been an associated increase in underemployment, involuntary part-time work, poor quality self-employment and temporary work alongside greater insecurity through zero-hours contracts, agency work and other insecure or short- term contracts.” Lower productivity “follows simply as an arithmetic consequence of this adjustment, with lower economic growth set against ongoing growth in the employment headcount.”

The austerity debate is of more than parochial British interest. Fiscal austerity remains the reigning orthodoxy in the eurozone. With soaring private-sector and household debt, the current global recovery looks very shaky, so it is important to attempt an accurate audit of the policy responses to the last collapse before the next one occurs.

Ferguson is right that everyone should learn from experience. Keynesians cannot expect to have it all their way. Demand-side policies should be coupled with supply-side measures to improve skills, infrastructure, and access to finance, and Keynesians have been slow to understand that a government cannot increase the national debt without limit for a cause in which most people do not believe.

But it seems to me that Ferguson is more interested in making political points than in developing properly grounded arguments. Until he tells us why he thinks that austerity was a good thing, his critics will be forgiven for seeing his economic pronouncements as nothing more than political propaganda.

Global debt has risen to dangerous levels. Here’s what needs to be done