One hundred million. That is the number of women in Latin America who are currently active in the formal labour force; more than half of the women of working age. These are women who were once dependent on men and who now have more control over their economic fate and that of their children. This is one of the most dramatic social changes in the history of the region: a female power revolution. And the number will continue to rise, as transformation and empowerment continues.

The new millennium heralded this turning point in Latin America and the Caribbean. Between 2000 and 2010, women’s labour participation grew by 15% and played a major role in per-capita income growth and poverty reduction in the region. In most countries, women’s participation in the workforce is now above 50% – something unfathomable in the not-so-distant past.

The growth of women’s income in Latin America has reduced the level of extreme poverty by 30%. Evidence shows that women spend a higher percentage of their income on education, health and proper nutrition for their households, significantly reducing the legacy of poverty. 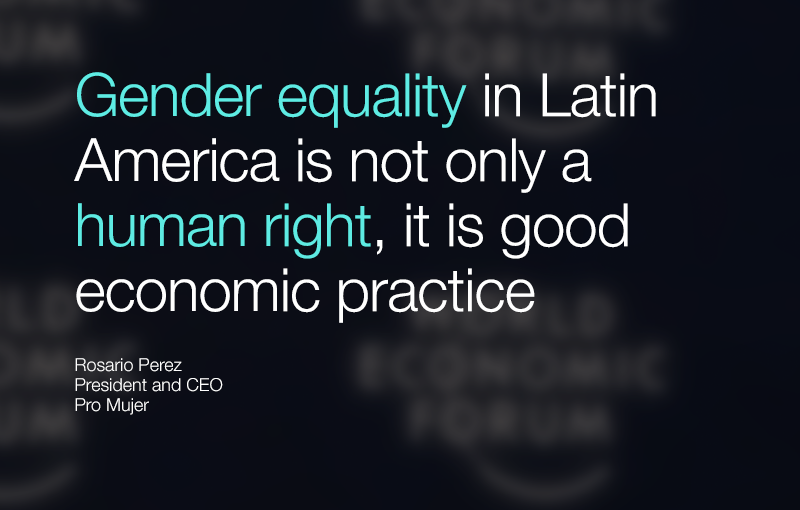 It has also created significant income inequalities among women themselves. Labour participation among women with the highest income is nearly twice that of those with the lowest. Poorer women have an unemployment rate that is five times higher than women with higher incomes, threatening a “feminization” of poverty.

The data masks the deep inequities suffered largely by poor women, many of whom are indigenous, and who carry disproportionate responsibilities for their families. They are, for the most part, left out of the formal economy, and work in lower-earning jobs without safety nets. Many sell their wares in traditional urban markets and work in domestic service, for example.

Women work two-thirds of the world’s working hours, but earn only 10% of global income and own less than 1% of the world’s wealth. In Latin America the situation is more extreme, as the region is the most unequal in terms of income. How can we encourage women to participate more in the labour force, something that would have a positive impact on the region’s economies. How can we create more and better jobs for women? How can we stop the undervaluing of women’s work?

For one, we must help women now and not wait for policies to change. One way to do this is to support women who are in the informal sector. The development organization Pro Mujer has learned that giving women credit, financial literacy, healthcare (both reproductive and preventative) and training in business and empowerment is a good approach. We found that women who benefit from this multi-layer approach can thrive and, in a single generation, lift their families out of poverty and a constant state of emergency to a stable, successful and healthy way of life. Pro Mujer has 2,000 field staff in Mexico, Nicaragua, Peru, Bolivia and Argentina – 70% of them women, and many of them former Pro Mujer clients who saw their lives transformed.

Governments must set policies that ensure equality and economic inclusion for women; they must create protection for poor people, eliminate gender-related wage discrimination and foster education for lower-income families. They must fold the informal sector into the formal through policies that promote jobs for all.

Women and their talent can drive the well-being of economies. Gender equality in Latin America is not only a human right; it is good economic practice.

Image: A woman sells fish as another woman carries a baby at a market in in the shanty town of Ticlio Chico, Villa Maria del Triunfo, on the outskirts of Lima, Peru, March 13, 2014. REUTERS/Mariana Bazo

Joy McBrien, herself a survivor of sexual abuse, set up an ethical fashion business 'Fair Anita' to help support women trying to escape domestic violence. Here’s how it works.

The Times Higher Education report on global university gender equality performance has found that women are still underrepresented in universities.

Explainer: How gender inequality and climate change are interconnected

The unsanitary truth about period poverty – and what governments can do