Do people buy more when they expect higher inflation?

From the Great Recession to the present day, policymakers around the world have been arguing about which policies may increase aggregate demand and bring the economy back to its steady-state growth path. The major problem is that conventional policies – such as lowering nominal interest rates – are not in the policy toolbox because rates have hit the zero lower bound (Bernanke 2010, Blanchard et al. 2010). Macroeconomic theory suggests that managing inflation expectations may be a useful policy measure: higher inflation expectations would lower the real interest rates in times of fixed nominal rates (the Fisher equation), and lower real rates would stimulate consumption (the Euler equation). Surprisingly, there has been no evidence in micro data thus far that these intuitive channels may indeed spur the readiness of households to spend. If anything, the current literature suggests no effect of inflation expectations on readiness to consume (Bachmann et al. 2015).

In a recent paper, we use novel and unique German micro-level data from January 2000 until December 2013 (D’Acunto, Hoang, and Weber, 2015) and find that inflation expectations are positively associated with the readiness to spend on durable goods.

Figure 1 documents this result in a time series scatter plot.1 Our data set asks a representative sample of 2,000 households every month whether it is a good time to purchase durable goods given the current economic conditions. Higher values correspond to better times. The survey also asks how consumer prices will evolve in the next 12 months compared to the previous 12 months.2Figure 1 plots the average monthly readiness to purchase durables against the average monthly inflation expectations. Inflation expectations and readiness to spend on durables are strongly positively correlated. Temporarily higher inflation expectations indeed stimulate current consumption spending.

The data also include a rich set of individual characteristics of respondents, including detailed demographics, expectations about household- and economy-wide future economic outlook, and perceptions about the evolution of economic outcomes in the past. We find3 that households that expect inflation to increase in the following 12 months are 8% more likely to be willing to buy durable goods, compared to households that expect inflation to be stable or decrease in the following 12 months.

Figure 1. Readiness to spend on durables and inflation expectations 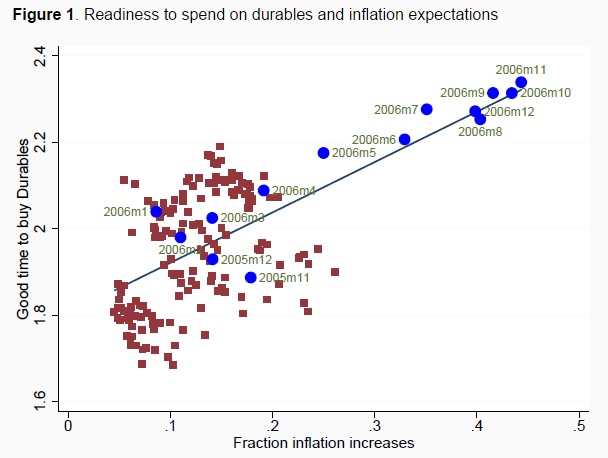 The richness of the individual characteristics in the data also allows us to study the heterogeneity of the effect of inflation expectations on the readiness to consume across several dimensions. We find that the effect is significantly stronger for the more educated heads of household, for higher-income households, for households living in larger cities, and for working-age heads of household.

The heterogeneity in the response of households to policy measures emphasises a challenge for fiscal and monetary policy makers: the intended effects of their policies should be clearly stated, and the types of households that seem less responsive to these measures – that is, lower-income, lower-educated, and retired households, living in rural areas – should be targeted with specific communicative efforts so that the policy measures indeed deliver their full potential.

Observing detailed household- and economy-wide characteristics helps to control for the heterogeneity across households when estimating our effect. But the analysis thus far does not allow us to claim that the effect of inflation expectations on the readiness to consume is causal. Ideally, we would need a shock to inflation expectations which is exogenous to the characteristics of households, and which only affects a group of treated households.

To get close to such an ideal experiment, we exploit a natural experiment. In November 2005, the newly formed German government unexpectedly announced a three-percentage-point increase in the VAT, effective January 2007. The narrative records show that the VAT increase was not legislated for reasons related to future economic conditions, but to consolidate the federal budget. The announcement of the VAT increase was an unexpected shock to German households’ inflation expectations, and should have resulted in higher consumption expenditure as long as nominal interest rates did not increase sufficiently to leave real rates constant, which is exactly what is suggested by the narrative records on the European Central Bank decision-making process.

Figure 2. Inflation expectations and readiness to spend on durables: Germany vs. foreign countries

Figure 2 shows that the trends of both average inflation expectations and average readiness to spend on durables were similar for German and foreign households before November 2005, which is 14 months before the start of the VAT increase. We construct a difference-in-differences identification strategy. We compare the outcomes of German households to those of foreign households, both before and after the VAT tax increase shock. To run the analysis at the household level, we match German households with similar foreign households before the announcement of the VAT increase in November 2005. The matching is based on the propensity score to be treated with the shock, estimated with a set of observables that are homogenously elicited across households in various countries through the harmonised questionnaire from the Directorate General for Economic and Financial Affairs. We test formally that, after the matching, German and foreign households are indistinguishable across the matched observables.

In January 2006, that is, 12 months before the announced VAT tax increase, German households are 3.8 percentage points more likely to declare that it is a good time to purchase durable goods after the announcement compared to before, and compared to the matched foreign households. Interestingly, we find that the effect builds up over time in 2006. Figure 3 shows the size of the monthly estimated effect over time.

The effect increases in magnitude throughout 2006 and peaks at 34 percentage points in November 2006. The average treatment effect drops to zero in January 2007 once VAT actually increases and higher inflation materialises. Interestingly, we do not detect any reversal of the positive effect of the VAT shock on the willingness to purchase durable goods after January 2007. German households behave similarly in their purchasing propensities to matched foreign households not exposed to the shock before the announcement of the VAT increase but also after the actual increase.

Figure 3. Change in the readiness to spend on durables: German vs. foreign households

At the same time, a growing literature stresses the use of fiscal policy to stimulate demand in times when conventional monetary policy is less effective. Farhi and Werning (2013) show theoretically that fiscal multipliers are large and above one during a liquidity trap. The central mechanism in their paper is that government purchases lead to higher inflation, lower real interest rates, and therefore more consumption today. Feldstein (2003) already stressed earlier that discretionary fiscal policy does not have to rely on questionable income effects, but could fully operate through an inter-temporal substitution channel by increasing private incentives to spend: higher inflation expectations lead to more consumer spending today. The use of unconventional fiscal policy can therefore be expansionary and, at the same time, does not lead to higher budget deficits (Farhi et al. 2013).

Our findings offer direct empirical support for those theoretical papers and provide important implications for policymakers, especially for those coordinating the fiscal and monetary policies of countries that are still struggling to exit the Great Recession, such as Italy and Greece (e.g. Reuters 2015). A series of pre-announced VAT increases and a simultaneous reduction in income tax rates would result in a predictable increase in inflation without inducing additional uncertainty, would increase consumer spending today, and would not lead to higher budget deficits, all while keeping the total tax burden of households the same.

Fahri, E and I Werning (2015), “Fiscal Multipliers. Liquidity Traps and Currency Unions” in preparation for Handbook of Macroconomics Volume 2.

1 We use the confidential micro data underlying the GfK Consumer Climate MAXX survey.

2 We create a dummy variable that equals 1 when a household expects inflation to increase.

3 In a multinomial logit specification that controls for household-level heterogeneity.

4 We obtained access to the confidential micro-data for three countries (France, Sweden, and the UK) through national statistical offices and GfK subsidiaries.