For which global risks is sub-Saharan Africa least prepared?

For 10 years, the World Economic Forum’s Global Risks report series has looked at global risks and their potential manifestation on a global scale. Efforts to respond to global risks, however, are often undertaken at the national or regional level. To help guide policy-makers and those who engage in building regional resilience, for the first time the Global Risks 2015 report asked the Forum’s multistakeholder communities of leaders from business, government, academia and non-governmental and international organisations to identify three global risks for which their region is the least prepared.

The main global risks that respondents from sub-Saharan Africa believe their region is not well equipped to cope with are presented in the table below. For sub-Saharan Africa, this is most notably high structural unemployment and underemployment ‒ cited by over 30% of the respondents  ahead of food crises and the rapid and massive spread of infectious diseases. 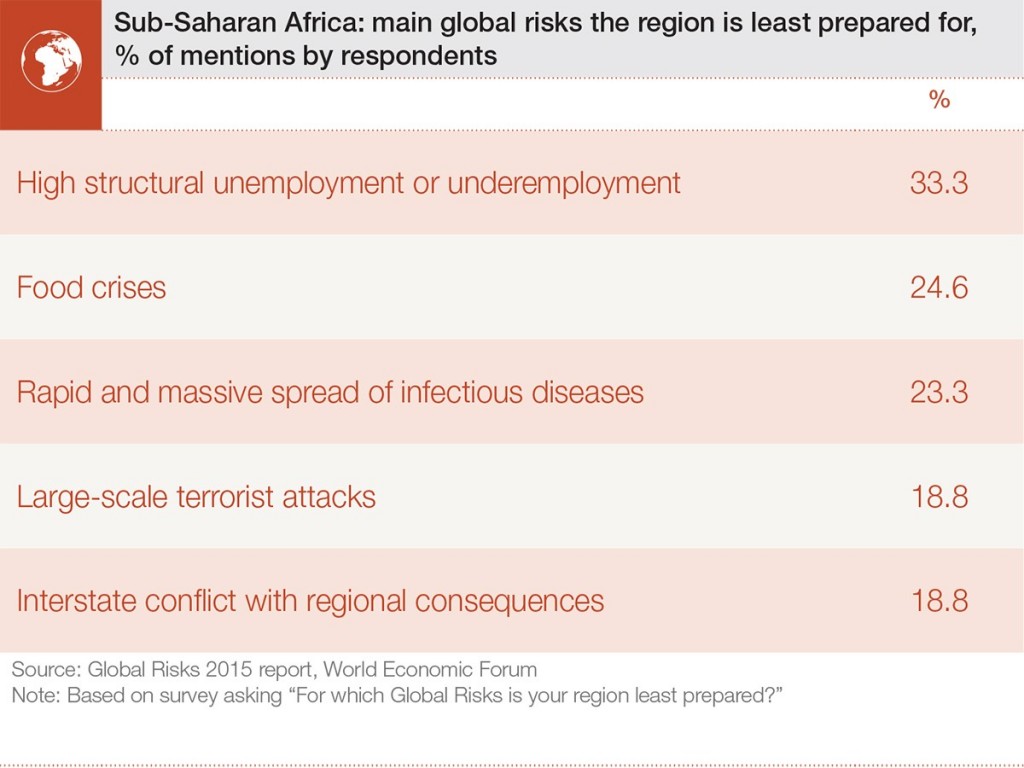 This is not surprising, given that the region hosts the world’s youngest population but lacks formal employment opportunities. On the one hand, rapid population growth offers an unprecedented opportunity in terms of a labour force and consumer group – indeed, the sheer dimensions of this trend are evidenced by recent estimates that show that, by 2035, the number of sub-Saharan Africans reaching working age (15-64) will exceed that of the rest of the world combined. The challenge, however, will be to create quality employment to reap the region’s demographic dividend.

More concretely, on average, about 18 million high-productivity jobs per year will have to be created by 2035; all the while, current productivity across all sectors of the economy (agriculture, manufacturing, services) remains low with no signs of improvement, as explored in the Africa Competitiveness Report 2015. Similarly, despite the high growth rates enjoyed by the region over the past 15 years, overall, drivers of competitiveness remain low as evidenced by weak institutions, an infrastructure deficit and, most critically, low levels of education, which forms a critical impediment to sustained growth, higher productivity and, ultimately, job creation.

An inadequately educated workforce is indeed high on the list of business leaders’ concerns in the region as shown by World Economic Forum’s executive opinion survey, and even in some more advanced economies in the region a skills mismatch is evident. Under the umbrella of the World Economic Forum’s Global Challenge on Employment, Skills & Human Capital, the Africa Skills Initiative convenes the Forum’s multistakeholder communities in an effort to understand the present and future needs of this challenge and identify potential solutions.

Food crisis is cited by 25% of respondents. Despite its vast expanse of arable land, productivity in the agriculture sector has been virtually stagnant over the past decades in stark contrast to other regions, such as South-East Asia, that have leveraged the green revolution. Despite the sector’s potential, the region registers the highest incidence of undernourishment of its population worldwide, importing food staples valued at about $25 billion annually, essentially because food production, supply and consumption systems are not functioning optimally. Increasing regional preparedness will entail raising the sector’s productivity by focusing on the development of agricultural value chains integration to boost African farmers’ benefits and create an agribusiness industry. The World Economic Forum is introducing a Global Challenge Initiative on Agriculture and Food Security.

Not surprisingly, the spread of infectious diseases ranks high and is cited by 23% of the respondents. While the Ebola outbreak and difficulty of containment in West Africa – featuring 26,000 suspected or confirmed cases and over 11,000 Ebola-related deaths – features most prominently in the public memory, other infectious diseases continue to rank highly. Communicable diseases including HIV, malaria and tuberculosis prevail in the region compared with, for example, Latin America and the Caribbean and South-East Asia, and overall life expectancy amounts to just 50 years on average, compared with over 70 years in the other two regions. Reducing the spread of infectious diseases and ensuring the overall health of the region’s growing working-age population will be critical in the future.

Two geopolitical risks – interstate-conflict with regional consequences and large-scale terrorist attacks are cited by every fifth survey respondent. The incidence of terrorist attacks has risen in the region in the past three years – most notably in Nigeria and East Africa. According to the Global Terrorism Index, seven out of 13 economies that have been identified as being at risk of increased terrorist activity from current levels are African.

On a higher level, societal and geopolitical risks dominate concerns about regional preparedness. The Top 10 risks of least preparedness further include the societal risks of failure of urban planning and profound social instability, as well as the geopolitical risks of state collapse or crisis and the failure of national governance. The latter two are even more worrisome as they touch the core of the functioning of a state – weak rule of law, corruption, illicit trade, organized crime, impunity or political deadlock up to a complete state collapse prevent stakeholders from building resilience to global risks.

Global risks don’t recognize borders or spheres of influence. To build regional preparedness, concerted efforts by all stakeholders are, therefore, needed to increase the region’s preparedness and resilience. At the 25th World Economic Forum on Africa, regional and global leaders from business, government and civil society are coming together to seeks solutions to many of these challenges.

Image: Women sell vegetables in a market in Monrovia, Liberia, October 1, 2014. The threat of hunger is tracking Ebola across affected West African nations as the disease kills farmers and their families, drives workers from the fields and creates food shortages. REUTERS/James Giahyue

Why vaccines are the only real solution to pandemics, according to Gavi

Africa has a COVID-19 time bomb to defuse

Here's how Africans are using tech to combat the coronavirus pandemic

COVID-19 in Africa: insights from our media briefing with WHO