How does immigration affect trade in services?

The volume of international trade in services has grown rapidly over recent decades and, in fact, has outpaced growth in goods trade. Over the period 1980 to 2011 global goods trade grew on average by 7.3% annually, while services trade grew by 8.2% per year (WTO 2013). Over the same period many developed countries experienced rapid growth in immigration.

In a recent NBER Working Paper we explore this link, focusing on potential channels through which immigrants to the UK either promoted or ‘substituted for’ trade in services between the UK and its trading partners (Ottaviano et al 2015). In doing so we rely on two data sources, the International Trade in Services (ITIS) survey and the Quarterly Labour Force Survey (QLFS). These data allow us to distinguish between 42 service types, which we use to explore the relationship between firm-level exports and imports of these services and the changing pool of immigrant workers in the firms’ local labour markets, drawn from the QLFS.

Figure 1 breaks down UK services exports and imports by service category, documenting the dominant role of business services and royalties and licensing agreements in both imports and exports. These are services that require a significant amount of country-specific and institution-specific knowledge. 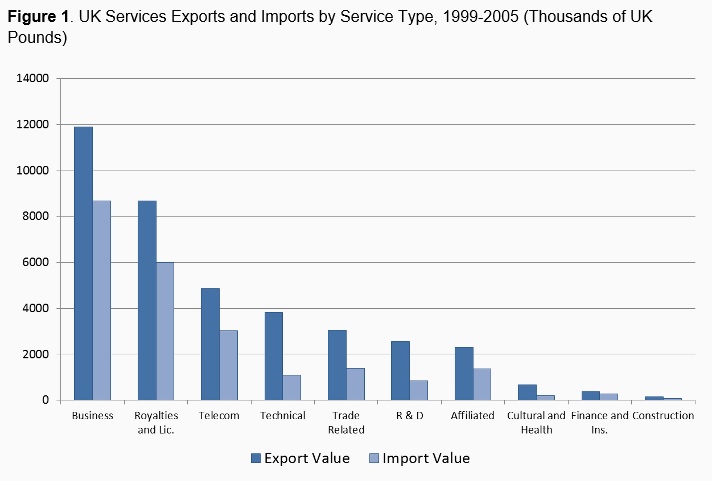 Our findings indicate that immigrants promote exports of final services, overall and in particular to their countries of origin. We also find that they reduce imports of some types of intermediate services. In addition, we find that these effects are stronger when the trading partners are more culturally and institutionally dissimilar.

How do immigrants impact services trade?

Immigrants may reduce the costs of exporting or importing services to and from their home country by helping domestic firms overcome cultural and institutional barriers with the foreign market (e.g., Gould 1994, Head and Ries 1998). Relative to trade in goods this cost reduction may be particularly important, since providing a service abroad often requires an understanding of cultural specificities that goes well beyond what is required when selling a physical good abroad. For instance, selling business services overseas will require a firm to possess a nuanced understanding of the business culture in the foreign market, while selling legal services abroad will clearly require a detailed knowledge of the legal system.

At the same time, our previous research (see Ottaviano et al 2013) suggests that immigrants may reduce imports of intermediates as they substitute for work that is otherwise performed by workers in their home country and then imported. In other words, domestic firms may be faced with the decision to hire a local immigrant worker from a particular country or, instead, to ‘offshore’ that work to foreign workers in that country and import the finished product. As a result, immigrants may also affect imports of intermediates services.

Finally, in addition to the potential reduction in bilateral trade costs, immigrants may foster services trade to all destinations by increasing the overall productivity of the firm, thereby increasing the profits associated with overseas sales (e.g., see Grossman and Rossi-Hansberg 2008, Harrison and McMillan 2010, Wright 2014, Baldwin 2010, Baldwin and Robert-Nicoud 2010). Potential sources of these productivity gains are a ‘diversity effect’ (Ottaviano and Peri 2005, Brunow et al 2013), in which immigrants foster creativity and help generate new ideas, and a ‘specialization effect’ (Peri and Sparber 2009), in which immigrants possess a comparative advantage in performing certain production tasks, allowing for greater division of labour within the firm. When these gains are large enough and firms face fixed barriers to exporting the gains may help firms to overcome these barriers and access foreign markets they might not otherwise serve.

Linking immigrants and services trade in the data

The goal of our empirical analysis is to estimate the causal relationship from immigration to trade in services. Unobservable omitted variables, such as a booming local labour market that increases trade activity and, at the same time, attracts immigrant workers, would introduce spurious correlation and bias our estimates. However, we can avoid such spurious correlation by focusing on that part of immigration flows that can be explained by the historical patterns of immigration and their network effects. To the extent that immigrants settle in some areas to be near their compatriots, the historical settlements of each immigrant group will be both a good predictor of the current settlement patterns of that group and, at the same time, unrelated to current economic conditions in that area (Altonji and Card 1991, Card 2001). We exploit this fact and construct the ‘network-driven’ inflows of immigrants and we track their causal impact on the service trade of firms in the local labour market.

Our study finds that a one percentage point increase in immigrants from a particular country into a local labour market leads firms in that area to export 6 to 10% more services to that country (a bilateral effect). We find that this effect is driven primarily by export growth among firms already serving the market rather than by new firms entering the market. Furthermore, this effect is strongest for services that are intensive in the use of language and legal expertise while it is not significant for the export of technical services. These findings are consistent with the view that for services in which the cultural content plays an important role immigrants are an effective channel of services-trade creation. Further in support of this view, we find that the effects are two to three times larger when exporting to non-Anglo-Saxon countries relative to Anglo-Saxon countries.

Second, we find a role for the aggregate share of immigrants in a local area on UK services exports, above and beyond any effect due to the bilateral cost reduction. This effect is approximately four times smaller than the bilateral impact, and it suggests the existence of productivity gains associated with immigrant labour. We also find that this effect not only induces firms to export more to their existing partners, but also promotes entry of new firms into previously untapped markets. Specifically, we find that a one percentage point increase in the aggregate share of immigrants in total area population led to a 0.10% increase in the probability that a firm exported some services. These effects were also strongest in the case of language- and legal-intensive service types, suggesting that immigrants are key to overcoming cultural barriers to trade.

Finally, as noted above, immigrants may reduce imports of intermediate services. We find strong evidence for this effect, and once again it is almost exclusively due to trade in language- and legal-intensive services—i.e., services with high cultural and institutional content. Overall we find that bilateral offshoring (imports of intermediate services) with an immigrant’s country of origin fell by 1% per year in response to a three-percentage point increase in immigration from that country.

International trade in services and immigration are among the fastest growing aspects of globalisation. We find that there are economically important links between these phenomena, and this implies that immigration policies may impact the export and offshoring activities of services firms. Specifically, since trade in services requires the overcoming of cultural and institutional barriers to a much greater extent than trade in goods, the role of immigrants in facilitating services trade may be critical and quantitatively more relevant than in facilitating goods trade. At the same time, we find that for services with important cultural content, immigrants may reduce the offshoring of those services, an important nuance in the immigration-trade link.

Gould, D M (1994) “Immigrant links to the home country: Empirical implications for US bilateral trade flows,” The Review of Economics and Statistics, pp. 302-316.

Harrison, A and M McMillan (2010) “Offshoring jobs? Multinational and US manufacturing employment”, Review of Economics and Statistics.

Car use is expected to become increasingly prevalent in Asia over the next 30 years, with large inequalities in infrastructure between rural and urban areas driving motorization.

How women are staking out a space in the blockchain world